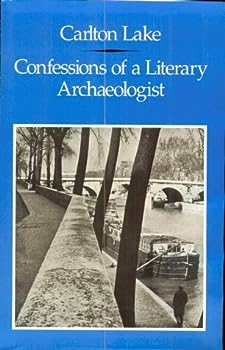 Confessions of a Literary Archaeoligist: Memoirs

The author recounts his experiences in building collections of rare books and manuscripts of French literature, and reveals little-known facts about French artists, composers, and writers.

Published by Thriftbooks.com User , 14 years ago
Carlton Lake has written a superbly readable book of eleven of his actual exploits in search of manuscript works of French literary and artistic giants (roughly from 1890 to 1960). Each chapter is a separate mystery to be solved, sometimes lasting many years, and sometime ending in revelations that radically altered the way in which the authors (e.g. Paul Valèry) and artists (e.g. Henri Toulouse-Lautrec) are viewed. The setting is almost always in France, usually in Paris, since that is where Carlton Lake lived for many years, during which he wrote as the Paris art critic for the Christian Science Monitor. He amassed a collection so vast that it was eventually transferred to the Harry Ransom Humanities Research Center at the University of Texas at Austin, where he served as curator of the collections that researchers now flock to see. The book reads almost as a who's who of major French authors and some artists, giving intimate glimpses of their lives. For anyone familiar with French authors and artists of the period of Carlton Lake's interest, this is a wonderful gem.

Best book on the subject

Published by Thriftbooks.com User , 21 years ago
This book is simply the best. I enjoyed every page of it, and found myself mesmerized by all the information contained in the book. I was hesitate on buying the book because of the price, but was pleased to say that after reading the book very quickly just one time, I went to a yard sale and picked up two books for 50 cents each, and they are worth more than 50 dollars for each one. You can't go wrong in getting this book. Trust me.
Trustpilot
Copyright © 2022 Thriftbooks.com Terms of Use | Privacy Policy | Do Not Sell or Share My Personal Information | Accessibility Statement
ThriftBooks® and the ThriftBooks® logo are registered trademarks of Thrift Books Global, LLC