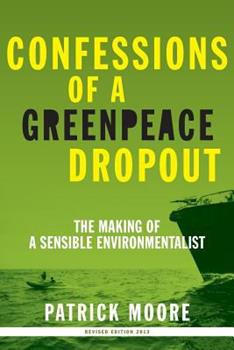 Confessions of a Greenpeace Dropout: The Making of a Sensible Environmentalist

Confessions of a Greenpeace Dropout: The Making of a Sensible Environmentalist is Dr. Patrick Moore's engaging firsthand account of his many years spent as the ultimate Greenpeace insider, a co-founder and leader in the organization's top committee. Moore explains why, 15 years after co-founding it, he left Greenpeace to establish a more sensible, science-based approach to environmentalism. From energy independence to climate change, genetic engineering...

Published by John Doe , 1 year ago
Starting with his upbringing in a rural Canadian logging community, Moore's text weaves its way through his early life up to his honest and well-intentioned founding of Greenpeace, the flagship environmental group of the past 50 years. From there it details his 15 years of involvement in various campaigns (anti-nukes, anti-whaling, etc.) before he quit the group due to its increased radicalization and departure from any sort of scientific foundation. The rest of the book chronicles decades of dishonesty and zealotry of the wider environmental movement, covering everything from their opposition to actually-sustainable energy (nuclear) and genetically modified crops to PVC, BPA, and a host of other life-saving technologies. Most disturbing of all was the multi-year ban on using DDT for preventing malaria, during which time 50 million people died from the mosquito-transmitted disease, effectively putting Greenpeace on par with Lenin and Mao for number of lives taken.
Trustpilot
Copyright © 2022 Thriftbooks.com Terms of Use | Privacy Policy | Do Not Sell My Personal Information | Cookie Preferences | Accessibility Statement
ThriftBooks® and the ThriftBooks® logo are registered trademarks of Thrift Books Global, LLC