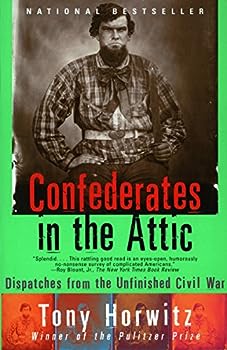 Confederates in the Attic: Dispatches from the Unfinished Civil War

NATIONAL BESTSELLER - A Pulitzer Prize-winning war correspondent takes us on an explosive adventure into the soul of the unvanquished South, where Civil War reenactors, battlefield visitors, and fans... This description may be from another edition of this product.

The Civil War Is Still Being Fought In 10,000 Places

Published by Thriftbooks.com User , 15 years ago
Tony Horwitz, winner of the Pulitzer Prize, takes to the road yet again, traveling from state to state in the American south, delivering one of the best guides to contemporary American attitudes on a specialized subject that's ever been written. In large part the intelligently penned and entirely addictive Confederates in the Attic is a mythbusters for the Civil War crowd. I know Tony Horwitz, author of Baghdad Without A Map, didn't intend it that way, but how else can you see this enjoyable travelogue when every chapter dispels at least one nugget of falsely cherished American folklore? Permit me to mention but a few: General Robert E. Lee, that beloved "marble man" iconic hero of admirers the world over, someone oft-billed as a non-slave owning Virginian, actually owned slaves until the end of 1863. The infamous Hornet's Nest at Shiloh was in reality not the centerpoint of the battle, and in fact was among the least hotly contested and bloody spots on the sprawling field. The first shots of the war were, as everyone knows, fired in Charleston Harbor, but not at Fort Sumter in April 1861, rather in January of that year at a Northern steamer called Star of the West. Henry Wirz, the infamous commandant of the Andersonville "concentration camp" in southern Georgia was executed as much for his refusal to implicate his superiors as for his supposed mismanagement of the Hell-ish camp. Horwitz also refers to Traveller, Lee's most famous mount (more favored by the General than his secondary steed, Ajax) as a "she". Assuming this was not a typo, then how many knew General Lee rode through the war on a mare? But this book is much more than a mere exercise in mythbusting. It stands as an exploration of how the Civil War still affects the culture in which we Americans live today. One thing Horowitz exposed was how ignorant of the conflict too many modern Americans are. In one of his final chapters he revealed that even in Alabama, heart of Dixie, only half of college-age individuals could name a single Civil War battle. Horwitz's meeting with an Georgia-based representative of a pro-Confederate heritage special interest lobby pointed out the thought-provoking fact that those who revile the supposed racism inherent in the flying of the Stars and Bars should bear in mind that our own national flag, Old Glory herself, flew over legalized slavery for nearly half its history as a symbol. And those sorts of factoids are what makes Confederates in the Attic so compelling. It opens the mind even as it interests a reader on a more personal and broader level. It's a lot of fun to tag along through the pages of the longest chapter of the book, the winsomely named "Civil Wargasm" and be a party to stories of camping in the dead of night on Antietam's Bloody Lane or to pore over paragraphs concerning the final resting place of Thomas Jackson's amputated arm, but it's even more rewarding to wrestle with the philosophical challenges one encounters scores of tim

Published by Thriftbooks.com User , 18 years ago
Although I don't know more than the average person about the Civil War, I've always had a sneaking suspicion that it is still with us somehow. Tony Horwitz's "Confederates in the Attic" confirmed that suspicion and in a most amusing, touching, and balanced way.A War reenactor friend recommended I read the book. We were talking about the modern-day states rights concerns and he said that the debate had its origins at Fort Sumter. So, I picked up the book thinking it would simply be a survey of what I now know is called neo-Confederate thought. But I was more than a little bit thrilled to find that it was not just a sociological study, but also a travelogue-probably my favorite kind of book.After returning to the States from an extended time abroad, Horwitz's childhood interest in the Civil War-and especially Rebels-was rekindled after a band of hardcore reenactors showed up in his yard on their way to a battlefield. Soon he began to tour the South visiting relevant War sites and interviewing the Confederate descendants that kept that cause's heritage alive. Horwitz's has an amazing gift for storytelling and it shines through in this book. He has an uncanny ability to come across mundanely interesting characters in his travels and to write their stories with an original verve.The book is also balanced. Although he is a Yankee, Horwitz's affinity for the Rebels is evident. But he checks that affinity with a good dose of history and reality. He conveys the notion that the South's resentment of the North is not wholly unjustified, but actually often well placed. At the same time, though, he illustrates the willful naivete that makes Gods of Confederate generals and that forgets the Old South's uglier sides. Horwitz manages to do all this while highlighting not just the tragic, but also the fun and curious stories of the Civil War and its remnants today.Every American should strive to learn a bit more about the War, and this is a great place to start. It's a fun, touching read that demonstrates why that chapter in our history is still important-and indeed still with us-today.

Proof of Why the South Can't Rise Again. It Never Fell.

Published by Thriftbooks.com User , 23 years ago
An excellent read. I couldn't put it down. An excellent and funny account of one man's journey to understand his own and the present day South's obsession with the Civil War. I wish more of the unreconstructed rebels who live in the South today could take themselves with the same amount of seriousness and humor that Mr. Horwitz does. I spent my first 18 years in Massachussetts, and the last 18 in North Carolina, and this is the best and most balanced account of understanding how and why the Civil War is still so important in the South. Mr. Horwitz does a service by showing that all devotees to the Lost Cause are not right wing crackpots from the bottom rungs of the socio-economic ladder. He shows there are as many reasons for the devotion as there are devotees. I hope many in the South note his observations concerning the ongoing urbanization of the South with all the strip malls and fast food joints covering up and encroaching upon the battlefields and formerly rural communities. While I am out of sympathy with the Confederacy and what it stands for, I wish that the historical sense Mr. Horwitz found throughout the South at all levels was as strong in the North. As many of these reviews indicate, Northerners just want the South to "get over it", but that's easier said than done. Mr. Horwitz shows there are too many reminders, living and marble and concrete for Southerners to just get over it. On the other hand, he also revealed among many of the people he met, an appalling lack of knowledge of the facts of history. I recommend this book as a starting point for learning more about the war and its consequences for the South and the Nation, so the memory of the Confederacy won't be abused as it is now by many groups that use it to justify and legitimize their stands and actions. This book is for anyone who wants to understand the mind of the South today. You don't have to be a Civil War buff or Daughter of the Confederacy to enjoy it.

History is never dead, it isn't even past. --Wm.Faulkner

Published by Thriftbooks.com User , 23 years ago
This is a book that students of the Civil War and especially history teachers should read. Tony Horwitz has done what just about every student of history would like to do: travel across the Old South, following the armies, visiting the battlefields, and even joining "re-enactors." But this is much more than a nostalgic visit. Horwitz asks questions of himself and those that were willing to talk with him and discovers many disturbing, even frightening things about our nation. History teachers will cringe, weep, laugh, (and perhaps change professions) as they read of his conversations with the myriad persona who talked with him during his sojourn. Perhaps, most disturbing is the concluding chapters where he discovers that not only has the war not solved any problems, it has left a legacy of a fractured nation based on race, section, ideology, and political lines. I recommend this book most highly. As a teacher -- who happens to be teaching the CW at present -- it is sobering and refreshing, a reminder that (as Faulkner said), the past is, indeed, never dead.
Trustpilot
Copyright © 2022 Thriftbooks.com Terms of Use | Privacy Policy | Do Not Sell My Personal Information | Cookie Preferences | Accessibility Statement
ThriftBooks® and the ThriftBooks® logo are registered trademarks of Thrift Books Global, LLC