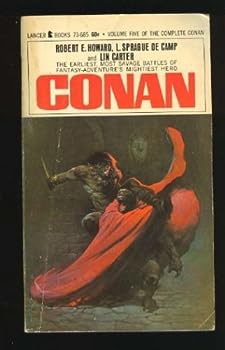 (Part of the Conan the Barbarian Series, Conan - The Lancer/Ace Editions (#1) Series, and Drakar & Demoner (#1) Series)

This description may be from another edition of this product. Tells the story of countries torn by armed insurgences & clarifies the causes of each conflict. It provides the broad viewpoint necessary for understanding them in the historical terms of guerrilla...

Published by Thriftbooks.com User , 21 years ago
If you enjoy fast-paced, imaginative stories with skull after skull cloven like a ripe melon, then this series is for you.

Published by Thriftbooks.com User , 21 years ago
I have always loved Conan series. Robert E Howard is a true master of storytelling and adventure. He introduced me to sword and sorcery, and I have not found any better. I wish some publisher would rerelease these in a complete bound edition with the incredible Frazetta pictures as an insert. I don't have my dog eared editions from my youth anymore and I want to read them again.

Published by Thriftbooks.com User , 21 years ago
This is the first of the Lancer Books collection of Conan stories, which were edited for publication in 1966 by L. Sprague De Camp, a REH fan who had access to the estate of Howard's literary agent. De Camp 'completed' several Conan stories from outlines found after Howard's 1936 suicide. 2 of the stories included ("The Hall of the Dead" and "The Hand of Nergal") are 'completed' stories; they are fair pastiches of other REH adventures. Another 2 stories are by De Camp and fantasist Lin Carter ("The Thing in the Crypt" and "The City of Skulls".) I thought them pretty poor.The original Howard tales, however, are superb stories and amoung the best of the Conan cycle. They are:"The Tower of the Elephant", in which Conan follows a master thief into a mighty wizard's abode, and unleashes a supernatural revenge;"The God in the Bowl", in which Conan burgles a museum and uncovers a supernatural revenge; "Rogues in the House" is a clever combination of violence and intrigue as Conan is hired to assassinate a powerful priest;And first and least, "The Hyborian Age", Howard's introduction to his hero's period and environment.

The First book in the Greatest swords & sorcery saga written

Published by Thriftbooks.com User , 22 years ago
Robert E. Howard is truely the master of fantasy. This is the first installment of the conan saga. This book has the first eight short stories of Conans life written by Robert E. Howard and edited by L. Sprague De Camp and Lin Carter. These stories are fantastic well written swords & sorcery by the man who started the craze. The battles in the book are so vivid that you can feel the blood splashing your face as Conan cuts his enemy down. His emotions are so well written that you can feel Conans despair as he faces his greatest fears. Heck by the end of the book you miss the guy. This book has it all fights, drinks, booty, women, and high adventure. Conan was fun and entertaining to read I reccomend it to all swords & sorcery fans. If you like this book or are interested in more swords & sorcery then I reccomend these titles: the whole conan series, Brakk the Barbarian by John Jakes, Flashing Swords edited by Lin Carter(short stories), Swords and Deviltry by Fritz Leiber.

Conan, a runaway slave, is new to civilization

Published by Thriftbooks.com User , 23 years ago
Conan, a runaway slave, is new to civilization and has to turn to a life of crime. Ultimately, he becomes a pirate, a mercenary soldier in the various Hyborean kingdoms, and finally the king of Aquilonia, when he kills the depraved King Numedes. Conspirators plot to overthrow and kill him. He's taken prisoner twice and has to win back his throne from the usurper Valerius. On his wedding day, his bride's stolen by a Khitan wizard, and he searches the world for her. He tracks the wizard Thoth-Amon to his hideout in Sytgia, and defeats him. He visits Epimetreus the Sage for one last time and he tells him to abdicate in favor of his son, Prince Conn, and head out to stop the Red Shadows. That was his last adventure. Blair Colquhoun @cybertours.com
Copyright © 2020 Thriftbooks.com Terms of Use | Privacy Policy | Do Not Sell My Personal Information | Accessibility Statement
ThriftBooks® and the ThriftBooks® logo are registered trademarks of Thrift Books Global, LLC