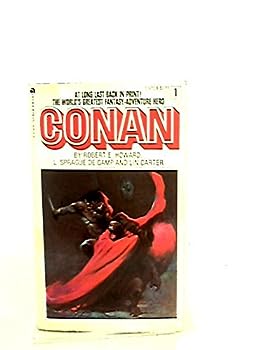 This description may be from another edition of this product. "The lustiest adventurer in the world battles monsters, demons and magic in three of the mighty Cimmerian's most fantastic tales: Red Nails, Jewels of Gwahlur and Beyond the Black River."

Published by Thriftbooks.com User , 14 years ago
This L. Sprague de Camp edited version is basically Red Nails, Jewels of Gwahlur and Beyond the Black River : Conan the Warrior : Red Nails - Robert E. Howard Conan the Warrior : Jewels of Gwahlur - Robert E. Howard Conan the Warrior : Beyond the Black River - Robert E. Howard Conan is travelling, finds a dead woman, and then encounters Valeria of the Red Brotherhood. After trading some insults, they have the misfortune to stumble across a dragon. Then they have fun in an abandoned city full of crazed warriors, two evil, leering royals, all the great stuff in this tale of a fantastic partnership. 5 out of 5 To quote Mr. Howard - "Conan was basically a direct-actionist. Such subtlety as he possessed had been acquired through contact with the more devious races." For military reasons, Conan has to get the Teeth of Gwahlur from their hiding place in a mystic castle before his political and military opposition. He decides he can get the girl Muriela to run the same scam she tried on him, on some others. The only problem is that the real goddess Yelaya shows up! Then it is time to scarper, sharpish. 4.5 out of 5 Conan is working around a fort on the border of Aquilonia, when many tribes of Picts, united by the wizard Zogar Sag, combine to attack. Conan takes out a scouting party to see what goes on, but they are ambushed, and most captured and killed, except one man, that he rescues. The wizard summons beasts by virtue of the powers of an old god, whom Conan is familiar with. With the help of an old dog, Slasher, Conan and his companion try and get the settlers to safety, while the fort is overrun. Zogar Sag makes a mistake when he sends a fleshly avatar to try and destroy Conan. The barbarian kills the avatar, which destroys the wizard, and the Pictish invasion is over. 4.5 out of 5

One of the Best Conan novel's I've read

Published by Thriftbooks.com User , 23 years ago
This is Robert E. Howard's best Conan novel, in my opinion. In one of the stories, Conan is forced to battle a prehistoric lizard, and outwits it rather than using "mighty thews" and "barbaric primal fury". Also, at the end of the same story, Conan is actually trapped for a while, and doesn't kill the main arch-enemy, but has to settle for eliminating the last bit of sword fodder. Overall, a good book.
Copyright © 2020 Thriftbooks.com Terms of Use | Privacy Policy | Do Not Sell My Personal Information | Accessibility Statement
ThriftBooks® and the ThriftBooks® logo are registered trademarks of Thrift Books Global, LLC