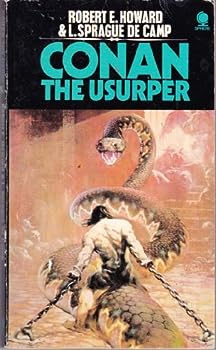 This description may be from another edition of this product. Under a sentence of death for his part in the winning the war for Aquilonia, Conan escapes from the jealous king intent on killing him and plots his revenge. Reissue.

Published by Thriftbooks.com User , 14 years ago
There are four stories in this book. The Black Stranger, Wolves Beyond the Border, The Phoenix on the Sword and the Scarlet Citadel. A tale of three brigands, that starts slow, and then rip-roars along. With multiple pirates, you know there has to be a treasure map. This time, to the Treasure of Tranicos. Add in a mystical demon warrior, a bunch of raiding Picts, a couple of sieges, three pirates that can't trust each other, a beautiful woman, and Conan, and all hell will break loose. 4 out of 5 This is pretty much a Conanless Conan story. Conan is away fighting in Aquilonian and we follow a man in the Westmerck near the Picts as he encounters shapeshifting and beast magic. 2.5 out of 5 King Conan is bored. Politics and statecraft and maps, and all that stuff. In a dream, a man magically enhances his sword, and that certainly comes in handy later when the odd traitor and demon relieves the tedium of the ruling class. 3.5 out of 5 King Conan's army of Aquilonians has been smashed by a far superior force, led by a wizard. Conan refuses to sign over his kingdom, and the wizard throws him in a dungeon. He escapes an assassin and a monster, and rescues a wizardly rival that Tsotha had imprisoned. This wizard, please, summons a flying steed to bear Conan back to his kingdom, to take revenge. 4.5 out of 5

The Best of the "Original" Lancer Books Conan Series

Published by Thriftbooks.com User , 21 years ago
When Lancer Books reissued the original Conan stories by Robert E. Howard, they enlisted the aid of L. Sprague DeCamp and Lin Carter to polish Howard's grammar, soften his more "politically incorrect" statements, and fill out the saga with pastiches. DeCamp and Carter wrote several stories out of whole cloth, but they also reworked a number of Howard stories starring other heroes into Conan stories. There was more DeCamp than Howard in this particular volume, and I am convinced that DeCamp could write Conan better than Howard could.

Published by Thriftbooks.com User , 23 years ago
Conan finds the accursed Treasure of Tranicos, the legendary treasure of the Pirate King Trani- cos, who stole it with his crew from a pyramid in Khemi, Stygia, and meets Tina and Belosa. Exiles with their lord, from Zingara, Valbroso's visited by a rival pirate and then another rival buccaneer shows up. The two rivals want Conan to lead them to the Treasure of Tranicos but Conan refuses. He tells them that it's cursed and he won't lead them to it. When they want him to do it anyway, he takes them on. He escapes to lead the rebellion against the tyrannical king of Aquilonia. Blair Colquhoun @cybertours.com
Copyright © 2020 Thriftbooks.com Terms of Use | Privacy Policy | Do Not Sell My Personal Information | Accessibility Statement
ThriftBooks® and the ThriftBooks® logo are registered trademarks of Thrift Books Global, LLC