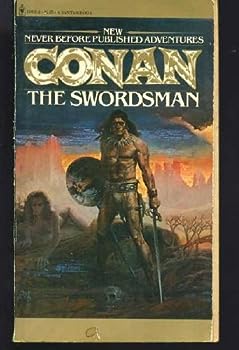 This description may be from another edition of this product. Imagine a world of gods and demons, where men are warriors, women are beautiful, life is a fantastic adventure, and the fate of kingdoms balances on the bloody blade of a fabulous hero: Conan of the...

Published by Thriftbooks.com User , 13 years ago
Many of the pastiche works are letdowns in comparison to Howard's immortal stories, though there are exceptions. What most of the books miss is faithful adherence to the established character of Conan, as opposed to some fellow who does X, Y, and Z and happens to be named Conan. This is not the case with these delightful tales by de Camp, Carter, and Nyberg. By sticking to a shorter length tale, they have succeeded in packing more emotional punch into the individual adventures. I was most struck by the entry called "Shadows in the Dark"--because it represented the real Conan, the one I know, better than any other non-Howard work. In the span of only a few short pages, Conan (in addition to the major plot elements) abuses an arrogant young king; knocks said king senseless because he blabbers and could thus disclose their position to the enemy; considers murdering him (but relents); steals his purse, minus a handful of coins; and, finally, leaves the king stranded on a ship to Lord-knows-where. Now, that's the Conan we all love!

Published by Thriftbooks.com User , 14 years ago
This book includes these pastiche stories, de Camp, Carter and Nyberg in various combinations : Legions of the Dead The People of the Summit Shadows in the Dark The Star of Khorala The Gem in the Tower The Ivory Goddess Moon of Blood and also a piece by De Camp on the naming strategies that Howard used in his work, and also gives an dictionary style listing of them, and where they are used. A young Conan is fighting in the North, and against the Witchmen. He rescues his jarl's daughter from captivity, but the Queen sends an undead band of their former warriors to stop them. He manages to get the girl to freedom before being taken captive. 3 out of 5 Conan and companions are attacked by weird apes with ropes, killing one of them. He fakes being strangled, and is drawn up to the remants of a strange people with no irises. He manages to save the girl, and kill the many legged monster. 2.5 out of 5 After Black Colossus, Conan is still serving Yasmela. Not servicing her enough is his problem, even though he has a general. She is too busy with the duties of a queen. If Conan can get her captive brother back, this may change. After betrayal by a travelling companion and rescue of the king, who doesn't think much of a barbarian in the family, and offers Conan a lesser post. Conan takes money in payment, and starts to go back. He changes his mind, and decides to leave, and seek adventure elsewhere. 3 out of 5 After Shadows in Zamboula, Conan arrives in Ophir. He sees things are not right, and soon finds out why. The king and others plot against the queen, and problems abound. Conan rescues the female noble head, but ends up under siege. No mean shot with an arbalest, the queen uses the Star of Khorala to summon aid, allowing Conan, the Guard Captain and herself freedom. She leaves for Aquilonia with her military man, and Conan goes on his way. 3.5 out of 5 Following Drums in Tombalku, Conan ends up serving under another Captain. One night, he dreams of a bat-man, only to awaken and find he is real, the product of a dead sorcerer. 3 out of 5 Conan is still travelling with the actress Muriela after Jewels in Gwahlur. He thinks that her skills could be put to use in a similar scam. However, an actual goddess has a suse for her body in a lot more pragmatic a manner than impersonation. She spares the Cimmerian and says she will look after the girl when she is finished. 3.5 out of 5 Conan is still beyond the Black River, fighting the Picts with the Aquilonians. Serpent sorcery and a traitorous General are causing lots of problems. Conan's axework and fast thinking puts paid to this, and gets him a promotion. In fact, he does so much damage with the aforementioned weapon that both Kull and Druss the Legend would be more than a little impressed. 4 out of 5

Howard Fans Will Enjoy This Homage To The Master

Published by Thriftbooks.com User , 15 years ago
Though nothing compares to Robert E. Howard's original Conan stories, these additions to the canon by Carter and de Camp and Nyberg are welcome newcomers to the mythology. Those unfamiliar with Conan should begin by reading the originals-- several good editions now exist of Howard's seminal stories. Once competed, there are lots of these volumes of stories based on the originals, and this is among the best. de Camp and Carter have a real flair for mimicking Howard, and they clearly revel in the fun of creating new fixes for the barbarian to escape from. The book also includes a nearly 70-page (!) addendum with all the names Howard made up in his stories, everything from Abdashtarth to Zyras, with notes from de Camp on their derivation. Fun stuff for fans!

Published by Thriftbooks.com User , 19 years ago
CONAN THE SWORDSMAN, the latest reprint of the now legendary 1970s-1980s Conan revival, is a marvelous short story collection. Each story holds its own with the overall Conan mythos and most add depth to the celebrated character and his world. The delightful eight stories are well written with each tale co-authored by L. Sprague de Camp (had to be a Howard clone) with either Lin Carter or Bjorn Nyberg. Especially good is "Legions of the Dead" that Robert E. Howard would have believed he authored because it reads so much like his original works. Equally fascinating to readers is a seven-page essay that provides plenty of insight into Conan and his world as well as Robert E. Howard from the late L. Sprague de Camp's perspective. Fans of Conan will want to read this wonderful anthology that showcases one of fantasy's most endearing and enduring protagonists.Harriet Klausner
Copyright © 2020 Thriftbooks.com Terms of Use | Privacy Policy | Do Not Sell My Personal Information | Accessibility Statement
ThriftBooks® and the ThriftBooks® logo are registered trademarks of Thrift Books Global, LLC