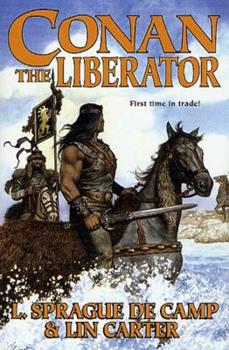 Aquilonia, once the proudest land in all of Hyboria, has fallen under the tyrannical reign of a mad king. As his brutal insanity sweeps the land, only one man dares stand against him: Conan the barbarian. Conan becomes the leader of an army of rebels, brave warriors who thought their battles would be fought with spear and sword, axe and dagger. In this they were mistaken, for their greatest foe is not the army of Aquilonia, but the vile sorcerer Thulandra...

How Conan Became a King

Published by Thriftbooks.com User , 16 years ago
In this novel, DeCamp and Carter tell the story of the Cimmerian's oft-mentioned revolt agains King Numedides of Aquilonia. Manipulating the madness of the king is Stygian wizard, Thulandra Thuu. (For those of you familiar with the works of Lin Carter, you gotta know that name was from Lin). Carter and DeCamp find a way to maintain the suspense even though any Conan fan knows the outcome of the story. The story shifts between Conan's inexorable march to Aquilonia and Thuu's attempts to stop the rebel army. Numedides is an excellent character, nasty and pitiful at the same time, every character in the book knows what's going on except him.

Published by Thriftbooks.com User , 19 years ago
A fortyish Conan leads an army trying to overthrow the maniacal tyranny of king Numedides of Aquilonia. Conan believes his rebel force has a great chance of defeating the king's forces led by General Procas and consequently expects to topple a monarch who abuses children and kills concubines on some of mad whim.Conan and his advisors anticipate and plan a war they expect fought in which blade goes against blade. Instead, the evil sorcerer Thulandra Thuu and his servant Alcina intercede. Soon a mysterious illness threaten to do what the king's forces have failed to do, destroy the rebel army unless Conan can find some way of saving himself, his soldiers and ultimately the people of Aquilonia.This is a reprint of an exciting sword and sorcery tale released over two decades ago. The story line is fast-paced and loaded with non-magical and esoteric action as expected from the novels starring the pre-history hero. Conan remains dauntless while trying to do what he believes is right while his deadly foe Thuu will return for another day (or is that novel - if this reviewer's memory holds see CONAN THE SWORDSMAN).Harriet Klausner
Copyright © 2020 Thriftbooks.com Terms of Use | Privacy Policy | Do Not Sell My Personal Information | Accessibility Statement
ThriftBooks® and the ThriftBooks® logo are registered trademarks of Thrift Books Global, LLC