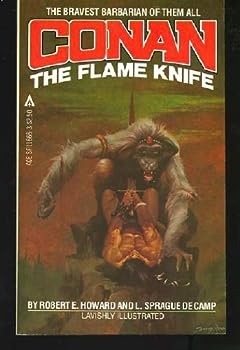 This description may be from another edition of this product. Book by Robert E. Howard, L. Sprague de Camp

The Voice of a Cimmerian

Published by Thriftbooks.com User , 19 years ago
Besides Robert E. Howard's suicide at the age of 30, the greatest tragedy of this brutally talented writer is that his work has not enjoyed the literary praise and societal acceptance that it so clearly deserves. Howard is one of the most overlooked authors of the last century, in part due to academia's refusal to seriously study the Fantasy genre. Conan, Howard's greatest character, lives, prowls, "wenches", boozes, adventures, and cajoles among the paperback pages of this first Conan book, due entirely to Howard's distinct narrative voice. The reader feels the flexing muscle and sinew, the weathered and tanned skin, the animal reflexes, the very strength in Conan's mercenary grip when they read these short stories - beyond Howard's brilliance at character creation, the very narrative voice is written in the tune of savage ruthlessness. No matter your sex, you can't help but boil with testosterone and reel in the wicked pleasure of cleaving cut-throats with a broadsword, because the simple and powerfully persuasive narrative voice places you in Conan's world. Howard's delicate and meticulous word choice not only provide the uniqueness of his voice - a style rich with texture, details, and cinematic imagery - but it also provides the barbarian lens by which we view his world. The stories are often dripping with blood, but the imagery is so vivid and artistic it in no way diminishes the quality of the text. The knocked out teeth and the crimson sprays seem natural, because they're natural to Conan. Few authors have ever displayed such a profound ability at placing the reader into a character's blood, brain, and hormones. Conan, after all, is not the stereotypical Hollywood action hero - he is a character designed with his own unique combination of strength and flaws. Flaws found in all humanity. He may be built and wired like a Siberian tiger, but he is plagued with a deeply embedded fear of the supernatural. His temper often gets the better of him. When times are good and the riches spill from his saddlebags, he's a boastful braggart that earns the unforeseen whack at the end of a dark alley. When times are tough, he hits the goblet. He's everything we want to be and one of us when we need him to be. Howard's voice and style make all of this possible. This first book in the Conan series displays that voice of reluctant role model as good as any other. Finding a copy may be difficult, but for the reader that enjoys Fantasy written at the depth and quality of literary genre fiction, the search and the expenditure will yield a bountiful harvest.

Published by Thriftbooks.com User , 21 years ago
This is the first of the Lancer Books collection of Conan stories, which were edited for publication in 1966 by L. Sprague De Camp, a REH fan who had access to the estate of Howard's literary agent. De Camp 'completed' several Conan stories from outlines found after Howard's 1936 suicide. 2 of the stories included ("The Hall of the Dead" and "The Hand of Nergal") are 'completed' stories; they are fair pastiches of other REH adventures. Another 2 stories are by De Camp and fantasist Lin Carter ("The Thing in the Crypt" and "The City of Skulls".) I thought them pretty poor.The original Howard tales, however, are superb stories and amoung the best of the Conan cycle. They are:"The Tower of the Elephant", in which Conan follows a master thief into a mighty wizard's abode, and unleashes a supernatural revenge;"The God in the Bowl", in which Conan burgles a museum and uncovers a supernatural revenge; "Rogues in the House" is a clever combination of violence and intrigue as Conan is hired to assassinate a powerful priest;And first and least, "The Hyborian Age", Howard's introduction to his hero's period and environment.

The First book in the Greatest swords & sorcery saga written

Published by Thriftbooks.com User , 22 years ago
Robert E. Howard is truely the master of fantasy. This is the first installment of the conan saga. This book has the first eight short stories of Conans life written by Robert E. Howard and edited by L. Sprague De Camp and Lin Carter. These stories are fantastic well written swords & sorcery by the man who started the craze. The battles in the book are so vivid that you can feel the blood splashing your face as Conan cuts his enemy down. His emotions are so well written that you can feel Conans despair as he faces his greatest fears. Heck by the end of the book you miss the guy. This book has it all fights, drinks, booty, women, and high adventure. Conan was fun and entertaining to read I reccomend it to all swords & sorcery fans. If you like this book or are interested in more swords & sorcery then I reccomend these titles: the whole conan series, Brakk the Barbarian by John Jakes, Flashing Swords edited by Lin Carter(short stories), Swords and Deviltry by Fritz Leiber.

Published by Thriftbooks.com User , 23 years ago
After reading and analyzing five of Howard's Conan series, it is apparent that the author is a master of English prose. His word choice is amazing, his syntax is rich and diverse, his knowledge of rhetoric is comparable to any of the great story tellers of the past. In addition, his ability to plot and to create fascinating settings puts him in the forefront of imaginative authors. To a reader who wants to be entertained artfully, there is no better work or author to be found -- anywhere or anytime.

Conan, a runaway slave, is new to civilization

Published by Thriftbooks.com User , 23 years ago
Conan, a runaway slave, is new to civilization and has to turn to a life of crime. Ultimately, he becomes a pirate, a mercenary soldier in the various Hyborean kingdoms, and finally the king of Aquilonia, when he kills the depraved King Numedes. Conspirators plot to overthrow and kill him. He's taken prisoner twice and has to win back his throne from the usurper Valerius. On his wedding day, his bride's stolen by a Khitan wizard, and he searches the world for her. He tracks the wizard Thoth-Amon to his hideout in Sytgia, and defeats him. He visits Epimetreus the Sage for one last time and he tells him to abdicate in favor of his son, Prince Conn, and head out to stop the Red Shadows. That was his last adventure. Blair Colquhoun @cybertours.com
Copyright © 2020 Thriftbooks.com Terms of Use | Privacy Policy | Do Not Sell My Personal Information | Accessibility Statement
ThriftBooks® and the ThriftBooks® logo are registered trademarks of Thrift Books Global, LLC