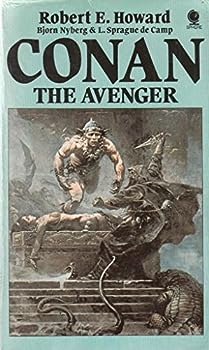 (Book #10 in the Conan - The Lancer/Ace Editions Series)

This description may be from another edition of this product. "Peace had reigned in Aquilonia, but when his beloved Queen Zenobia is stolen before his very eyes, Conan, the great barbarian king, cannot rest until he saves her. And so the most stupendous hero of...

Published by Thriftbooks.com User , 12 years ago
all the orignials and rewrites by sld are must haves and head and shoulders above the rest of the conan writers

Probably one of the best non-REH Conan stories

Published by Thriftbooks.com User , 18 years ago
There have been a lot of Conan tales written by a large number of different people. I can't say I've read them all (in fact I've stopped reading them) but I can say that of those I've read, this is one of the best, if not the best, of the Howard imitators.Nyberg manages to capture the energy of Howard's Conan tales, although he doesn't quite manage to produce the same atmosphere. The plot is pretty basic: bad guy captures Conan's wife, Conan sets out to save her. But Nyberg is so earnest and so obviously has a love for the characters that he manages to overcome any dificiencies in originality. A few facts about Nyberg and his book (and this is from memory so some of it may be slightly incorrect):Most people don't realize that Nyberg originally wrote this without any prompting from anyone, he was just a fan who felt compelled to add to the Conan mythos. I believe he originally entitled it "The Return of Conan," but the novel was later incorporated into the Lancer series (which was an attempt to collect and write a complete history of Conan in the sixties and seventies) as "Conan the Avenger."

Conan's bride, Zenobia, is kidnapped by a Khitan wizard

Published by Thriftbooks.com User , 23 years ago
Conan's bride, Zenobia, is kidnapped by a Khitan wizard and is taken to Khitai in order to be sacrificed. Conan follows him east. Meeting friend and foe alike. He rescues Zenobia and kills the wizard. Blair Colquhoun @cybertours.com
Copyright © 2020 Thriftbooks.com Terms of Use | Privacy Policy | Do Not Sell My Personal Information | Accessibility Statement
ThriftBooks® and the ThriftBooks® logo are registered trademarks of Thrift Books Global, LLC