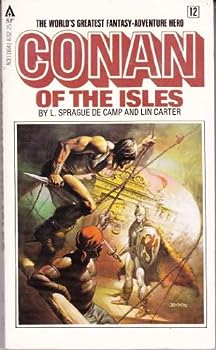 This description may be from another edition of this product. As the Red Terror, a bizarre, magical dark force whose victims disappear without a trace, descends upon Aquilonia, King Conan sets out to destroy its source, evil, conquest-hungry sorcerer-priests...

Published by Thriftbooks.com User , 13 years ago
Conan is goes on a Christopher Columbus type adventure, sailing off to Western shores and unknown danger. In that regard, it is a totally unique Conan experience. L. Sprague de Camp and Lin Carter can be very hit or miss in their stories. Often times they write as though they have no real understanding of the big Cimmerian, his language or gestures. They also lack the ability to make poetry out of the most abhorrent violence, the way Robert E. Howard did in his original works. But in this case, the authors managed keep me interested. Maybe it is solely because Conan is on such a unique adventure, or maybe this is just better writing than some of their other pastiches. In any case, this is worth reading as the final Conan adventure.

It fell apart in my hands

Published by Thriftbooks.com User , 18 years ago
No, not the story. The story was good. I'm talking about the book itself. It was so old that the glue holding it together dried out. I came late to the stories of Conan. That was in the early 1980s. 1982 if I'm not mistaken. It even inspired me to write my own stories about a barbarian of my own.In this book, Conan's 60. The ghost of his guardian angel,Epimeterius the Sage, comes to him in his sleep and tells him to abdicate in favor of his son, Prince Conn, who's Conan's heir. Conan writes the letter of abdication and setsout to fight the Red Terror, a magical plague that's spread across the world by the sorcerer priests of the remnants ofAtlantis. Conan fights them but we don't know if he wins or loses.

Published by Thriftbooks.com User , 21 years ago
Back in the mid-60's, when Lancer Books reissued the original Conan stories by Robert E. Howard, they enlisted the aid of L. Sprague DeCamp and Lin Carter to polish Howard's grammar, soften his more "politically incorrect" statements, and fill out the saga with pastiches. This, the last of the stories, is 100% pastiche, but it still has the flavor of Howard's barbarian. I first read it as a teenager, but now that I have passed the half century mark, the story has new resonance. In this adventure Conan anticipates George Foreman by several millenia. He may be old; he may not be the man he once was; but he can still outmuscle most foes, and those he can't outmuscle, he can outfox. At the conclusion of the book you might just get a little misty-eyed when Conan ends his adventure and sails off into the mists of time, never to be heard from again.

While not the best...

Published by Thriftbooks.com User , 21 years ago
The book starts extremely well with one of the best scenes ever written about Conan (The tavern scene). It's forever burned into my brain. Burn it into yours. The second half lags a bit but over all it's very entertaining. The Isles is an important book in the Conan series because it's the last Conan story. Conan shows that even at 60+ he's still got more than it takes. Great ending.
Copyright © 2020 Thriftbooks.com Terms of Use | Privacy Policy | Do Not Sell My Personal Information | Accessibility Statement
ThriftBooks® and the ThriftBooks® logo are registered trademarks of Thrift Books Global, LLC