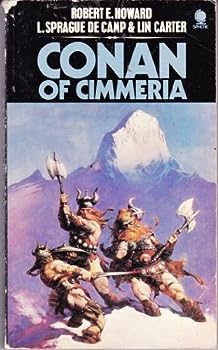 This description may be from another edition of this product. Contains: The Curse of the Monolith (de Camp & Carter) The Bloodstained God (Howard & de Camp) The Frost Giant's Daughter The Lair of the Ice Worm (de Camp & Carter) Queen of the Black Coast The Vale...

Published by Thriftbooks.com User , 13 years ago
This book has a supercharged, thrill ride ending. I mean wow, I can't believe they got that much story into so few pages, but that's what I love about the Conan short stories, they kick right off in the middle of the action, they catch you up quick, they glaze over a few details giving you just enough to let your imagination run wild, and then they came crashing to a dramatic end. These stories never limp to a conclusion, fast and furious all the way. "The Snout In The Dark" is best De Camp and Lin Carter completed Robert E. Howard Conan tale I have read to date. They took a nice intro written by Howard and fleshed it out into being the most dramatically ending Conan story ever, what a way to end a book. Not all of the De Camp and Carter stuff is worth reading, in fact sometimes it follows to closely to something Howard already did, but this one is a thrill ride all its own. "The Queen of The Black Coast" is a Howard classic and worth reading again and again. This story moves through so many emotions and themes, there's never a chance to get bored. The middle of the story could have easily been worked into a full length novel to cover the exploits of Conan and Belit, but this is one of the places you have to imagine it for yourself and just enjoy the dramatic, action filled final scenes. This one has an amazing photo finish, you can literally see the doom and gloom atmosphere of Conan's world. "The Vale of Lost Women" is a real nice example of the Lovecraft influence in Howard's work. This book has tons of supernatural forces from beyond the stars that man was not meant to encounter in it. Another nice thing about this story is that while Conan is there to get the ball rolling and to stop the ball from rolling, he disappears during the mainstay of the story and instead Howard concentrates upon the mysticism of the tale. "The Castle of Terror" is supernatural filler by De Camp and Carter that follows less dramatically along the lines of "The Vale of Lost Women" but it's still a fun read. "The Frost Giant's Daughter" gives you a picture of some of the gods of Conan's world and a picture of his intense emotions. The other three tales felt like filler to me, "The Curse of the Monolith," "The Blood-Stained God," and "The Lair of the Ice Worm," but they aren't bad reads when you aren't looking for much. In closing I love Howard Conan tales and this is a fun book and if you get it and you aren't enjoying it, just skip to the last story it just kills at the end, literally.

Published by Thriftbooks.com User , 13 years ago
Robert E. Howard a master story teller. you will find no great prose here but a story that will have you breathing harder and sweating as if you were there

Conan meets up with both Atali and Bêlit in his twenties

Published by Thriftbooks.com User , 16 years ago
Frank Frazetta's cover art for "Conan of Cimmeria" stands out from the works the artist did for the Lancer paperbacks that reprinted Robert E. Howard's Conan stories in the 1960s. This is because it was one of the rare times that Frazetta's art actually represented a story contained in the collection, in this case the best of the bunch, "The Frost Giant's Daughter." The stories in this volume 2 of the Conan paperbacks cover when the young barbarian was in his middle- and late-twenties. It consists of not only several Conan stories by Howard, but stories rewritten, revised, and created by L. Sprague de Camp and/or Lin Carter: "The Curse of the Monolith" by de Camp and Lin Carter, has Conan serving as a captain in the Turanian army and being sent by the generals of King Yildiz on a dangerous mission to Khitai. This is a good example of a story that fills in a gap and is nothing special. "The Bloodstained God" was originally written by Howard as a Kirby O'Donnell story, "The Trail of the Blood-Stained God," and set in modern Afghanistan, with de Camp rewriting it to make it a Conan tale. Conan has to desert from the Turanian army and he ends up looking for treasure in the Kezankian Mountains, along the eastern borders of Zamora. Another okay story filling a gap. "The Frost Giant's Daughter" was originally published in 1934 as "Gods of the North," and then revised by both Howard and alter de Camp. The story takes place after Conan returns home to Cimmeria and then joining the Aesir for a raid into Vanaheim where in the aftermath of a battle he meets a beautiful naked woman, who leads him into a trap involving her brothers. Along with "The Phoenix on the Sword," this was one of the first two Conan stories submitted by Howard, but it was the one that was rejected. Now it is a favorite Conan story with the virtue of being short and sweet. "The Lair of the Ice Worm" by de Camp and Carter has Conan returning to the civilized lands of the south trying to find someone who wants to hire his sword. This is probably my favorite of the pastiches in this collection mainly because I like the idea of ice worms. "Queen of the Black Coast" by Howard is the biggie in this one as Conan becomes the partner of Bêlit the she-pirate and gets the name Amra, the Lion. Conan is on a ship near the coast of Kush when Bêlit attacks and kills the rest of the crew. Of course, she falls for the Cimmerian. Howard is trying for something big here, but since he ends with a short story instead of a novella or another novel like "The Hour of the Dragon," it is over much to quickly. No wonder Roy Thomas and John Buscema took several years in their "Conan the Barbarian" comic book to flesh out this one, because this one is not as good as it should be. "The Vale of Lost Women" by Howard, like "The Frost Giant's Daughter," is a Conan story that was not published during the author's lifetime. Conan saves Livia, a civilized white woman, who has been taken prisoner by t

People Are Way Too Harsh on De Camp & Carter

Published by Thriftbooks.com User , 20 years ago
This is less of a review of this particular volume in the Conan opus as edited & added to by L. Sprague de Camp and Lin Carter than it is a response to the thrashing that the abovementioned writers have been taking in this forum and in many others. It's true that no one can write Conan the way Robert E. Howard could. I'm not convinced anyone has ever really tried. Some of the work de Camp & Carter did with Howard's material is cheesy. Remember - most of their pastiches were written to fill gaps in the timeline. Many of them were written from Howard fragments. It's also true that Karl Edward Wagner did a much better job presenting Howard's writing when he was manning the Conan fort. Wagner's Conan books are now quite expensive and pretty hard to get a hold of. My own introduction to Conan came in the 1980's, through a combination of Marvel Comics and the Ace reprints of the de Camp & Carter editions of the old Lancer paperbacks. Had it not been for the work of de Camp and Carter I might NEVER have discovered any of the works of Robert E. Howard. For that, I am - and I suspect that a lot of readers my age should be - eternally grateful to them. As to CONAN OF CIMMERIA, this is one of the best of the de Camp & Carter editions. The pastiche pieces are readable and the pure Howard is mostly unadulterated. "Queen of the Black Coast" is one of Howard's finest stories. Highly recommended.

Published by Thriftbooks.com User , 20 years ago
To be honest, I didn't bother reading the de Camp and Lin Carter stories. Why? They're pastiche authors. And no one can write Conan like its creator, Robert E. Howard. Even Robert Jordan's Conan stories were dirt compared to Robert E. Howard's. To me, pastiche authors are the scum of the earth because they are so low that they have to continue someone elses creation just to make a living--can't they be original. Sure, de Camp has written other stuff, but most people would associate him with Conan. When the Conan movie came out in the 80's, I thought that de Camp was the creator of Conan. Boy was I wrong! As far as the book goes, the three Robert E. Howard stories inside are good, but not Howard's best. I thought that the Frost-Giant's Daughter was the best of the three. But I think that Howard's best short story was A Witch Shall Be Born. Looking at the book as a whole, it's only worth about 2 or 3 stars, but you can blame de Camp and Carter for dragging the rating down.
Copyright © 2020 Thriftbooks.com Terms of Use | Privacy Policy | Do Not Sell My Personal Information | Accessibility Statement
ThriftBooks® and the ThriftBooks® logo are registered trademarks of Thrift Books Global, LLC