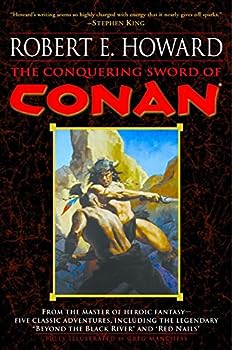 The Conquering Sword of Conan (Conan of Cimmeria, Book 3)

(Book #3 in the Conan the Cimmerian Series)

This description may be from another edition of this product. "For headling, nonstop adventure and for vivid, even florid, scenery, no one even comes close to Howard."--Harry Turtledove In a meteoric career that covered only a dozen years, Robert E. Howard...

Published by Thriftbooks.com User , 13 years ago
A great read for any true Conan fan. Robert E. Howard's finest works are collected in this third of his fabled Conan books. Collect them all.

Published by Thriftbooks.com User , 14 years ago
The Servants of Bit-Yakin- In exemplary Wierd Tales Robert E. style, this one starts with Conan almost inexplicably scaling the side wall of an ancient city in a place we've never heard of. The barbarian has come to this place through information gleaned on adventures that Robert never told us about, as though the author had some Hyborean Silmarillion stashed somewhere that the recyclers have never found. It's an excellent story that may have equal claim to several genres; horror, fantasy, sword and sorcery, and maybe even prehistoric fiction. Howard had an uncanny knowledge of those days when ice age species still survived in remote places, and had incredible insight into theorizing what it must have been like in the days when civilization vied with barbarism. What's interesting to me is that we're finding out these days that civilization is alot older than we think, but in Howard's day anything older than 3000 BC was considered prehistoric. Conan's era was around 9000 BC, with embellishments from many other eras in different places where civilization was replacing barbarism. Certainly, we now know, there would have been ancient deserted structures at this time, maybe even with remnants of antedeluvian archaic homo sapien living therein. Certainly Jericho had walls before Conan's time, and both cro-magnon and the southeast asian hominid dubbed "the hobbit" lived at least up until 10,000 BC. But how did Howard know it? How did his imagination describe so vividly and personally how life must have been in those brutal and barbaric times? Beyond The Black River- WOW! This is probably Howard's most memorable Conan tale, told from the perspective of a hardy and valiant but lesser man who's lot in life is to travel and fight with Conan for a spell. Through this frontiersman's eyes, we understand Conan as a character perhaps better than we ever have before. The illustration of the Balthas's last charge, dog at side, flashes in my mind when I think of this tale. "He was a man," said Conan "I drink to his shade, and to the shade of the dog, who knew no fear." The Black Stranger is a pirate tale and frontier yarn that is among Howard's most developed plot structures, characterization, and writing skill. The Man-Eaters of Zamboula melds fantasy and horror like only Robert E. can, a wicked tale of treachery and ancient necromancy. Red Nails is definitely one of the greatest of the Conan stories. Again Howard shows uncanny preternatural knowledge, with an ancient city very much like some of the stranger ones excavated in the middle east, and a realistic dragon more like Megalania Prisca than Saphira and her influences. In the appendix, Wolves Beyond the Border is a special rare treat. Enjoy and enjoy again the genious of Robert E! J. Lyon Layden The Other Side of Yore

Published by Thriftbooks.com User , 14 years ago
I have been reading the works of Robert E. Howard for half a century and in all that time never has his prose failed to amaze me in it's richness, its intensity, and it's unfailing ability to take me from the world around me to the worlds that Howard created with such unfailing verve and passion. In this series of books we at last can read Howard unpolluted by the editorial persversion of those who wished to make a better time frame for the stories, or who thought the readers of heroic fantasy were not capable of ignoring such inanities as a misspelled word, or a small glitch in the temporal continuity of a characters life, or a kingdoms identity. I won't bore the reader here with a rehashing of Howard's brief but prodigiously creative life. Nor will I rave about the fact the he single handedly created a whole genre. I will simply say, as an author, as an artist, as an image maker, I have yet in my now long life and as an officianado of the so called sword and sorcery genre, ever seen his equal. Not Burroughs, nor Kline nor Leiber, not Bradbury, nor any other author that I have discovered in my unending search for great fantasy reading materials has ever created prose that with such pure and unimpeded energy throws the reader into a fictional environ so alive with the sights, sounds, smells and the beingness of worlds that existed in one mind. Howard's unique ability to put you into his worlds always raises the unanswerable question; if he had lived to a more mature age, would he have grown and expanded his incredible gift to write works of greater depth and meaning? Well, that question will only be answered when all of us who live on this plane, and those worthy of it, meet Howard on the Eylisian fields, amongst the other mighty warriors who did walk this world. I have no doubt that if the gods are just, that somewhere in that realm across the river styx there lives a warrior who once wote those tales, and who now, with all those other warriors who conquered and created empires, fights battles each day, and with the coming dawn, all those who were slain on that field the day before awake to grog and a linsome lass to prepare them to fight that glorious and unending contest once again. There I think you will find him, forever what he was, a warrior, filled with a lust for life and adventure. Look to the front of the lines and there you will find him with sword and buckler hewing and roaring his joy of life.

Published by Thriftbooks.com User , 14 years ago
After years of execrable garbage foisted on us by L Sprague de Camp, Lin Carter, and others (though some of the pastiches by other authors than these are decent), we finally get Conan as R. E. Howard envisioned him. Lacking the softer, milder imitation work of the aforementioned writers, this final volume in Wandering Star/Del Rey's reverent reissue of Howard's original work is a brilliant tour de force. All of the stories here range from passable (Servants of Bit-Yakin, Man-eaters of Zamboula) to great (Beyond the Black River, The Black Stranger) to outstanding (Red Nails, of course). Red Nails--the last story Howard wrote about Conan--is my favorite of them all. In the story, Conan is lustful of the voluptuous Valeria but adherent enough to a code of honor not to force himself on her. (Yes, she does finally give in to his advances.) More than the brilliant interpersonal relationship between the two leads though is the theme of death and decay surrounding the city of Xuchotl (an obvious stand-in for Howard's own home in the year before his untimely death). Both Conan and Valeria come to vivid life on page and drag the reader into Howard's fictional universe by sheer force of will. Howard's writing is full-throttle all the way to the bloody (and surprising) climax. What a way for the Dark Barbarian to exit the stage! As for the other stories, they all have their merits as much as Red Nails, some more so than others. What shines through each though is Howard's clear writing and dark, visceral vision of his savage world. Coupled with all this are drafts of some of the stories, an outline of the history of the writing of the Hyborian Age tales, and the letter Howard wrote to fans Miller and Clark detailing some previously unknown things about Conan. While Howard probably would never have written about Conan again even had he lived, what we have from him is brilliant and worth reading over and over. Thanks to Howard and his publishers for bringing the iconic Barbarian to life for us.

Published by Thriftbooks.com User , 15 years ago
The Conquering Sword of Conan is the third and final volume in the Wandering Star/Del Rey collection of Howard's complete "Conan of Cimmeria". For fans of Robert E. Howard, this is a major achievement, because its the first time all of the Howard Conan stories have been published in the order that they were written, completely uncensored and pastiche free. Now, we are able to get a much more accurate look at the both the evolution of the character, as well as Howard's skill as a writer. In the Lancer/Ace editions, the stories were placed in chronological order and peppered with dreadful pastiches. The problem with this is that it was never Howard's intention for his stories to be read that way. The Conan saga is not a unified Joseph Campbell style hero's journey such as "Star Wars" or "Lord of the Rings". Rather, it's more akin to James Bond. Each story can be read and enjoyed on its own, without any prior knowledge of the events or characters in previous stories. In fact, in no Conan story are the plot details of any other Conan story ever even mentioned, except in the most general of terms (Conan gives a brief overview of his career in "Red Nails"). This was by nature, a matter of necessity, as these "pulp fiction" stories were geared towards the casual magazine reader who might be picking up a copy of "Weird Tales" for the first time. Of the five stories in this volume, three of them are considered by fans and literary scholars to be among the best work that Howard ever produced. They are "Beyond the Black River", "The Black Stranger, and "Red Nails". Beyond the Black River: this is generally considered Howard's finest work, transcending the level of pulp fiction and worthy of serious critical analyses. Even if viewed as a simple adventure story, it's unbelievably exciting and entertaining. In order for this story to fit into the genre that he invented, which would later be known as "Sword and Sorcery", Howard populates it with the traditional elements, such as an evil sorceror and supernatural monsters. However, these elements are downplayed. This is the most realistic and true to life Conan story that Howard wrote. Its basically an American frontier saga transported to the Hyborian age. The Picts in "Beyond the Black River" bear little of no resemblance to the Picts of Bran Mak Morn or King Kull's time. Here, they serve as thinly vealed stand-ins for native Americans. The story also contains Howard's most famous quote: "Barbarism is the natural state of mankind. Civilization is unnatural. It is a whim of circumstance. And barbarism must always ultimately triumph". To those who have never read Howard, who think of Conan as a sort of monosyllabic Tarzan on steroids, I urge you to read the aforementioned story. You'll never see Conan the same way again. The Black Stranger: what's really amazing about this story is that this is the first time most of us have ever read it in its original form. In the Lancer/Ace edition
Copyright © 2020 Thriftbooks.com Terms of Use | Privacy Policy | Do Not Sell My Personal Information | Accessibility Statement
ThriftBooks® and the ThriftBooks® logo are registered trademarks of Thrift Books Global, LLC