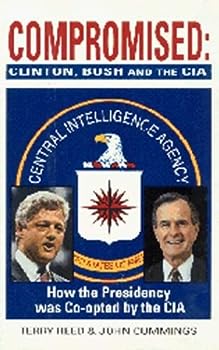 Compromised: Clinton, Bush and the CIA

by John Cummings and Terry Reed

The first documented expose of Bill Clinton's involvement in illegal government activity includes alleged evidence that George Bush was lying when he said he was out of the loop regarding Iran-Contra activities. Photos. Satellite TV tour (20 cities).

We receive 30 copies every 6 months.

A great book inspite of:

Published by Thriftbooks.com User , 15 years ago
A great book but about 200 too many pages and horrible typography. I have first hand knowledge of many events described and they are acurate. A must read even though a hard read. This book should be read by every US citizen. However, it will be read by too few, because of the way the book was produced. I suspect that the book was sabotaged by agent/s provocateur at the production level. This only proves just how bad our "elite" don't want us to know the truth. Learn the truth in spite of them!

Tom Clancy for real...and it's scary.

Published by Thriftbooks.com User , 19 years ago
If you like Tom Clancy, here's the real deal. A former Air Force intelligence officer turned manufacturing engineer, pilot, and independent business man is recruited by the CIA (Oliver North) to assist in the training of Contra pilots in Mena, Arkansas. His name is Terry Reed, and does he have an incredible story to tell! This American patriot reveals everything after the CIA tried to screw him after Iran-contra. Plenty of very interesting information about Clinton, Bush, the Arkansas elite, covert CIA operations, CIA super-agent Barry Seal, money laundering, international narcotics trafficking, and CIA influence in the US political system.

Published by Thriftbooks.com User , 19 years ago
As I read this work, it became so compelling that I couldn'twait to wake up to read more. I found myself yelling at Terryand his wife throughout the book - "No, don't do that!" Knowingnot exactly what was waiting for them in the future - but knowingit wasn't going to be good.What was amazing was how they "played his ego", "played hisambition" and generally opted out when questions that made sensewere asked. Who is ever to know if any or all of this storyis or was true. What is important is: It makes too much sense!The methodology and policies Mr. Reed explains about the Agencyis terrific. Especially, the Barry Seal flights - which tendsto explain a lot of other "so called" mysterious plane crashesaround the world.Compromised has changed my life, because it not only broughtlots of new information, but confirmed all my worst fears!

Published by Thriftbooks.com User , 20 years ago
I read this book twice when it was first published. The deals described in this book anticipate many events, such as the political elevation of George H. Bush's sons (yes, I voted for George W. Bush)and the protection enjoyed by Clinton during his presidency. Terry Reed is an American hero with the guts to reveal the truth.

Published by Thriftbooks.com User , 22 years ago
I found this book to answer the mystery of the Iran-Contra/Mena, Arkansas drug smuggling operation. Having read "Under Fire" by Oliver North and this book I find it quite obvious who's lying. Terry Reed, a CIA operative, who thought he was serving an honest government, is compelled to expose the corruption that he himself encountered. Whereas, Oliver North in his book COVERS it all up. We should be thankful for Terry Reed's courage to bring this information out. This book corroborates the documentary, "Mena Cover-up". A man who follows his conscience should never be bound to secrecy when that secrecy only hides corruption. May more COURAGEOUS men and women who have vowed "to secrecy" STAND up!
Copyright © 2020 Thriftbooks.com Terms of Use | Privacy Policy | Do Not Sell My Personal Information | Accessibility Statement
ThriftBooks® and the ThriftBooks® logo are registered trademarks of Thrift Books Global, LLC