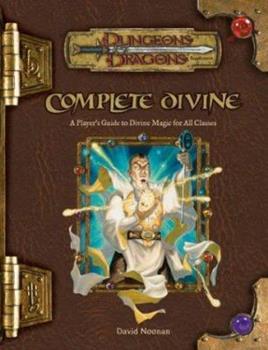 The most detailed resource ever released on accessing divine power and divine favor in the D&D world. Complete Divine provides Dungeons & Dragonsreg; players with an in-depth look at how to gain the favor of the gods and use that power to a character's advantage. There is a rundown of new gods in the D&D pantheon, in addition to new feats, spells, prestige classes, and magic items. In addition, this title adds new and revised base classes to a player's...

Published by Thriftbooks.com User , 15 years ago
Me, the guy who always plays the Cleric or Druid, could'nt resist picking this up, and it was worth every penny. Lets start with the beginning: Chapter 1: The Favored Soul, Shunenja, and Spirit Shaman are all nice classes, though I have to say I'll probably only use the first two. Chapter 2: The best part in my opinion. Every type of Divine spellcaster, and even some arcane spellcasters, has a class here. My favorites are the Pious Templar, Warpriest, and Divine Oracle (all of whitch I hope to become in the near future.) Chapter 3: The feats of the book where pretty good, but I'll probably only use the Wild Feats, whitch are mostly variations of other feats but with lower prequisites. Some of the divine feats are nice, like Spontanous Healer/Inflict/summoner if your not the apropriate class. It also touched on Epic Divine spellcasters, but all the feats are in Epic Level Handbook, but its good if you dont have it. Chapter 4: The Relics where a nice touch to the book, and although its exclusive to the core Greyhawk Dieties, It gave me some ideas on artifacts for my campiagn, as well as that of my freind's. Chapter 5: This chapter gives a synopsis of the rites, worship, temples, and practices of the core dieties as well as others, such as Bahamut and Lolth. It also touches on other minor Greyhawk deities. Chapter 6: The descriptions of what happens after death in these chapters has silenced many arguements at the table, such as intricacy's in resurrection and how the soul reacts to its new home (Or old one if its devoted to Fharlangh or Vecna. It also decribes Religous groups, though I knew all this stuff already. Chapter 7: 5 pages of new domains. If thats not enough, alot of new Cleric and Druid spells (As well as Blackguard, Ranger, And Paladin, though not nearly as many of them.) Though most are useful to me, some I'll never even think of agian. But there are always those spells that seem as if they were put there to address something that almost never comes up. I really like this book, and it ranks with my top 5 most used/useful supplements at #4. I use this book whenever I'm making a Cleric, Paladin, Blackguard, or Druid. If your Pcs don't play these (Why?) then consider other books, but otherwise, read this and I believe you'll find something to make you Diviner's the best they can be.

Every Party Needs One

Published by Thriftbooks.com User , 15 years ago
The Cleric (or Druid for the very brave) is the literal life-house of the adventuring party...that fact alone warrants the purchase of "Complete Divine". The classes presented are small (only 3) and only one of those, the Favored Soul (A Divine magic version of a Sorcerer) is likely to see much use outside of a Far-East campaign setting. Prestige classes make up for the lackluster base classes with 24 prestige classes of various roletypes. These roles range from the battle ready Warpriest (supernatural abilities to cure allies in a radius and other combat-centric buffs) to the combat-prevention Evangelist (perfect for the Bard with a spiritual side). Many of these prestige classes are not so one sided that only clerics gain benefits. In fact nearly every single class has some choice for a prestigious taste of divine magic (including special cases for Monks and Paladins that allow them to continue gaining Monk or Paladin levels after taking the prestige class) The feats included in this book are likewise useful, especially the ones that follow the form "Exchange one turn undead attempt in order to..." This gives one of the often overlooked abilities of the cleric a chance to shine once again, especially in campaigns with few undead. The "Relics" section contains items specific for followers of each major Deity in the basic cosmology of the Player's Handbook, but they are best used more as quest items than potential equipment, as many players who aren't clerics or paladins don't bother with choosing a deity, making the number of (fully) usuable items very slim for most parties. The next 2 chapters cover different aspects of the gods of D

Published by Thriftbooks.com User , 16 years ago
I almost didn't purchase this volume of the complete series, but the completist in me egged me on. I have to say, I am SO glad I did. The classes presented I found to be so-so. I'm not a big divine player, so my opinion is essentially skewed. I'll leave the review of this section to the experts. The Prestige classes here are what makes this book shine! The Evangelist is an awesome progression for any cleric. I am absolutely in love with the idea of a Pious Templar as an NPC in my campaign. There are so many great PRCs here, I could go on and on. The feats, what can I say, wow! Every dedicated healer should pick the Augment Healing feat, such a great feat! You also have to love the Spontaneous healer feat as well, giving you the ability to drop your spells for healing spells. Again, I can't say more about the feats presented here! The only sections I took issue with is the Dieties section and the Divine World sections. For those of you running Greyhawk or another published CS this section is indespensible, however a lot of people create their own pantheons and religions. Personally, I can see how the sections could be useful, I just didn't find a use for them in my homebrew campaign setting. And the spells, wow! I love the options given to the Druid, a oft overlooked class in my opinion. The extra domains really impress me as well. They really feel natural in their design, I was quite impressed. All in all I would say this is a must have for any DND library.

Published by Thriftbooks.com User , 16 years ago
I am something of a completist and have most of the WOTC books published in the last 3 or 4 years, that said I think there are far worse 3.5e books that they have put out other than this.Complete divine along with the others in this series are some of my favourites and see more use than most. The base classes were not extraordinary although I must be in the minority as a fan of the favoured soul (love the spontaneous casters), nevertheless there is a ton of useful information here in new and updated prestige classes, spells, items etc.And as a 30 something gamer who was raised in greyhawk I absolutely loved the deity entries :) ...now if they would just bring back spelljammer...

A new level of cleric

Published by Thriftbooks.com User , 17 years ago
I realise that many peole here have collected every DnD supplement since they were able to put it on their christmas list. I haven't. I played first edition and 3.5 (with a large absence due to college career choices). When asked what super power I wanted most, I thought healing would be super cool. The traditional cleric, although beign able to heal, was a nothing character who walked around with a club like an ape. A spell caster with limited and unfocased abliities, except for healing... which I guess is fine. The complete divine is absolutely necessary for anyone wishing to play a cleric class. With the expanded domains I've seen from this text I've seen convincing clerics of evil, druid/clerics (without the multiclassing.. just take a peak), clerics of retribution, clerics of psyc/telepathy.. just wild. This may have saved the class from absolutely being uninteresting. Wizards, druids, sorcerors.. all have new spells over the last couple of years to make them more interesting. Clerics started to be uninteresting. Play a cleric with the new spells and domains in this book and you may have a great time. Also don't forget to look at the feat list in this book... want to turn your rebuke undead into maximizing your healing or smiting... oh yes you can. Finially want to heal your friends and be evil.. you can. Want to be a spontaneous summoner with the powers of the elements to match your druid ally for a campaign to overthrow the lord or whatever who is making undead tree ents, have at it. Do you need more turning because your DM is doing an all out cleric campaign.. you can. You can acutally run an interesting campaign with all clerics and not have undead. Just too fun. Difficulty with some of the mistakes isn't so bad, but it can take a few minutes with the DM to establish better boundaries.. but that's not been that difficult. A revision fixing some of the mistakes would be nice... As noticed this reviewer plays clerics most and not many of the other divine in this book. For clerics this book is a necessity... for others, ask those who play the class (some druid reviewers didn't like this book). I've played with it for the last few months and still have it open pretty often because I'm evil this month or whatever (also rec. the book of vile darkness if your are playing an evil cleric or batteling one IMO, the book of undead is only ok for characters.. nice monsters). Anyone who wants to raise an army out of "friends" that are being slautered while covering someone in boils and rendering them useless while you drain their friends... have at it. The makings of some fantastic good and some deliciously evil players.
Trustpilot
Copyright © 2022 Thriftbooks.com Terms of Use | Privacy Policy | Do Not Sell My Personal Information | Accessibility Statement
ThriftBooks® and the ThriftBooks® logo are registered trademarks of Thrift Books Global, LLC