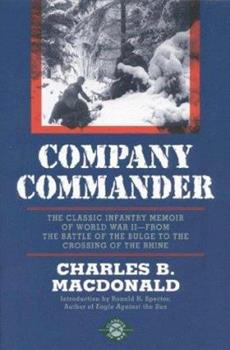 by Charles B. MacDonald

As a newly commisioned Captain of a veteran Army regiment, MacDonald's first combat was war at its most hellish--the Battle of the Bulge. In this plain-spoken but eloquent narrative, we live each minute at MacDonald's side, sharing in all of combat's misery, terror, and drama. How this green commander gains his men's loyalty in the snows of war-torn Europe is one of the great, true, unforgettable war stories of all time.

Published by Thriftbooks.com User , 17 years ago
This book is probably the finest memoir of any junior officer in WW2. Unlike so many war memoirs, MacDonald keeps his focus firmly on his own experiences, and doesn't waste his readers time by speculating on `the big picture' or describing incidents which he didn't personally take part in. He sticks to what life was like for a junior officer in command of an infantry company - disorientating, stressful and very dangerous. On the strength of this book MacDonald was selected to work on the famous Official History of the US Army in World War Two, and produced two of the best regarded volumes in that definitive series.

Published by Thriftbooks.com User , 20 years ago
Captain Charles B. MacDonald first commanded I Company, 3-23rd IN, 2nd ID from October 1944 to January 1945 and later G Company, 2-23rd IN from March to May 1945. This memoir was written a few years after the war when recollections were still sharp and resulted in a very detailed account of what it was like to take command of a line infantry company and lead it into battle. This book is a must-read for all army officers who seek to command at company-level and it is also informative for military historians as well. In comparison to the more recent Band of Brothers, ostensibly a company-level account of E Company, 506th PIR's actions during the same period, Charles MacDonald's book is clearly superior. In fact, Company Commander is everything Band of Brothers is not: accurate, objective and informative. Unlike BOB, MacDonald does not claim that the companies he commanded were anything special or that he demonstrated heroic leadership (he did win the silver star in the Battle of the Bulge). Instead, the author is very honest, admitting his apprehension and anxiety about commanding infantry on the front line. Although there is some tension with battalion and regimental headquarters, mostly about ill-considered orders and creature comforts, there is not the character assassination that is so prevalent in BOB; Macdonald was career army and he wasn't going to make points by ridiculing superiors. MacDonald arrived as a replacement and took command of I Company just as the unit was conducting a relief-in-place of another US unit in some captured positions in the Siegfried Line in the Ardennes. While civilian readers may find the first 100 pages devoted to this "quiet time" to be dull, military readers will not. MacDonald does a superb job describing the nuts-and-bolts of a relief-in-place in a difficult position that is under enemy observation and then the daily grind to improve the position. Readers who believe that US units in the Ardennes in the fall of 1944 had it easy should reconsider. MacDonald's unit was under constant mortar and sniper fire, poor weather caused much sickness among the troops and supplies were limited. On 17 December 1944, MacDonald's battalion was hastily shifted to blunt the massive German Ardennes offensive but the 12th SS Panzer Division overran his company. Fortunately, losses in MacDonald's company were relatively light and when the unit was reformed it helped to stop the northern German pincer on the Elsenborn Ridge. In January 1945, the author was wounded while participating in the counterattack to retake St. Vith and spent two months recovering. Returning to the 23rd Infantry in March 1945, MacDonald was given G Company and he led this unit in the final dash across Germany to Leipzig. MacDonald ended the war in Czechoslovakia. The final three weeks of the war seem a bit blurry here, compared to the earlier slow pace in the defense, and this is the only aspect of the author's narrative which is a bit choppy. T

Published by Thriftbooks.com User , 21 years ago
Before I even start with my opinion...if you don't have this book and you have even the smallest WW2 library than stop right here and pick it up. It is the WW2 Infantry memoir Classic written by a guy who was destined to become the Official Historian of the Army. Macdonald doesn't say anything about his career after the war in this book, nor does he spend half the book talking about his training. He dives right into the War and spends every drop of ink trying to describe what the experience was like. His account of the outpost over the Siegfried and his companies' part in the Bulge are terrifying and ferocious. His position at the head of a company afforded him with the luxury of realizing the big picture while still having contact with the front lines. In fact he had such close contact that he was awarded the Purple Heart for a bullet in the leg during a patrol in the Bulge. There are many interesting stories and a lot of action, my personal favorite part of war memoirs. Get familiar with the part of the 2nd Division though for there are no maps:(... But despite that it is an excellent book...and a requirement for every WW2 library!

This is a riveting account of my Father's WW2 experience .

Published by Thriftbooks.com User , 23 years ago
On the day of my Father's funeral last month , a long-time friend of his gave me this book and explained that it was about my Father's WW2 experience .My Dad was a very gentle man , and a pillar of our community . He never mentioned the awful details of what he had gone through . When he spoke of the war , he would recall certain events that were not too awful . My siblings and I grew up with a healthy respect for the truth he spoke , that "WAR is Hell " , that it was "Tough" . I can see his contorted expression as he emphasised these words . Now I know the "real" story . My Dad was the First Lieutenant directing 81MM mortar fire , as described on page 301 . His real name was Ernest S. Compton Jr. of Greenwood , SC . As a 1942 graduate of Clemson Military College , he was also a "green" Officer in The 23rd Infantry . After VE Day , he was an Assistant to The Train Commander , Captain Macdonald , that brought the men home . This book is extremely accurate and matches my Father's records and photographs . My everlasting gratitude and respect go to these Combat Infantry-men that answered the call . I highly reccomend this book to children of WW2 Veterans or anyone else interested in the day-to-day activities of "The Footsloggers"

One of the best 1st person descriptions of the Bulge

Published by Thriftbooks.com User , 23 years ago
Charles MacDonald's "Company Commander" is one of the classic books of WW2. MacDonald's wartime memoirs were originally published in 1949, so his recollections were still fresh, and it does read better than most of the WW2 vet's stories written 30, 40 or more years after the fact.MacDonald was a 19 year old OCS graduate Captain when he took over a Infantry company in the 2nd Infantry Division. This was a veteran formation in Sept '44, it's not hard to imagine the difficulties faced by a green 19 or 20 year-old CO. MacDonald doesn't cut himself or those he leads slack, however and he honestly describes his accomplishments and screw-ups. By October his unit is poised on the Seigfried line and participates in the attempts to seize the Roer river damns. This is where he is when Hitler's Ardennes offensive breaks out, for me this was the heart of the book. You read in crushing detail as his command is smashed, steamrolled by German Panthers and panzergrenadiers outside Krinkelt-Rocherath. (Go to those towns in Belgium today and you will find a sad line of foxholes where MacDonald describes them-made all the more sad by knowing what took place there.) MacDonald describes the fighting retreats and pitched battles well-a WW2 company commander was never far from the front. He was eventually wounded, and after recovery commanded a different company in the 2nd ID. The 2nd half of the book details the Spring offensives and eventual destruction of the Reich. There are some great combat descriptions there also such as when his company takes a battery of German quad 20mm guns. This book is often described as a company commander's textbook, it may be that, but don't run away because you aren't a CO or planning on being one, this is, primarily in my book, excelent 1st person history. I can't believe this is out of print, don't know how much longer my Bantam "Combat Series" paperback will hold up...
Trustpilot
Copyright © 2022 Thriftbooks.com Terms of Use | Privacy Policy | Do Not Sell My Personal Information | Accessibility Statement
ThriftBooks® and the ThriftBooks® logo are registered trademarks of Thrift Books Global, LLC