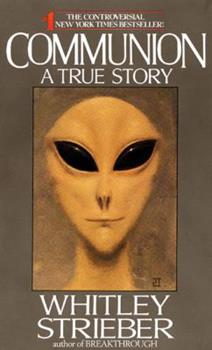 (Book #1 in the Communion Series)

On December 26, 1985, at a secluded cabin in upstate New York, Whitley Strieber went siding with his wife and son, ate Christmas dinner leftovers, and went to bed early. Six hours later, he found himself suddenly awake...and forever changed. Thus begins the most astonishing true-life odyssey ever recorded -- one man's riveting account of his extraordinary experiences with visitors from"elsewhere"... how they found him, where they took him, what they...

Published by Marie-Josee B , 3 days ago
After reading references about his book in another “Alien true story” I was curious and bought it. I was not even done reading it, that I ordered all the other books that precedes this one… His experiences and theories only strengthened what i always knew deep in the back of my soul. Thank you for sharing your incredible journey M. Strieber!

So far this is a gem

Published by ALICIA , 2 years ago
A great addition everyone should have in their library

Published by Thriftbooks.com User , 5 years ago
Best well written alien abduction book I have ever read. Not scary to me. I whizzed right through it. Page turner for me. I was 28 years back then in 1988. I would love to read it again. I believe Whitley actually experienced all he wrote about.

The most frightening book I have ever read!

Published by Thriftbooks.com User , 18 years ago
I actually read this book when I was 13. I have been an avid reader since I was very young and at that time I was experimenting with new books. Boy, did I get the surprise of my life! This book scared me so much I remember sleeping with the lights on for months. I still get the shivers when I see the cover. The second book, "Confirmation", was a huge disappointment, but this book was so believable and even if you think Mr. Strieber is a nut it still makes you think...

Published by Thriftbooks.com User , 19 years ago
This book is a true classic among the hundreds of alien abduction books out there. Whitley Strieber writes with sincerity on his feelings and thoughts about his abduction experience, and to the reader he'll come down as just an average human being who had this extraordinary experience. I've read many alien abduction books since, and still feel "Communion" is the best.As the other reviewers mentioned, it is a chilling story. Yes, I also suffered from nightmares after reading it. Strieber was already known for his other books before "Communion" ("The Hunger", "Wolfen", etc.) Interestingly, Strieber claims that his horror novels were based on his subconscious fears caused by his lifelong abductions, unbeknownst to him when he wrote the novels. Because it is so well written, I think even skeptics would find it at least entertaining if not enlightening. Without a doubt, it's one of the scariest books I've ever read.Readers of "Communion" might also find "Report on Communion" by Ed Conroy also interesting. I also recommend any book by Budd Hopkins, or "The Andreasson Affair" series by Raymond Fowler.

Best Book on the Subject

Published by Thriftbooks.com User , 22 years ago
Whitley Strieber broke new ground with Communion, capturing the nation's attention and forcing serious consideration of that which is improbable or impossible, depending on your viewpoint: alien abduction.Whitley, an up-and-coming novelist with a promising future, risked all by courageously revealing his belief that he has been an "abductee" for most of his life, repeatedly taken, examined, and manipulated by aliens of unknown origin, for incomprehensible reasons that he later attempts to explain in subsequent books. Financially, the book was a success, but he has paid a price, labeled a kook and ridiculed in interview after interview.The power of this wonderfully written book is proven by more than its popular appeal. It initiated a coming-out of other abductees, which continued to the point of becoming a fad, and then a joke, similar to the contemporary psychiatric phenomenon of claiming one was abused by Satan worshipers as a youth. This is sad because--whatever the cause--there is a group of people to whom these events are very real. Whitley convinces the reader that he is one of these. With expressive style and absolute control of the English language, he allows us to witness the terror he is forced to deal with.Whether or not you believe what happens to Whitley is caused by aliens from outer space, creatures from the center of the earth, bad dreams, or a creative imagination, the book is extraordinarily well done and worth reading. --Christopher Bonn Jonnes, author of Wake Up Dead.

Quite a ride, fact or fiction.

Published by Thriftbooks.com User , 23 years ago
You can believe him, or you can think he's crazy. But after reading this book, you will believe that Strieber firmly believes in what he's saying.Once in a great while, a book comes along that changes the way one perceives reality. For me, and I venture to say many others, Communion is such a book.I don't know if Strieber's "visitors" are real physical beings, multidimensional travelers, creations of the human mind, or none of these things. Neither does he. But some of the things Strieber describes in Communion have been experienced by far too many people, to be pure fantasy. There is SOMETHING very strange going on, be it alien abduction or widespread shared dreams. Either way, the subject deserves serious investigation.Read this book. If you come away believing it, you'll be a changed person. If you come away believing it's fiction, you'll have read one hell of a story.
Trustpilot
Copyright © 2022 Thriftbooks.com Terms of Use | Privacy Policy | Do Not Sell My Personal Information | Cookie Preferences | Accessibility Statement
ThriftBooks® and the ThriftBooks® logo are registered trademarks of Thrift Books Global, LLC