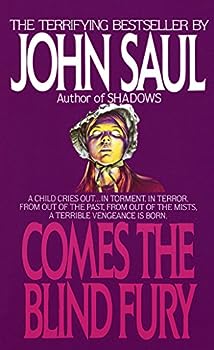 Comes the Blind Fury: A Novel

This description may be from another edition of this product. A century ago, a gentle blind girl walked the cliffs of Paradise Point. Then the children came -- taunting, teasing -- until she lost her footing and fell, shrieking her rage to the drowning sea......

Published by Thriftbooks.com User , 16 years ago
Oh, goodness,one of the best books I've ever read. People say it doesn't make sense but think about it! After she falls off the bluff running away from the mocking children on the beach her life takes a giant leap for the worse.Amanda ,the ghost, uses Michelle to see what she wants and Michelle is blamed for everyone she killed. I felt so bad for Michelle and angry towards her father who practically dis-owned her because of what had happened in the past. her new sister didn't help Michelle feel anymore important either.It was so sad that it actually made me cry.I was really disappointed with the ending but the whole book in general was fantastic!

Published by Thriftbooks.com User , 20 years ago
Cal and June Pendleton, along with their adopted 12-year-old daughter, Michelle, leave their urban lives in Boston for the peaceful, slower paced life Paradise Point has to offer. Despite the idyllic name and New England locale, Paradise Point is seething with secrets. Set in 1980, the locals fear the century old story of a 12-year-old named Amanda who was blind. Taunted by her peers, Amanda is forced off a cliff to an early death.Amanda's travails parallel those of Michelle. The former honor student who had no demerits or other negative marks on her previous report cards in Boston does an about face in Paradise Point. Michelle initially makes friends quickly with the local children and shines in the class she attends at Paradise Point. Things change for the worse for her when June gives birth to Jennifer and stories about Amanda and her shadowy history crop up. Michelle, like Amanda is injured in a fall from a cliff. Cal rebuffs her and no longer has anything to do with Michelle. Despondent, Michelle turns her affection to a mysterious doll she finds in a closet. She names the doll Amanda and suddenly...Amanda's fury grows. Several younger children with whom Michelle has made friends die in bizarre accidents. Michelle herself has "foggy vision" when she is with "Amanda." She claims to have met the original Amanda who died in 1880 and that she and the dead child share the doll named after her.But was Amanda real? Was a blood stain really in the potter's shed on Michelle's property? If so, whose blood is it? Who left the mysterious sketches? Was Amanda really dead or had she somehow been reanimated? Was Michelle imagining things?The parallel travails of two girls, separated by a century in time makes for some very riveting reading.

One of Saul's Best

Published by Thriftbooks.com User , 20 years ago
This is by far one of Saul's best books. Scary and thrilling, this book is what a horror novel should be. Saul is a hit or miss author, but this is one of his earliest and best works. It is a great place for a reader new to Saul to start. You will not be disappointed.

Guarantee to Chill You in the Death Valley in August

Published by Thriftbooks.com User , 22 years ago
This has to be one of the most subtly, relentlessly, deliciously, and persistently scary book you'll ever read. I've read it over fifteen years ago, but I still remember feeling my scalp tingling, jumpling, sweating, and otherwise behaving erratically while I was reading it in a broad daylight. Highly recommended.

It was a divine book!

Published by Thriftbooks.com User , 22 years ago
This book about an ancient hate in a modern day setting was the BOMB!!!!I totally loved it!It will always be my favorite books.I've read all of John Saul's books and that is the best one of tham all.
Copyright © 2020 Thriftbooks.com Terms of Use | Privacy Policy | Do Not Sell My Personal Information | Accessibility Statement
ThriftBooks® and the ThriftBooks® logo are registered trademarks of Thrift Books Global, LLC