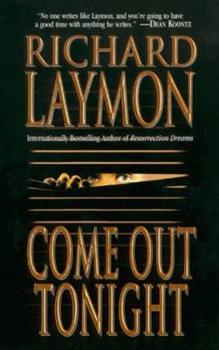 From one of horror's rarest talents (Publishers Weekly) comes a new novel of fear and terror. When a young woman's boyfriend disappears, she heads out to search for him--straight into the path of a psychotic killer. Original.

Published by Thriftbooks.com User , 13 years ago
I LOVED this book. Laymon at his absolute best. If you don't buy any other Laymon book, BUY THIS ONE!

The Pages Might as well be Made of Fire

Published by Thriftbooks.com User , 14 years ago
Warning: If you pick this book up, you will not put it down. And you'll probably read it in the time it takes to watch a movie. I'm seriously not kidding. Personally, I've never read a book so fast in my entire life. (Dr. Seuss included) I even brought it to the bathroom with me, Couldn't even stop for that. From begining to end this book just does not let up. Richard Laymon knows you read in your spare time, He knows that when you're settled in with a book, You want to relax. He's not going to work your brain muscles; But you better believe, you hearts going to be doing aerobics. Sherry (the hot substitute-teacher) and her boyfriend (God, I can't even remember his name now) were about to consumate their relationship, when they discovered their lack of protection. (not flak-jackets, mind you) Sherry being the responsible one sends her boyfriend out to pick some up. When he doesn't come back, she starts to worry. Worries so much, that she goes out looking for him. Up at the conveinence store, Sherry spots his van parked along side the building. She's certain it's his. But where is he? She goes in search of him. Along the way, she enlists help from a young man (one of her students) Toby Bones. A name you will not soon forget. What ensues is about 400 pages of chase scenes, and really bad decisions on Sherry's part. I warn you: (Her idiocy will frustrate you) and; (You will scream into the pages on more than 1 occasion) But all the while you'll be enjoying yourself. As it goes for any Laymon novel, lots of nudity, loads of depravity, severed limbs, violent stabbings, the consumption of flesh, a power drill murder (my personal fave) and a final scene that will leave your head spinning. Laymon is the King of the American Extreme. So sit back, and enjoy the bloody ride. Unless of course you take heart medication. In which case, Enjoy your final book. MORAL OF THE STORY: Condoms aren't nearly as important as breathing.

Edge of your seat book..

Published by Thriftbooks.com User , 16 years ago
This is a very good read....I couldn't put the book down. I highly recommend this book.

Sherry is in for a Rough Night

Published by Thriftbooks.com User , 18 years ago
The Santa Ana winds are blowing, it's a hot night. Duane and Sherry are going to do it for the first time, but Duane's condom disintegrates. Duane jumps into his clothes, goes for another and doesn't come back. After a bit Sherry goes to the 24 hour Speed-D-Mart looking for him. No Duane there, but she runs into one of her students (Sherry's a school teacher), who says he'll help her look for him. Stupid Sherry gets in his car and that is the beginning of the worst night of her life.This book is violent, bloody, has everything from rape, gang rape and torture in it. But Laymon is a wordsmith, draws great, but quirky character and his fans will be delighted with this one.Reviewed by Stephanie Sane
Copyright © 2020 Thriftbooks.com Terms of Use | Privacy Policy | Do Not Sell My Personal Information | Accessibility Statement
ThriftBooks® and the ThriftBooks® logo are registered trademarks of Thrift Books Global, LLC