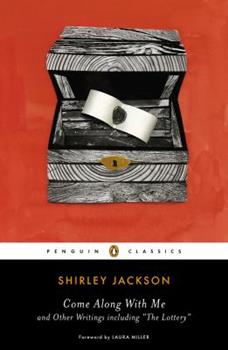 Come Along with Me: Classic Short Stories and an Unfinished Novel

A haunting and psychologically driven collection from Shirley Jackson that includes her best-known story "The Lottery" At last, Shirley Jackson's "The Lottery" enters Penguin Classics, sixty-five years after it shocked America audiences and elicited the most responses of any piece in New Yorker history. In her gothic visions of small-town America, Jackson, the author of such masterworks as The Haunting of Hill House and We Have Always Lived in the...

Published by Thriftbooks.com User , 13 years ago
Shirley Jackson wrote this (her last book) as her psychologist was working intensely on her agoraphobia. It reads like a woman coming out of a funk and for Jackson, that really works! It's a really wonderful book of stories, including the one that first aroused her husband to stalk and date her. The entire book is excellent, but it always strikes me as incredibly unpleasant that her widowed husband put this collection together with his NEW wife and then dedicated it to HER! Shirley surely turned over in her grave on that one.

Jackson's most revealing stories and thoughts on fiction

Published by Thriftbooks.com User , 19 years ago
This book is a fitting testament to Shirley Jackson, as the selections span her entire literary career. It is tragic that a writer of Jackson's caliber should be called away during her productive years, but we are quite fortunate to be allowed a taste of the novel Jackson was working on when she died. That taste is a short one, consisting of six chapters (roughly 27 pages), the final three of which are the first draft. The protagonist is a thoroughly Jacksonian character, sometimes spontaneous and sometimes nostalgic, making a new life for herself in her own peculiar way. Her attempts at shoplifting are particularly telling of her character, but unfortunately her story ends at just about that point. The other stories included here are a special treat. While "The Lottery" is included (just in case someone may not be familiar with it, as Jackson's husband tells us in his preface), the other stories are poignant looks into the lives of rather ordinary people. Jackson had an amazing talent for characterization; the smallest actions can tell us more about a person than his/her overt actions and words, and such little things make Jackson's stories incredibly vivid, illuminating, and personal. Shirley Jackson was a wife and mother whose writing always took second place behind her family. Many of these stories center on family life in all its aspects. "The Beautiful Stranger" and "A Day in the Jungle" deals with the sense of unfulfillment and unhappiness that one partner may come to feel in his/her marriage, "The Rock" speaks to the strength of a brother-sister relationship, "Island" is a somber story about one's end-of-life years. "Pajama Party" is a simple tale of a young girl's birthday slumber party. The story sounds so much like real life that it could be a neighbor telling you about it firsthand; it is also the funniest story Jackson ever wrote There are darker stories where characters become "lost," hopeless, and frightfully alone--"The Bus," "The Little House, "A Visitor" (which is a strange ghost story of sorts). The best stories here, in my mind, are "Louisa, Please Come Home," which has a uniquely Jacksonian twist of the prodigal son motif, and "I Know Who I Love," which illustrates the fact that parents can be much too overprotective of their children.The true highlight of this book, though, are the three "lectures." One gives Jackson's response to the old "where do you get your ideas?" question. Another one addresses the techniques of writing effective fiction. My favorite, though, is an essay describing the reaction of readers to the publication of "The Lottery" in New Yorker Magazine. Jackson includes comments from all sorts of readers, almost all of it negative, which she breaks down into three different categories. While "The Lottery" is certainly an original, successful story, I cannot imagine that so many people would have been so affected that they felt compelled to put their shock and disapproval into words. The r

An intimate tribute to a bright, literary star.

Published by Thriftbooks.com User , 19 years ago
Shirely Jackson was a gifted writer who deserves to be regarded with the same prestige heaped upon Ray Bradbury and others. Come Along With Me, a posthumous collection gathering together early works with lectures and a novel fragment, not only allows readers to shiver and giggle as only Ms. Jackson could make us do, it also offers the reader an intimate glimpse into the creative process (compare the sharp focus in the revised segments of Come Along With Me with the somewhat blurred unrevised sections) and, by printing short stories in order of their publication, the growth of Ms. Jackson's considerable talent for the intelligently ghoulish can be seen and savored. As with her other, more famous stories (i.e The Haunting of Hill House), it is what is implied in the methodical unfolding of the tales that makes for the chills rather than in your face grue. This book, along with Jackson's others, is an essential in any literature loving bookworm's library. Highest recommendation.

A Must for Shirley Jackson Fans

Published by Thriftbooks.com User , 21 years ago
This book is amazing! If you love short stories with a twist (or twisted short stories), you will be mezmerized by this book. The real gems in this collection are the short stories--you will find it difficult to put this book down. If you loved "The Lottery", get this book! The collection was assembled posthumously by Shirley Jackson's most trusted critic--husband Stanley Hyman--and it is pure gold!

The Master of the Haunted Story....

Published by Thriftbooks.com User , 21 years ago
It is a shame that Shirley Jackson died before finished what most certainly would have been her most provocative novel, yet we are lucky that a small portion exists. But, if you don't like cliffhangers (even though this one is on purpose), you'll be disappointed.However, the book contains much more than just the unfinished novel; it is a collection of some of her best short stories and lectures. "The Lottery" is included as is a "biography" of the story displaying some of the reactions received by the shocking story. Other stories such as "Pajama Party" and "A Day in the Jungle" show her talent for the human side, innocence and all. "The Rock" is just as haunting as "The Lottery" and is perhaps even more disturbing.A book for writers, COME ALONG WITH ME also includes several of Jackson's lectures regarding her ideas on the creation of short stories and their value as literature. This is definitely a book for those wanting to become more familiar with Jackson's spellbinding work.
Copyright © 2020 Thriftbooks.com Terms of Use | Privacy Policy | Do Not Sell My Personal Information | Accessibility Statement
ThriftBooks® and the ThriftBooks® logo are registered trademarks of Thrift Books Global, LLC