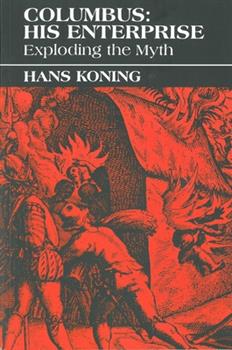 Columbus: His Enterprise: Exploding the Myth

"The book is an idea that has finally found its time." --Publisher's Weekly "I think your book on Christopher Columbus is important. I'm more grateful for that book than any other book I have read in a couple of years." --Kurt Vonnegut

Published by Thriftbooks.com User , 11 years ago
Excellent book and well written, though very short. Impossible to put down once you begin reading. I recommend, however, reading other Columbus books to give yourself a more balanced view. This book is very subjective and highly opinionated. All content is anti-Columbus. The book contains many details you'll never find in other history books or public school texts in America. After reading, you'll hunger for more information.

Published by Thriftbooks.com User , 21 years ago
This is a book that attempts to set the record straight on Columbus the man and the chain of events set off by his voyage of discovery. Koning does not delight in debunking the myth, nor does he gloat in the exose'; rather the tone is one of moral despair over the actual facts. Essentially the Christian Spaniards slaughtered and enslaved as they plundered the New World. Convinced he had found the fabled way to Cathay ahead of the rival Portuguese, Columbus appears every bit the avaricious social climber of his era. Skilled and daring, he was also venal and petty. Koning's portrait is not a pretty one, but then we've had enough of those.Koning takes the revered Samuel Eliot Morrison to task for his sanitized portrait of the Great Explorer. Most reprehensive, in Koning's view, is Morrison's utter disregard for the death and destruction left in Columbus's wake and to which he was a party. Seemingly, Morrison's brand of biographical myopia represents a particularly deadly brand of Western ideology at work, one that cleans up the official record on behalf of the powers that be.Perhaps most praiseworthy in Koning's tratment are the succinct moral parallels he draws between the civilizing forces of Spain in the New World and their 20th century American counterparts in Vietnam, where additional tens of thousands were slaughtered resisting Western conquest. A book like this exposes unmistakably the self-serving mythology that surrounds so much of our official history. Such versions are not misleading by accident, instead they work to a purpose and there seems no better word for describing that purpose than ideological. They are distortions that preserve current institutions of power; namely, those political and economic arrangements that also happen to be products of Columbus's bloody wake. It's interesting to speculate the direction our polity would take were Koning's book, rather than the traditional sanitized versions, required reading in the nation's high schools. Be that as it may, don't expect to see Koning in a Columbus Day parade any time soon.

Published by Thriftbooks.com User , 21 years ago
Koning gives a very valid speculation on Columbus' life and voyages. Thoughout the years, the story of Columbus has been twisted and glamourized, making the people of America believe that he was a hero. Koning goes in to great detail when explaining the truths behind all these mythological ideals. It is an easy read as well as a very good piece of writing.
Copyright © 2020 Thriftbooks.com Terms of Use | Privacy Policy | Do Not Sell My Personal Information | Accessibility Statement
ThriftBooks® and the ThriftBooks® logo are registered trademarks of Thrift Books Global, LLC