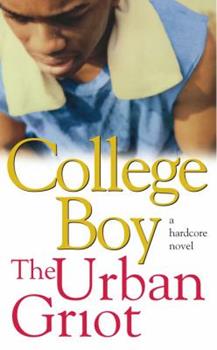 by Omar Tyree and The Urban Griot

After hard-fought battles to include African Americans as qualified students within the white American educational system, the opportunity for higher learning still remains a struggle.This is Troy Potter's story. He is an African American young man from inner-city Philadelphia. He grew up with dreams of becoming a basketball player but now that he's eighteen he must learn the rules to a whole new game: college. How will Troy survive at a predominantly...

Published by Thriftbooks.com User , 13 years ago
Smart, strong & assertive Brother from my hood, you must read this book. Omar prepares you for what you will experience. You can't imagine what awaits you at "their" college. My daughter is currently at a major PA U. and my son is at a NY U. Omar is on point. He has studied and written the games they play. Be prepared, so you can hang in there and graduate.

Now I Don't Feel So Paranoid!

Published by Thriftbooks.com User , 15 years ago
Have you ever been in a situation that makes you think" Did that person really say that to me", or " Are they doing this to me just because I am not White"? The Urban Griot gives voice to these emotions in "College Boy". He not only describes on campus life at this predominantly White institution, but all of the everyday conflicts our Black men deal with, constantly. The edge he gives his main character, Troy Potter, is necessary to survive in our impoverished youths today. The griot has put words to those questions and society forced self-doubt inflicted by dealing with a world controlled by so few. This is not just a read for young people. This book describes my personal walk in my 50+ years in a career field where Blacks are in the minority. It describes, so vividly, actions that produced so many enraging reactions. At the last page, you will find yourself saying, "Whoa". A must read for all ethnic groups so that we all must understand the results of even subtle racism in our Nation.

Published by Thriftbooks.com User , 17 years ago
Troy Potter is a young man who is looking to become a basketball player that has to learn a whole new game and that game is college. Troy believes that everything in the world is a white man's situation instead of believing that everyone has to get his or her own. After being at college for a semester he begins his journey of learning of his heritage and as he learn his heritage he learns how to deal with the simply fact that everything isn't a given but instead you have to earn what you are after. When he returns home for a summer break and realizes that his world at school is so much more he pushes himself to achieve an education to better him. After he meets this young lady name Karen he starts to realize that there is a whole lot more to the world then just the white and black situation. The story itself was a powerful read and one of the best reads I have read in a moment it's defiantly a great read for any high school child entering into college.

It was straight, just a lot of race issue's

Published by Thriftbooks.com User , 18 years ago
Well, to start off I know I am not a Omar Tyree fan but, some of the work that I have read has been okay. College Boy The Urban Griot was an okay book it only took me 2 days to read and when I finished I thought that some of the stuff he said was true but, he didn't have to keep bringing up the issue about white people. The part I didn't like was when his girlfriend came to his dorm and the lady called the police on him. Now I thought that was very stupid. But other than that it's an okay book. Some people may like it some people may not but, I wish people stop saying that Omar Tyree isn't a good writer b/c he is it's just you probably don't like the book.
Trustpilot
Copyright © 2022 Thriftbooks.com Terms of Use | Privacy Policy | Do Not Sell My Personal Information | Accessibility Statement
ThriftBooks® and the ThriftBooks® logo are registered trademarks of Thrift Books Global, LLC