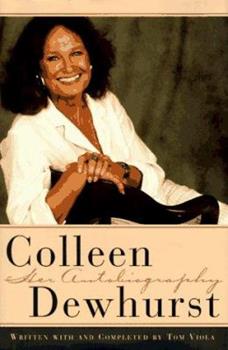 by Tom Viola and Colleen Dewhurst

When brilliant actress Colleen Dewhurst died of cancer in 1991, she left behind the almost completed draft of this warm and funny autobiography. Finished after her death by longtime friend Tom Viola,... This description may be from another edition of this product.

A Woman Whose Heart Was a Grand as Her Smile

Published by Thriftbooks.com User , 14 years ago
While watching a drive-in movie as a teenager, I became aware of an incredible actress. She was playing a woman being stalked by the killer of children in the horror film, "When a Stranger Calls". I could not take my eyes off of this middle-aged actress who was... not beautiful in the classic sense, a bit heavy and possessing an unusally deep and gravelly voice, for a woman. Her character, a lonely, world-weary person, who although street smart and a bit jaded, would flash bits of the warmest eyes and smile that I had ever seen. This was Colleen Dewhurst. This was also the nature of Dewhurst's career in film and televisiom; too often, bringing much more to the materisal than it was capable of ever giving back. This a very good autobiography, finished after her death by family, friends and lovers. It is loving account of the extraordinary life of an, equally, extraordinary woman. A fascinating and very fummy history of the world of American theatre, from the 1940's through the 80's and the myriad characters Dewhurst attracted to her during her time here. The book makes one wish that one had been among the very fortunate "strays" that Colleen Dewhurst was famous for takiing into her home and her heart. I think that you, too, will enjoy her telling (and those who survived her) of her life on the "Farm".

Published by Thriftbooks.com User , 15 years ago
Colleen was a true artist.The fact that her book was ultimately unfinished reflects her life. She did not acknowledge dying, so therefore, she left an unfinished book. It was great to learn more about her, both as an actress and mother, and I enjoyed reading others accounts of events.

Made me wish I had known her!

Published by Thriftbooks.com User , 21 years ago
This was a great biography to read. Not strictly an autiobiography because Colleen never finished working on it herself, but it makes up for that by including many stories & chapters written by her friends, fellow actors & family. This was the first biography I read that really made me wish I had a chance to know the person in life. I've always considered Colleen Dewhurst a respected actor but after reading this, I know that she was truly a warm & wonderful person. She will be missed.

Published by Thriftbooks.com User , 22 years ago
If you're interested in the New York theatre during the 50s and 60s (and later), this book is not to be missed. Dewhurst procrastinated for years about this book; hence it was unfinished when she died. But the additional pieces from her family and colleagues add immeasurably to the book's richness. An unforgettable memoir from a very great artist and personality - her personal warmth and her professional dedication are evident on literally every page. If you care enough to have checked this book out, you will want to have it!
Trustpilot
Copyright © 2022 Thriftbooks.com Terms of Use | Privacy Policy | Do Not Sell My Personal Information | Accessibility Statement
ThriftBooks® and the ThriftBooks® logo are registered trademarks of Thrift Books Global, LLC