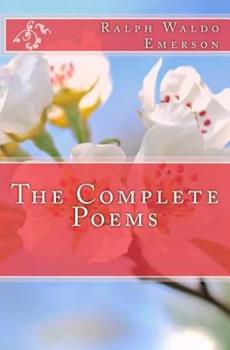 This volume brings together the complete original poems of the great American writer, Ralph Waldo Emerson. Emerson went into the woods for inspiration, spending hours walking and contemplating amidst this most beloved of places. All of nature - the rhythms, the beauty, the mystery, the deep complexity and stark simplicity, the ever-changing and the endlessly enduring - pervades his poetry. To spend time with Emerson is to be invigorated, to be refreshed,...

The poetry of mind is only sometimes soulful

Published by Thriftbooks.com User , 16 years ago
The aphoristic, enigmatic, cryptic, verse of Emerson is collected here in its entirety. Much comes from his notebooks and journals. Emerson was criticized among others by Mathew Arnold for lacking ' the soul' of the poet. And it is true that the music of his verse is often a rough, awkward, intellectual one. And that what is memorable in it comes as a line here or there which could well come from his essays. Nonetheless there are memorable lines and a few poems which enter the heart and mind, perhaps because once read in childhood anthology they remain as part of one's inner landscape. For me Emerson as a poet is primarily isolated like the most memorable Emerson of all, " By the rude bridge/ that arched the flood/ their flag the April breeze unfurled /Here once the embattled farmers stood and fired' "The shot heard round the world". In another sense Emerson appreciated Poetry and was the patron , and capable of recognizing the great value of , arguably, the ur- American poet, Whitman. Reading the poetry is often a quite complicated intellectual exercise. But it is also one which yields new ideas, though perhaps those ideas are not felt as deeply as poetry should make us feel.
Copyright © 2022 Thriftbooks.com Terms of Use | Privacy Policy | Do Not Sell My Personal Information | Accessibility Statement
ThriftBooks® and the ThriftBooks® logo are registered trademarks of Thrift Books Global, LLC