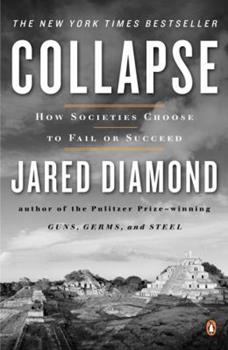 Collapse: How Societies Choose to Fail or Succeed

In Jared Diamond's follow-up to the Pulitzer-Prize winning Guns, Germs and Steel, the author explores how climate change, the population explosion and political discord create the conditions for the... This description may be from another edition of this product.

History, ecology, technology, politics, and a warning rolled into one...

Published by Thriftbooks.com User , 16 years ago
A debate between two camps continues to rage. One side thinks that the modern world continues to careen toward a non-sustainable future and impending doom. The other group thinks that "environmentalists" exaggerate their claims about a coming ecological crash. As usual the sides remain somewhat unproductively polarized with neither giving an inch to the other. This book's title exposes where Jared Diamond's sympathies stand, but he also takes some surprisingly neutral views. For one, he claims that some contemporary businesses have in fact successfully taken environmental concerns into consideration, and that these concerns have made them money and boosted their respect globally. Diamond doesn't believe that big business and environmental groups necessarily remain indissoluble enemies. And he goes further by suggesting that environmentalists should unabashedly praise those companies that have suceeded in balancing economics with ecology. "Collapse", though admittedly more slanted towards the environmental side of the continuum, nonetheless tries to narrow the gap between the two aforementioned camps. "Collapse" takes the reader on a dizzying historical and global tour. The chapters weave in and out of modern, ancient, and medieval worlds. Along the way Diamond extrapolates which behaviors have threatened (or arguably are currently threatening) a significant inexorable decline in a particular society's population. By juxtaposing past and present societies he hopes to reveal the simularities between societies that no longer exist and the trends of the world today. The book surreptitously asks whether our current world is threatened by a global collapse. Diamond uses a "five-point framework" to analyze various societies. These comprise certain behaviors and characterstics, namely, environmental damage, climate change, hostile neighbors, friendly trade partners, and a society's responses to its environmental problems. With these tools in hand, Diamond travels to Montana, Easter Island, the Pitcairn and Henderson Islands, the ancient and medieval Anasazi cultures in North America, the Maya, Norse Greenland, New Guinea, Tikopia, Tokugawa-era Japan, Rwanda, Hispaniola, China, and Australia. Each of these societies, both past and present, receive analysis in terms of the five point framework. For example, the Greenland Norse collapsed, according to Diamond, due to all five factors. Whereas Easter Island collapsed only due to three. But Diamond also discusses past successes such as Tikopia and Tokugawa Japan. These two societies managed to control their resources and avoid the others' fate. And those fates included horrifying ends in wars, mass starvation, and sometimes cannabalism. The discussion of Norse Greenland receives three full length chapters (which at times seems a little too lengthy). Why? In a talk that Diamond gave for the Long Now Foundation in 2005 (downloadable from the Foundation's website), he claimed that he wanted to show that coll

Epic look at a major theme in history and today's world

Published by Thriftbooks.com User , 17 years ago
_Collapse_ by Jared Diamond is an absolutely epic look at why some past societies that faced grave environmental problems failed, why others succeeded, and what this "rich database" of past civilizations tells us about the current and future problems we face in our world. By the word collapse, Diamond meant a drastic decrease in population as well as in the economy and political and social complexity of a society, as opposed to a more gradual or milder form of decline. While he admitted that sometimes the distinction between a milder form of decline and a collapse is in some cases arbitrary (how drastic does the decline have to be before it is labeled as a collapse), Diamond analyzed a number of "full-fledged collapses" that few people would disagree with classifying as such. The primary theme of this book is the nature of environmental problems that society face, which he listed in eight categories (habitat destruction and particularly deforestation, soil problems such as erosion and salinization, water supply and management problems, overhunting, overfishing, effects of alien species, human population growth, and increased per capita impact of people), and what they choose to do (or not do) about them. Diamond made two additional points. The first is that it is naïve to assume that societies have collapsed solely due to human-caused environmental damage. He provided a five-point framework of possible contributing factors, some of which were at work in the collapse of a given civilization, while others were not. Four of these factors - environmental damage, climate change, hostile neighbors, and friendly trade partners (or the lack thereof) - may not prove significant to a particular society's fortunes, but the fifth factor (a civilization's responses to its environmental problems), always does. The second point is that Diamond is not an advocate of any philosophy of environmental determinism - that the environment in which a civilization exists in means that it will ultimately fail. While for instance the moai-erecting civilization of Easter Island collapsed, the society found on much smaller Tikopia Island (1.8 square miles) has existed for 3,000 years (and still exists) on an island with sustainable cultivation; the Greenland Norse ultimately failed while the Inuit on the same island still exist. After an introduction of concepts - including a comparison with modern day Montana - Diamond analyzed in depth the collapse of several past societies, namely that of Easter Island, Pitcairn Island, Henderson Island (both islands are in the Pacific and formerly had Polynesian societies which died out), the Anasazi, the Classic Lowland Maya, and the Greenland Norse, the last of which he spent a great deal of time discussing and made for absolutely fascinating reading. More briefly he analyzed some past (and still existing) societies that overcame grave environmental crises (that of Iceland, Tikopia Island, the New Guinea highlands, and Japan of

Published by Thriftbooks.com User , 17 years ago
This is a fascinating examination of how ecologically speaking, we may be doomed to repeat history's mistakes due to the lack of their immediacy to our consciousness. The prospect of self-preservation on a societal level can be a daunting one, but it is a profound question author Jared Diamond handles with skill and panache in his sweeping book. He primarily covers four extinct civilizations, showing how human-led environmental damage was at least partially responsible for their devastation and illustrating how the ramifications of such behavior persist today. As an evolutionary biologist trained in biochemistry and physiology, Diamond deftly uses comparative methods in his areas of expertise, such as archaeology and anthropology, to marshal evidence that sustaining societies over time depends primarily on the quality of human interaction with the environment. His arguments are compelling and act as a direct counterpoint to more common thinking where ideology, culture, politics and economics help shape the course of history. But the author is far more focused on what they bear on the far more important relationship society has with its climate, geography and natural resources. The overriding theme of human history, the author feels, is that societies aren't murdered; they commit suicide. He uses the Viking settlements on the coast of Greenland as a prime example. While it did get colder in Greenland in the early 1400's, it didn't get so cold as to make it uninhabitable. The Inuit survived long after the Norse died out, and the Norse had all kinds of advantages, including a more diverse food supply, iron tools, and ready access to Europe. The problem was that the Norse simply couldn't adapt to the country's changing environmental conditions. Human accountability also shaped the fate of Easter Island where seafaring Polynesians settled over a thousand years ago. They cut the trees for canoes and firewood and used logs to help transport huge statues weighing as much as 80 tons. Eventually, they chopped down all the forests, and their society collapsed in an epidemic of cannibalism. By 1600, all of the trees and land birds on Easter Island were extinct. Diamond covers similarly fatalistic behavior in the native American Anasazi tribe in the southwestern U.S. and the Mayan civilization in Central America. Diamond's perspective is not just historical, as he discusses in depth what is happening now in Somalia, Rwanda, Haiti, China, and Australia, as well as in Montana, a state that once was among the wealthiest in the nation but now struggles with poverty, population decline, and environmental problems. The author remains hopeful by giving more uplifting examples of societies that have found ways to sustain themselves without overexploiting their environments. His conclusion is that what determines a society's fate is how well its leaders and citizens anticipate problems before they become crises and how decisively a society responds. But as we know,

The discipline of geography is back!

Published by Thriftbooks.com User , 17 years ago
"Collapse" is a wonderful book! Prof. Diamond combines hard science, rigorous historical research, and his own personal knowledge of people from the Bitterroot Valley of Montana to the west coast of Greenland to Rwanda to the highlands of New Guineau. He pulls together clear and compelling explanations of how events unfolded (and are still unfolding) in various parts of the world. His accounts of various human communities draw on real data from a wide variety of academic fields, including isotope analysis, pollen analysis, tree-ring analysis, seismology, agronomy, archaeology, sociology, and even the history of religion. His explanations of each of these disciplines are lucid without oversimplification. But, the strength of the book comes from the the way he combines results from all these fields to create straightforward narratives of what might have happened as various communities rose and fell. If I were I high school "social studies" teacher I would be talking to my principal today, saying "I want to put together an honors-level geography course and I want to use this as the textbook." I do have one criticism. The subject matter of the book is tremendously consequential to people alive today, and hopefully "policy wonks" in governments will study the book and take it seriously. But, the title is a bit inflammatory. What's more, Prof. Diamond makes sure to explain the significance for the United States of his accounts of the demise of various ancient communities. Some of these explanations extrapolate from ancient situations to modern in a way that isn't quite as solid as the rest of the book. Diamond's extrapolations are very cleary marked as such. However, I am still afraid that they, combined with the title, will provide an excuse for people to dismiss the book as a "pro-environment anti-business" ideological polemic. That would be unfortunate, because it is actually balanced and nuanced in its explanation of the human condition.
Trustpilot
Copyright © 2022 Thriftbooks.com Terms of Use | Privacy Policy | Do Not Sell or Share My Personal Information | Accessibility Statement
ThriftBooks® and the ThriftBooks® logo are registered trademarks of Thrift Books Global, LLC