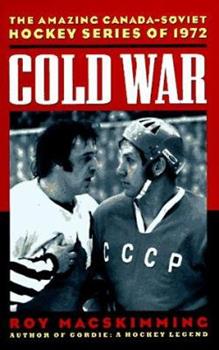 It wasn't just hockey -- it was war. That's how countless fans still remember the fabled 1972 Canada -- USSR Challenge series, the first-ever confrontation between hockey's reigning superpowers.... This description may be from another edition of this product.

Published by Thriftbooks.com User , 12 years ago
Yes, officially Canada won the seminal 1972 Summit Series. In actuality, this cherished central Canadian fable is based on cheating. Precisely, it was the willful intent to injure the USSR's greatest forward, Valeri Kharlamov (enshrined, by the way, in the Hockey Hall of Fame). Kharlamov was the best player in the series for the USSR. Here is the story, and it indisputably documented in this book. Canada was facing defeat after the Russians won the 5th game in Moscow (the 8-game series stood at 3-1-1...another loss and the Canadians would be mathematically eliminated from any chance at victory in the series). And little, proud Canada simply could not accept defeat in 'their game'. So what did they do? Assistant Coach and ex-Montreal Canadiens 'goon' John Ferguson asked the great Bobby Clarke to intentionally injure Kharlamov by swinging his stick down hard on No. 17's leg, resulting in breaking his ankle. To his credit, Kharlamov attempted to play on, but was obviously the 'worse for wear', and was not a factor thereafter. This is detailed in the book. The Canadians CHEATED, and ignominously and intentionally injured the opposing team's scoring leader, just because 'little Canada' couldn't bear losing this fantastic series. In that the series came down to a last minute goal, logic alone tells you that the intentional injury supplied the margin for victory. So these facts undermine the 'victory' and shows that Canada was willing to resort to criminal action in order to win. Oh, no, Canada!

Published by Thriftbooks.com User , 13 years ago
If you are a hockey fan that grew up during this era and love hockey buy this book. Its all the behind the scenes "BS" that went on during this historic international hockey event on both sides, but mostly the Russians. Read about what lumberjack Bobby Clark was ordered to do and he carried out that had an impact on the results. I could not put it down. This is a book where I read it but will never sell it.

Published by Thriftbooks.com User , 14 years ago
BRILLIANTLY WRITTEN AND RESEARCHED. IT SEEMS ANYONE WHO HAD AN OPINION OF THE STATE OF HOCKEY AS IT WAS IS 1972, WAS INTERVIEWED IN THIS BOOK. EASILY THE BEST HISTORICAL SPORTS BOOK I HAVE READ. I WAS BORN IN 1968 SO I HAVE NO MEMORY OF THIS SERIES, BUT SO MANY OF THE SOVIET PLAYERS WHO FIRST BECAME KNOWN FROM THE ORININAL 72 SERIES WERE ALREADY VERY WELL KNOWN AS THE SERIES TURNED INTO THE 'CANADA CUP' THAT I FOLLOWED IN 1976 AND 1980. PETROV, KHARLAMOV AND YAKUSHEV AND ALL THE EARLY RUSSSIAN PRE NHL GREATS. THE BEST PART IS THE HISTORY OF SOVIET HOCKEY AND HOW THEY CREATED THIER OWN STYLE OF PLAY DIFFERENT FROM THE NHL AND HOW THEIR INNOVATIVE TRAINING, CONDITIONING AND AGGRESSIVE OFFENSIVE ATTACKING STYLE, CONTRASTED WITH THE NHL'S 'TOUGH' DEFENSIVE GAME. RUSSIA'S GREAT AMATUERS AND CANADA'S MIGHTY PROFESSIONALS MET FINALLY IN 1972 AS THE SOVIET NATIONAL TEAM FACED THE NHL'S BEST IN AN 8 GAME EXHIBITION SERIES. THE SERIES WOULD REDEIFNE HOCKEY AND INTERNATIONAL SPORT FOR ALL TIME. THE SOVIET NATIONAL COACH AT THE TIME PREDICTED THAT ALL FUTURE HOCKEY WOULD BE A MIXTURE OF THESE TWO DIFFERING STYLES AS BOTH SIDES WOULD INFLUENCE EACH OTHER IN THE FUTURE. TRULY PROTHETIC WORDS. ANYONE WHO IS A FAN OR STUDENT OF THE GAME OF HOCKEY, THIS IS A FINE BOOK, WHICH IN GREAT DETAIL TELLS THE COMPLETE STORY, BOTH RUSSIAN AND CANADIAN OF AN ATHLETIC EVENT WHICH MAY BE ONE OF THE MOST IMPORTANT SOCIAL AND POLITICAL EVENTS CERTAINLY IN CANDAIAN HISTORY. THAT IS NO OVERSTATEMENT. THINK OF DON CHERRY WHEN HE TALKS ABOUT EUROPEAN PLAYERS. THIS WAS THE FIFST TIME CANADIAN FANS SAW EUROPEANS COMPETE WITH AND AT TIMES DOMINATE CANADIAN "BOYS" AT CANADAS GAME. AND PEOPLE BEGAN THE ARGUMENT, WHICH IS BETTER HOCKEY? GOONS OR GRACE? THE ISSUE OVER WHOSE STYLE OF PLAY IS SUPERIOR HAS POLORIZED CANADA EVER SINCE. THIS WAS A HUGE DEAL IN CANADA, AND THE BOOK TELLS IT SO WELL. IT IS BREATHLESSLY WRITTEN A MUST READ

Cold War - A piece of "Canadiana"

Published by Thriftbooks.com User , 21 years ago
"Cold War" is a beautifully written (and researched!) book about the greatest series ever played (in any sport!) Every Canadian remembers where they were when Paul Henderson Scored the game and series winning goal in Moscow, and reading this book literally sent shivers down my spine, and brought back memories long forgotten. It also opened doors to many "behind the scenes" facts that I did not know. But most of all, it reminded me of how arrogant and over-confident we all were, and as Ken Dryden put it: "NEVER, EVER, UNDERESTIMATE YOUR OPPONENT". Of course we had ....This point was driven home to an entire nation in September of 1972 when Canada's "professional" hockey stars (our "best of the best") played this dramatic eight game series against the "amateurs" of the Soviet Union. This series was the first ever between the Soviets and NHL players, and almost all Canadians, myself included, thought Canada would win all eight games easily. That is not what happened though, the Soviets stunned everyone by going 2-1-1 on Canadian ice. Canada came back in Moscow, winning 3 of 4 dramatically, all one goal games. Against a backdrop of the "cold war", and Canada's pride and identity at stake, even non-hockey fans got caught up the unfolding drama. Canada's pride was hurt for sure, but it forced our players to dig deep within themselves to pull out the skills that produced an amazing victory, despite tremendous obstacles. (such as a hostile press, star players quitting, and officiating that was horribly biased against Canada) The Soviets on the other hand had violated this very same rule when the teams got to Moscow, and clearly had lost their psychological edge. In short, they thought they had the series won. The series forced Canadians to look at themselves in a way they hadn't before, and in the decades since we have seen improvements in the game itself. In other words, the bar had been raised.Roy MacSkimming deserves six stars for this one, he captured beautifully this unique series that really had the full range of human emotion, from the total shock of the the Soviets 7-3 rout in game one to the the hosile reaction of Canadian fans and media towards their own countrymen, to redemption, complete joy and relief in Moscow. Every Canadian, and American for that matter, should read this book, it goes beyond a sporting event really and exposes human nature. On a personel note, I was in English Class in Cranbrook B.C. when Henderson scored "The Goal" on September 28, 1972. Most of Canada's schools, businesses and government offices closed that day, however we were not among those lucky. We did lobby our teacher however, and we watched the last two periods of game on TV despite her objections. Had she not relented, she would have regretted it forever ... the place went nuts!

Published by Thriftbooks.com User , 21 years ago
For those who were very young (like myself) when the series was played and grew up not with the players mentioned but instead with such Russian players as Fedorov and Bure in the NHL, this book is a must to understand how these 8 games played in 1972 forever changed the face of international hockey -- The Canadians (and people in the States as well) realized that we didn't have a monopoly on how to play the game, and the Russians, for all their tremendous preparation and effort, saw that Westerners could rise to the occasion, and ultimately "opened their doors" just enough to begin the journey that today finds several NHL stars hailing from former Warsaw Pact nations. MacSkimming does an excellent job of both drawing upon the original 1972 news accounts and quotes as well as undertaking a host of interviews and research 20+ years later to give a renewed perspective on the games, the players and what it all meant then and now. Even if you know how "it ends," (if you don't you will find out early in the book) the rising action is expertly developed, and you feel (in your mind, at least) nearly the same sense of pride and accomplshment at the end as the Canadian players must have felt. Highly recommened for anyone w/ an interest in hockey and/or the "old" Soviet Union.
Copyright © 2022 Thriftbooks.com Terms of Use | Privacy Policy | Do Not Sell My Personal Information | Accessibility Statement
ThriftBooks® and the ThriftBooks® logo are registered trademarks of Thrift Books Global, LLC