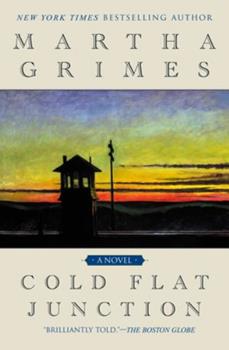 (Book #2 in the Emma Graham Series)

Martha Grimes 's Hotel Paradise was hailed by Booklist as "superb...beyond genre...one of the year's best." Now, Grimes returns to the same small town, intertwining the threads of one young girl's unexplained death with another young girl's attempt at making sense of her own life.

I love Emma even more in this second novel...

Published by Thriftbooks.com User , 17 years ago
First thing you need to do is throw out any ideas of this being like a Jury novel. Then get Hotel Paradise so you can read it and understand what is going on in this book.Emma is simply a wonderful character and she jumps out of the book and comes to life. It's almost hard to imagine she is 12. The mystery still isn't quite over I wonder if Martha Grimes will tell us more in another installment.

Published by Thriftbooks.com User , 19 years ago
What a wonderful book and audio-book! This is an extraordinary coming-of-age novel, with characters that you really care about and a haunting, ambiguous story. Bernadette Dunn is a wonderful narrator for this story as well. I bought a copy of the book after listening to it on tape first, and her voice echoes through my reading.Emma Graham is a wonderful, rare, twelve year old narrator, perched right on the verge of adulthood. Her imaginative child self and her growing intuition about the interesting adults in her life sometimes work together here and sometimes battle each other in a fascinating mix.This is also a beautifully lyrical novel that takes place in a world that seems quite timeless. We are in a recognizable world but not necessarily a specific time.Definitely worth it! It's a gem!

a gem of a book

Published by Thriftbooks.com User , 19 years ago
"Cold Flat Junction" is the conclusion of the mystery/coming-of-age tale begun in Martha Grimes' magnificent "Hotel Paradise." (Be sure to read "Hotel Paradise" first!) It's set in an indeterminate time (there's a mention of nouvelle cuisine and the United Nations on the one hand, yet the novel is riddled with train travel, small-town drugstores with soda fountains, a McCrory's, records and horsehair sofas)in an indeterminate place (somewhere on the Eastern Seaboard north of Maryland). You get the sense that both books are a fable of sorts. Grimes' sequel (a continuation really) surpasses the first novel in recounting the cleverness and tenacity of its 12-year-old heroine. Every character is true-to-life from the sympathetic sheriff with the philandering wife to Maude, the good-hearted waitress at the Rainbow Cafe, to the speech-addled Wood brothers to the nasty and domineering 16-year-old Reejane, Emma's nemesis. The ending gives me hope that Ms. Grimes will continue the saga with yet another book about Emma Graham.

The real Martha Grimes stands up

Published by Thriftbooks.com User , 20 years ago
Martha Grimes boggles my mind. She's written a lot of books I admired, a few that seemed lacking, and at least one that struck me as a total disaster (see "Bite the Moon"), but here she dispels all fears that her skills as a writer have atrophied. There is scarcely a paragraph in this book that doesn't contain a gem of humor, poignancy, or simply character observation worth savoring. It's especially interesting that the theme is similar to the one in the much maligned effort mentioned above - a lonely and resourceful kid tackling some very adult problems. But here there's something very genuine about the emotions. The characters are wonderfully realized and their interaction is often hilarious. It's a coming-of-age story as well as a mystery, evocative and lyrical and clearly the work of a master.

Twelve years old as I wished I remembered it

Published by Thriftbooks.com User , 20 years ago
Martha Grimes gets right there in this one with a twelve-year-old heroine Emma Graham who understands her life's limitations and expansions. The wry humor wipes out the pity you might feel for a fatherless girl, stuck waitressing at the family's seen-far-better-days hotel while her mother takes a vacation without including her or even explaining why she's left behind. The mystery left over from HOTEL PARADISE deepens and winds around here and there through some interesting characters, many of whom we'll grow to like because they're treating Emma with some respect and kindness. This is a great book.
Copyright © 2020 Thriftbooks.com Terms of Use | Privacy Policy | Do Not Sell My Personal Information | Accessibility Statement
ThriftBooks® and the ThriftBooks® logo are registered trademarks of Thrift Books Global, LLC