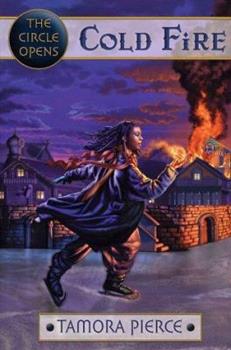 Daja and Frostpine expect to spend some peaceful weeks with old friends in Namorn. But things begin to go awry as soon as they arrive. First Daja discovers that their hosts' twin daughters are mages. Then mysterious fires begin to blaze across the frigid city. Daja works with Bennat Ladradun, to locate what seems to be a serial arsonist. Daja's magic saves the city from going up in flames, but nothing and nobody can save her the disappointment of...

The usual brilliance from Tamora Pierce

Published by Thriftbooks.com User , 19 years ago
Daja and Frostpine have come to stay with an old friend in the city of Kugisko in Namorn. Here Daja is learning the art of fine metal work and spends her time making fine jewellery for her hosts. Then she discovers that the twin daughters of her hosts are mages - and she has to teach them or find them teachers. In the background of all this is Daja's growing friendship with a man who fights the increasingly dangerous fires that threaten the city. Daja's living metal can help him fight the fires - but there is something sinister about the fires themselves. I loved this book. I think that so far this is the best book in the Circle Opens quartet because it shows one of the original four students (Daja) facing one of the biggest emotions (betrayal). Without ruining the story Daja forms a friendship with a man who has taken on the task of teaching the people of Kugisko how to fight the fires that are so dangerous to their wooden city. To help him Daja creates a pair of fire proof gloves from the living metal that comes from her skin. Woven into the story is the second strong storyline of Daja discovering that the twin daughters of her hosts have ambient magic - and it is Daja's responsibility to either teach them how to control their magic - or find teachers for them who can teach them. Daja is also a student as they try to teach her how to skate on the frozen canals of their city. I highly recommend this book and can't wait for the fourth book to come out.

Published by Thriftbooks.com User , 19 years ago
Being a smith mage, Daja is experienced in working with fire. And as we saw in Daja's book she also knows how to work against it. But in this book Daja has a bigger problem than ever before, and this time she doesn't have her Sandry, Briar or Tris to help her. In the beginning of the book Daja and Frostpine are living with Frostpine's old friend who has twin daughters, Nia and Jory. Daja discovers that the twins are ambient mages, with powers in carpentry and cooking. Soon Daja is teaching them meditation tactics, which turns out to be much harder than she thought and has started looking for teachers around the city. Unlike Briar and Sandry Daja has no trouble finding them teachers but she finds trouble elsewhere.Fires are occurring like crazy all over the city, fires that Daja and Frostpine get dangerously involved with. Daja befriends a local fire fighter, Ben, and even works to help make him special gloves that will repel fire. But as she becomes more involved with the fire she discovers that they seem too perfect, maybe even set. Soon she is after a deadly arsonist. Can she stop him before it's too late?Just like the rest of the book in the series, Cold Fire has proved to be suspenseful and filled with fun and interesting characters. Daja and Frostpine make wonderful returns and we also get introduced to new great characters like the two very different twins, Jory and Nia. If you're a fan of any of the two Circle quartets read this book. Though it's not as good as Street Magic, in my opinion the best in the series so far, it's still a great book!

Published by Thriftbooks.com User , 19 years ago
In recent years, Tamora Pierce has not written a bad or even mediocre book. "Cold Fire," third in the "Circle Opens" series, is no exception. The series continues where the "Circle of Magic" books left off: the four mages are now fourteen, and have left Discipline Cottage in Emelan to travel with their teachers."Cold Fire" tracks Daja Kisubo, metal-mage and Trader, as she and her teacher, Frostpine, travel north to Kugisko in the Namorn Empire, where they stay with old friends of Frostpine's. During their visit, an arsonist sets fires all through Kugisko: it is up to Daja to find the perpetrator and, ultimately, help bring him to justice.The most compelling part of the book was the intense psychological portrait of the criminal. Pierce portrays his rationalization of his crimes so well that the reader almost believes it - though not quite, of course.The characterization was very good here, too: that of the arsonist, and others, too! I particularly liked Nia and Jory, Daja's twelve-year-old students (beginning mages themselves). Daja's character was matured and developed, as well. There was a slight problem, though: the "Circle Opens" books are supposed to take place four years after the "Circle of Magic" books begin - which would make Daja fifteen, as she was eleven in "Sandry's Book." But she is fourteen in "Cold Fire"! That can be ignored, though, and it's such a tiny quibble.One of the best things in this book was the vivid picture of Kugisko: the costumes, the frozen canals, the people, and the customs. Namorn, I have figured out, is loosely based on Russia, and my mother assures me that her Russian grandfather did indeed drink his tea from a glass and strain it through a mouthful of sugar or cherry preserves - a ritual depicted in "Cold Fire," and one that disgusts Daja! This is one of the reasons I like the "Circle Opens" books: I get to learn about realistic cultures filled with both the magic of mages, and that of different peoples.The "Circle of Magic" books are my favorite of Tamora Pierce's, and I have read every one of the author's works. But I love "The Circle Opens" almost as much, and "Cold Fire" is a welcome addition to my bookshelf. It combines the wry sense of humor in Pierce's earlier books with the eye for detail in her later ones to make a wonderful read and the best book in its series.

One of Pierce's Best books!!!

Published by Thriftbooks.com User , 19 years ago
The story takes place in a series of Normanese islands where most houses are wooden. Recently some unexplained fires have occured and Bennat Ladradun, a widower fire fighter, is the islands only protection. Meanwhile Daja discovers that the Bancanors', her hosts', twins are ambient mages. Jury has cooking magic, and Nia has carpentry magic. Daja sets them up with teachers,for everything except meditation. After seeing the sometimes-futile attempts of the firefighters, Daja tries to help them fires by using her magic, and in the process befriends Ben. When the conclusion that the fires have been set is made, Daja has to to suspect someone who had done so much for the Kusigu Islands, Ben.This book simply blows away books 1 and 2 of the Circle Opens. I think it's partially because there are two young mages instead of one. However, it would have been better if Daja had taught them more than meditation. Overall, though, it is an excellent book, and one of Pierce's best.

Excellent addition to 'The Circle Opens'

Published by Thriftbooks.com User , 19 years ago
This was a fascinating book in which Tamora Pierce explores a unique culture in such detail and with such vibrancy that it's difficult to believe it is truly fantasy. This is perhaps my favorite of The Circle Opens series so far - the character development of two such beloved personalities as Daja and Frostpine was handled beautifully. I would like to say however, that these books are NOT meant for elementary school readers - another review comments on this, and I agree that this is for more advanced readers, though I am puzzled by a comment that other books from this series are 'suitable' for the elementary library - because other instalments deal with such topics as child-poverty, deadly illness and assasination. I wouldn't let a small child read them. I would, however, recommend them to any of the voracious readers that I teach, and indeed, to any children in my family. Well done Ms Pierce.
Copyright © 2020 Thriftbooks.com Terms of Use | Privacy Policy | Do Not Sell My Personal Information | Accessibility Statement
ThriftBooks® and the ThriftBooks® logo are registered trademarks of Thrift Books Global, LLC