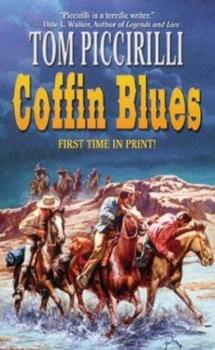 A man must leave behind his quiet life as a coffin builder to help save his ex-lover?s new husband, even though the dangerous trek to Mexico may get him killed.

The further adventures of Priest McClaren and Lamarr

Published by Thriftbooks.com User , 16 years ago
Coffin Blues presents the further adventures of Priest McClaren and Lamarr, the two unlikely heroes introduced in Piccirilli's outstanding 2002 western, Grave Men. Piccirilli picks up their story almost exactly where he left it, with McClaren still trying to deal with the tragic death of his parents, his sister's past life as a bounty hunter, and his passion for his ex-lover Sarah. This time out, McClaren and the black ex-Union soldier Lamarr are asked by Sarah to travel to Mexico to rescue her new husband, Septemus Hart (Lamarr's hated daddy), who's being held hostage by Don Braulio, a local baddie who likes to dispatch his victims with custom made knives. Doing so, they find danger and intrigue, encounter old enemies, and discover some ugly truths about themselves and those around them. Piccirilli continues to show a real affinity for the western, producing a story with generous helpings of humor, action, and existential angst. It's obvious he knows his characters inside and out, and that he's been living with them for quite some time-the story seems to be being told by someone who witnessed the events firsthand. Everything else works just splendidly-Piccirilli's dialogue shines, and the set pieces he creates are harrowing, often humorous, and very true to life. Check out Chapter Two for the best example of this-Piccirilli's writing in this scene is particularly vivid and cinematic. A tale of tortured, complex characters trying to make sense of their twisted lives while also trying to "do the right thing," Coffin Blues is wildly entertaining, featuring the kind of writing that keeps you flipping pages past the point of exhaustion. A traditional western skewed by Piccirilli's offbeat sensibilities, Coffin Blues should appeal to horror and western fans alike.

Nobody does it better.

Published by Thriftbooks.com User , 16 years ago
You want a page-turner? You want a Western with a little weirdness mixed in? You want fine writing? Look no further, pardner. Piccirilli always delivers the goods.
Copyright © 2020 Thriftbooks.com Terms of Use | Privacy Policy | Do Not Sell My Personal Information | Accessibility Statement
ThriftBooks® and the ThriftBooks® logo are registered trademarks of Thrift Books Global, LLC