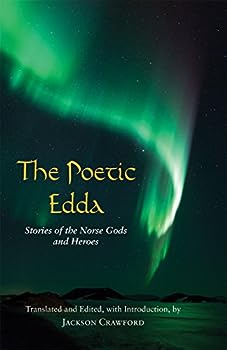 The Poetic Edda: Stories of the Norse Gods and Heroes

by Anonymous and Unknown

"The poems of the Poetic Edda have waited a long time for a Modern English translation that would do them justice. Here it is at last (Odin be praised ) and well worth the wait. These amazing texts from a 13th-century Icelandic manuscript are of huge historical, mythological and literary importance, containing the lion's share of information that survives today about the gods and heroes of pre-Christian Scandinavians, their unique vision of the beginning...

Published by Thriftbooks.com User , 17 years ago
The Edda is for the Nordic European countries, what the Iliad meant for the old Greek. It is THE TREASURY - in a poetical form - of their MYTHOLOGY and of lots of their heroic stories and the wisdom of their proverbs.This book embodies the ethics and the cultural life during the transition period from paganism to christianity (about 8th until 13th century). A world opens of gods, supernatural beings and creatures AND of the protagonists of a heroic (pre-)history. The existence of man in his natural environment and the place of "the family" in the world they lived in, as for so gets a meaningful, coherent interpretation.The songs of the gods make a mysterious power of attraction on the reader of today. In the "vision of the famous visionary VOLUSPA", birth and decline of the old world of gods are treated AND at the same time the author made a sketch of the new world order. This vision remains, up until these days, the peak, THE highlight of Nordic literature. The heroic poems are a true glorification of the past. The power of the characters in the poems, as well as the events that take place here, go beyond the "normal-human life" out of later times. What is more, the tragic adventures and fortunes of the family, the race of the "NIBELUNGEN" have been a tremendous source of inspiration for so many writers, thinkers, even musicians. I hereby think in special about the famous, outstanding collection of opera's by the German composer Richard WAGNER: his "RING DES NIBELUNGEN", which gives such a fantastic, colourful insight in what happened centuries ago!This work is one of the main sources for Nordic AND German mythology which gives a splendid view on the misty (sic!!) "WALHALLA" of the Western European, more specific the Icelandic-Scandinavian AND German, Dutch even English ancestors. THE EDDA IS A BOOK FOR EVERYONE, as the Iliad or Odyssey are, and like the two latter is SO IMPORTANT for the development and evolution of Europe. A book from the top of the shelves of REAL GREAT WORLD LITERATURE, easily readable for ALL OF YOU.A PIECE OF MY HEART, WARMLY AND VERY HIGHLY RECOMMENDED FROM THE BOTTOM OF MY WHOLE BEING !!

Published by Thriftbooks.com User , 21 years ago
It is good to find an edition with Norse names translated into English. I have the Viking Society's bi-lingual edition of 1903 with the entire text in Old Norse, but with many obscure names left untranslated. For the information of the reviewer who thinks Gandalfr means Wind Elf, it doesn't; it means Wand Elf. Vindalfr means Wind Elf. What is more critical than whether names are translated or not is that they be kept in the order in which they are found in the original Norse text. All of the lists of names in the Eddas were deliberately arranged. For this reason modern translations that rearrange the names for stylistic reasons impoverish the original texts; I am referring mainly to Auden's translation which is nothing more than an elegant butchery!

Published by Thriftbooks.com User , 21 years ago
Unlike many translations this one is easy to understand, very good if you're beggining on this subject. Many things you'll think are complicated you'll find in the end of the book with explanations, even if it's: this passage is not very clear... which is common because, you know it's a really old material. Also has a little "dictionary" in the end! Great work, great book

Published by Thriftbooks.com User , 22 years ago
"Hear me, all ye hallowed beings, both high and low of Heimdall's children...." This beautiful and poetic translation of the Poetic Edda echoes the beauty of the original Old Icelandic. It would be better of course to read the Edda in the original, but if you don't speak Old Icelandic yet, this is the translation to use. It has the convenience of having numbered stanzas and doesn't simply omit stanzas, like some translations geared toward those wholly ignorant of the traditional lore of the Nordic people, and so is suitable for study. If you are unfamiliar with the Poetic Edda's contents: The poems, dealing with the Norse Gods, are to the people of the North what the stories of Moses, Abraham and Isaac are to the peoples of the Middle East. This book should be on the bookshelf of every educated English-speaking person, along with a set of Shakespeare and the King James Bible.
Trustpilot
Copyright © 2022 Thriftbooks.com Terms of Use | Privacy Policy | Do Not Sell or Share My Personal Information | Accessibility Statement
ThriftBooks® and the ThriftBooks® logo are registered trademarks of Thrift Books Global, LLC