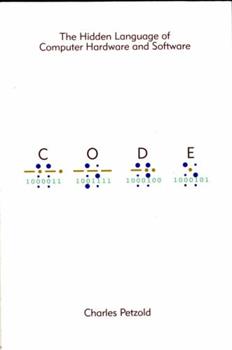 Code: The Hidden Language of Computer Hardware and Software

What do flashlights, the British invasion, black cats, and seesaws have to do with computers? In CODE, they show us the ingenious ways we manipulate language and invent new means of communicating with each other. And through CODE, we see how this ingenuity and our very human compulsion to communicate have driven the technological innovations of the past two centuries. Using everyday objects and familiar language systems such as Braille and Morse code,...

Great, but it's not ALL for a "Novice"

Published by Thriftbooks.com User , 20 years ago
The book starts out very solid, describing all the building blocks of a computer. The beginning is the best book I've seen so far describings everything from the binary system to electrical circuits, to gates to simple calculators, to memory, to a complete machine with a "control panel". But after that, the book started getting a LOT more broad (not necessarily a bad thing). It seems almost as if Petzold wanted to tell you everything about the world of computers, but couldn't fit it in a book such as this; so he dabbed a little here and there of a few terms, history, etc... (allowing you the option to look up anything you wanted if you had the interest).My oppinion is that the book is _great_ up to about the middle of the book, after which he just condenced all the rest of the information which would otherwise takes thousands of pages to describe in as much details as he described how to build a physical logic machine... I think that if someone isn't a "techie" or isn't in the computer field, they may have some hard time understanding a few minor points... but overall, this is a GREAT book.. one of a kind.Greatly recommended for everyone's library... I can honestly say, I always told people "a computer is nothing more than zero's and one's"... but until I read this book, I couldn't BUILD one... now I can (given time! :).P.S. This book is perfect for those who didn't necessarily go to college and learned everything on their own... it covers some CS, CE, and EE. Those who went to college with either of those majors probably learned the greatest part of this book... but it's a great review.

Wow. What a Book.

Published by Thriftbooks.com User , 21 years ago
Have you ever opened up the case of your PC, only to find that there are seemingly millions of lego-esque pieces stuck together? Have you ever wondered how computing went from the abacus to the Palm IV? Have you ever asked how the engineers are able to do the things they do?Well, ask no more. Instead, read this book. Charles Petzold is able to describe the workings of a simple computer, starting from the ground floor. He begins with descriptions of a simple circuit, and slowly works his way to more and more complex structures. You learn about flashlights, Morse code, and the early computers, and how each has impacted modern computing.Will this book teach you how to program? No. But if you were not a computer science major or electrical engineer in college, this book will lay some of the foundations for understanding this technology. The technical aspects get a little dense at times, but this did not detract from the impact of this book.If you have been curious about what goes on in that beige box, now is your time to investigate. This is the place to start.

Published by Thriftbooks.com User , 22 years ago
Charles Petzold a does an outstanding job of explaining the basic workings of a computer. His story begins with a description of various ways of coding information including Braille, Morse code, and binary code. He then describes the development of hardware beginning with a description of the development of telegraph and relays. This leads into the development of transistors and logic gates and switches. Boolean logic is described and numerous electrical circuits are diagramed showing the electrical implementation of Boolean logic. The book describes circuits to add and subtract binary numbers. The development of hexadecimal code is described. Memory circuits are assembled by stringing logic gates together. Two basic microprocessors are described - the Intel 8080 and the Motorola 6800. Machine language, assembly language, and some higher level software languages are covered. There is a chapter on operating systems. This book provides a very nice historical perspective on the development of computers. It is entertaining and only rarely bogs down in technical detail.

Published by Thriftbooks.com User , 22 years ago
I think that this is the best book that I have read all year. In some sense this is the book that I have been looking for for twenty-five years--the book that will enable me to understand how a computer does what it does. And--given the centrality of computers in our age--it has been a long wait. But now it is over. Charles Petzold (1999), Code: The Hidden Language of Computer Hardware and Software does a much better job than anything else I have ever seen in explaining computers--what they really are, and how they really work.Have you ever wondered just how your computers really work? I mean, really, really work. Not as in "an electrical signal from memory tells the processor the number to be added," but what the electrical signal is, and how it accomplishes the magic of switching on the circuits that add while switching off the other circuits that would do other things with the number. I have. I have wondered this a lot over the past decades.Yet somehow over the past several decades my hunger for an explanation has never been properly met. I have listened to people explain how two switches wired in series are an "AND"--only if both switches are closed will the lightbulb light. I have listened to people explain how IP is a packet-based communications protocol and TCP is a connection-based protocol yet the connection-based protocal can ride on top of the packet-based protocol. Somehow these explanations did not satisfy. One seemed like answering "how does a car work?" by telling how in the presence of oxygen carbon-hydrogen bonds are broken and carbon dioxide and water are created. The other seemed like anwering "how does a car work" by telling how if you step on the accelerator the car moves forward.Charles Petzold is different. He has hit the sweet spot exactly. Enough detail to satisfy anyone. Yet the detail is quickly built up as he ascends to higher and higher levels of explanation. It remains satisfying, but it also hangs together in a big picture.In fact, my only complaint is that the book isn't long enough. It is mostly a hardware book (unless you want to count Morse Code and the interpretation of flashing light bulbs as "software." By my count there are twenty chapters on hardware, and five on software. In my view only five chapters on software--one on ASCII, one on operating systems, one on floating-point arithmetic, one on high-level languages, and one on GUIs--is about ten too few. (Moreover, at one key place in his explanation (but only one) he waves his hands. He argues that it is possible to use the operation codes stored in memory to control which circuits in the processor are active. But he doesn't show how it is done.)Charles Petzold's explanatory strategy is to start with the telegraph: with how opening and closing a switch can send an electrical signal down a wire. And he wants to build up, step by step, from that point to end with our modern computers. At the end he hopes that the reader

Published by Thriftbooks.com User , 22 years ago
The average person who uses a computer to surf the web or type letters has so little knowledge of the underlying technology he or she is using that it may as well be magic. Even programmers, who typically spend their days solving problems with the high-end abstractedness of object-orientation, may be more than a little unclear about what's actually going on inside the box when their compiled code is running.Petzold attempts, and largely succeeds at, writing a book that leaves the reasonably intelligent layperson with a thorough comprehension of each layer that comprises a modern electronic computer (binary coding -> electronic representation -> transistors -> logic gates -> integrated circuits -> microprocessors -> opcodes -> assembly language -> high-level language -> applications). At times, the reader must follow along carefully, but Petzold tries to avoid needless complication. <p>Code is a well written and very entertaining explanation of the digital electronic technology that has become an integral part of our daily lives. Short of getting a degree in electrical engineering, this book is your best bet to understand how it works.
Trustpilot
Copyright © 2022 Thriftbooks.com Terms of Use | Privacy Policy | Do Not Sell or Share My Personal Information | Accessibility Statement
ThriftBooks® and the ThriftBooks® logo are registered trademarks of Thrift Books Global, LLC