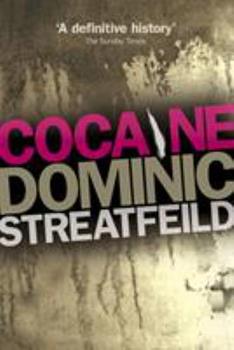 The story of cocaine isn't just about crime and profit; it's about psychoanalysis, about empire building, about exploitation, emancipation, and, ultimately, about power. To tell the story of the... This description may be from another edition of this product.

An interesting compendium of America and the world's most controversial drug

Published by Thriftbooks.com User , 16 years ago
Dominic Streatfield's "Cocaine" is illuminating and entertaining, even if it sometimes stalls. The book is, refreshingly, not a polemic, though it is obvious that Streatfield is in favor of legalization. This book is as much a powerful work of sociology, which gazes into the souls-won, lost and in limbo, affected by the drug. Appropriately, it is an indictment of the drug, as any book worth its weight must be, but the indictment is based on facts and shows the shallow tendency of American and European media to sensationalize and misinform the public about the drug. Definitely worth reading and considerably readable, Cocaine is a book that like its subject matter deserves a close examination.

Very Good both historically and anecdotally

Published by Thriftbooks.com User , 16 years ago
This book is a great read. It begins with the history of the South American natives chewing coca to sustain their high-altitude lives, and takes the reader all the way to George Jung (of the movie Blow) and Ricky Ross, the first ghetto entrepreneur of the product pop culture calls "crack." For anyone looking to know the whole story behind this powerful and culturally infecting substance, this is a great way to educate and entertain yourself. I read it almost cover-to-cover in three days.

Published by Thriftbooks.com User , 19 years ago
This is truly one of the finest books I have read in a long time. Streatfeild starts with the background of Cocaine, how it came in to existence in the western world, what it is, etc. For this he went to libraries and read books that haven't been read in decades about Cocaine. This part can be a little laborious, but very useful and helps you appreciate what cocaine is all about and how it is more complicated than a drug that is just evil. You use the background he gives when you get to the rest of the book where he goes in to how cocaine has basically shaped the entire political and economic part of Latin America. His stories about the smugglers kept me up all night, they were so interesting, informative and lively, even more so as they are true and really matter to millions of people. He actually talks to maney smugglers in America, Columbia, Bolivia and elsewhere. His research throughout is superb. He went to any length to get the real story. Great Job!

From coca leaves to cocaine powder to freebase

Published by Thriftbooks.com User , 20 years ago
Streatfield treats us to a well-researched saga of a nondescript plant turned worldwide scourge.The harmless looking coca plant was a staple of native South American societies for millennia. The continent's natives chewed a compound based on coca leaves to increase their endurance during long, trans-mountain treks; the chewing of which also reduced the food they would need on these grueling voyages. Coca, when taken in this manner, would provide a prolonged, but mild effect, in comparison with the 'high' that comes from the more pure forms of the substance that have been produced by modern science, medicine, and 'criminal enteprise'.Streatfield explores the newfound interest in the plant occasioned by medical research in the late 19th century, when many doctors and scientists, during the course of studying this remarkable drug, almost invariably found themselves 'addicted' to it. (Whether cocaine can truly be called 'addictive' is still a subject of debate and controversy. Opponents of the appellation 'addictive' emphasizing that cocaine, unlike drugs such as heroine and alcohol, does not produce withdrawal symptoms in the user who ceases its intake. This is anoverblown debate, unfortunately, as, like many high-profile debates in society, the point of contention is not substantive but semantic.)Streatfield documents the decline of cocaine use in the early to mid 20th century, and tracks its subsequent rise on the heels of the blossoming drug culture of the 1960's. One interesting point involves the attempted duplication, by an American distributor, of the smoked variety he sampled in a South American labaratory. Unawarre of the crude nature of the mixture, he set a scientist upon the task; and the result was not the comparably weak cocaine smoked in the remote laboratories, but the first ever purification of cocaine into freebase. This massively more potent form, together with the relatively short nature of the high, were to revolutionize the drug culture in America, especially in the inner cities.Most impressive about Streatfield's work, however, are the steps he takes to get firsthand knowledge, not only of the drug, but of the persons involved in the violent trafficking thereof. He visits and interviews many persons- law enforcement agents, imprisoned dealers, and even the armed compounds of wanted Colombian kingpins- putting himself in predicaments that have been the death of many before him.This book provides a wonderful history of the plant itself, and a tremendous survey of the politics, crime, and fortunes that have arisen alongside it in the last 40 years. Fascinating.

Published by Thriftbooks.com User , 20 years ago
Streatfield has written a very interesting account of the history of cocaine from its use in the Andes thousands of years ago to the present day. The book is full of information, stories, personal anecdotes, and legends all interwoven in a light-hearted and humourous style. He goes in depth into the impact of the drug trade on society and politics in a number of countries as well as providing a thorough review of how cocaine emerged on the European social scene in the late nineteenth century.He writes as a fascinated observer rather than as a historian - a style which takes a bit of getting used to but overall enhances the reader's enjoyment.You might not agree with all of Streatfield's opinions but it will give you a new perspective on the cocaine trade, its impact on America, and what can be done about it. The book is fascinating and an eye opener - worth picking up.
Trustpilot
Copyright © 2022 Thriftbooks.com Terms of Use | Privacy Policy | Do Not Sell My Personal Information | Accessibility Statement
ThriftBooks® and the ThriftBooks® logo are registered trademarks of Thrift Books Global, LLC