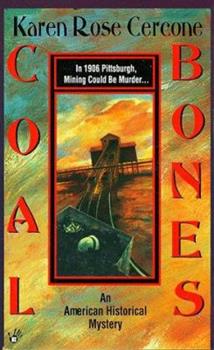 Karen Rose Cercone brings readers back to 1906 Pittsburgh, where a mysterious death in a coal mine involves Detective Milo Kachigan and reporter Helen Sorby in a case that pits big business, organized... This description may be from another edition of this product.

Best of the Series So Far

Published by Thriftbooks.com User , 21 years ago
In this third installment of Cercone's series set in 1905 Pittsburgh, and featuring Miles Kachigan, one of Pittsburgh's only honest cops, and Helen Sorby, a Settlement House worker. In this outing, we are taken to the coal mines where strikesare being called to try to improve working conditions. When a body is found deep in a mine shaft of an already-closed mine, County Detective Milo Kachigan is called to investigate the murder. The body, wedged behind some mine machinery, has a stiletto in its back indicating that the murder may have been committed by the Black Hand gang. However, Milo knows that it doesn't make sense that the Black Hand would murder someone in the mine. It is not their modus operandi. As he digs deeper, Kachigan discovers that there may have been blackmail, extortion, and all kinds of nefarious deeds going on. In the meantime, Helen Sorby has been asked to locate the daughter of a coal baron who disappeared at the same time valuable securities were stolen from her father. Is there a connection between Kachigan's case and the missing heiress? Sorby and Kachigan decide to combine forces to solve both mysteries.Cercone's debut, Steel Ashes, was a wonderful addition to the historical mystery genre. However, she stumbled a bit with the second book, Blood Tracks. But she is right back on track with this outing. Her writing is such that, as the characters descend into the mines, you can almost feel the weight of the earth closing in on you and feel the choking coal dust permeating your clothing and seeping into your lungs. In a neat role reversal, Kachigan wants to marry Sorby, but Sorby (who has been married before) refuses, but wants to sleep with Kachigan who is offended by the offer and refuses. There is more humor, albeit subtle, in this book as well. This is a real page turner and the reader will be hard pressed to set the book aside. Cercone deserves a large following for this series.

Published by Thriftbooks.com User , 23 years ago
Another wonderful book by Cercone. Although the relationship of Helen and Milo has taken a decided turn the mystery takes center stage. I can't wait for another chapter in this 'love' story and only hope that more are to come!

Great mystery in the coal mines

Published by Thriftbooks.com User , 23 years ago
Again, Ms. Cercone writes a captivating tale of murder and intrigue in the Pennsylvania coal mines. I had a hard time putting down the book once the action begins. True it's a grim book and some may be put off by the darkness of the times. But it's a pleasure to see Milo and Helen care for each other, even though sometimes you have to read between the lines. It would be nice to see their relationship develop more, it conter-acts the grimmness. Read the entire series, it's worth it.

Published by Thriftbooks.com User , 23 years ago
After having read Ms. Cercone's Steel Ashes and Blood Tracks, I was anxiously watching for her next release. Coal Bones did not disappoint! I enjoyed every minute of it. In fact, I finished it far too soon and now I'm left waiting for (hopefully) another book to continue the series. I really enjoy the way that Ms. Cercone has developed Milo Kachigan and Helen Sorby's relationship through the last three books. It's been a slow/natural progression that hasn't detracted from the great mysteries around which her books have revolved. I particularily liked the way that Coal Bones brought back some of the characters we got to know in Steel Ashes in such a way that you wouldn't have been lost if you missed her first book. Again she painted a very vivid picture of what life was like in the early 1900's in industrial America. It makes it easy to visualize what her characters are experiencing, from their physical environment to the social mores of their time. In conclusion, I just want to say that this was another marvelous book from Ms. Cercone; and to ask "When is the next one due out?"

Published by Thriftbooks.com User , 24 years ago
In 1906 Pennsylvania, the robber barons own the coalmines and railroads. They also control the law enforcement officials such as the County Detectives Bureau where corruption is rampant and the wealthy are assisted on their schemes. Detective Milo Kachigan is the rare honest cop. He is punished for his efforts by being transferred to the small town of Tarentun in the middle of coal country. Currently, the area is filled with conflict between union organizers trying to gain a toehold and owners wanting to maintain the status quo. Karen Rose Cercone paints a very gray picture of early twentieth century Pittsburgh and the surrounding towns at a time when unions are being formed and the women's movement is just beginning. The Faustian relationship between the law and the robber barons adds depth to the unusual, but grim imagery of a powerful story line. Milo and his girl friend add strength, compassion, and humor as well as insight into the socialist and suffragette movements. COAL BONES is a great work by a rising star.Harriet Klausner
Trustpilot
Copyright © 2022 Thriftbooks.com Terms of Use | Privacy Policy | Do Not Sell My Personal Information | Cookie Preferences | Accessibility Statement
ThriftBooks® and the ThriftBooks® logo are registered trademarks of Thrift Books Global, LLC