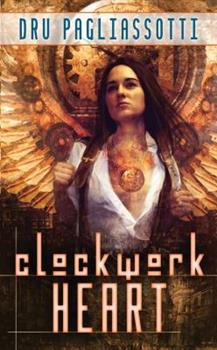 (Book #1 in the Clockwork Heart Series)

A steampunkish romantic fantasy set in Ondinium, a city that beats to the ticking of a clockwork heart. Taya, a metal-winged courier, can travel freely across the city's sectors and mingle indiscriminately among its castes. A daring mid-air rescue leads to involvement with two scions of an upperclass family and entanglement in a web of terrorism, loyalty, murder, and secrets.

Published by Thriftbooks.com User , 14 years ago
Taya is an icarus, a person who's managed to pass the tests to become a privileged, winged, message carrier. This gift allows her to transcend her country's closely regulated caste system. Citizens are tattooed according to class, the lowest working in the mines and factories, while the highest lead the Council. Above it all ticks the Great Engine, a massive machine programmed to guide and rule the people, from the number of widgets that should be made on a particular day, to the job a person is suited for. Taya, as an icarus, bears no tattoos and no responsibilities for the Great Engine's functioning until the day she saves the lives of two Exalted. Brothers Cristof and Alister Forlore belong to the Exalted class, a group of rulers revered and viewed as special because they've been perfected by the Lady through multiple reincarnations. When Taya saves their cousin's life, she is unwittingly drawn into the Forlore family's intricate world. Alister, a ladies' man and member of the ruling council, is instantly attracted to the petite muscle-bound icarus. And Taya, flattered, returns his flirtations. Cristof, who denied his class and instead chose a menial profession as a master Clock Wright, is everything his brother is not: plain-faced, rude, bossy, and anti-social, but analytical brilliance is something they both share. When political turmoil erupts in the form of sabotage and bombings, and the Great Engine's inner workings are threatened, Taya will have to decide who to trust. The Exalted, who in public hide their intentions and feelings beneath ivory masks and silken robes? The lictors, a form of police, who amongst other things, strictly enforce the caste system? Her fellow icarii, some whom are vocal dissenters of the current system, or the Great Engine's programmers themselves? I'll try not to spoil any of the story's many secrets. You'll have to read the book to see which of the brothers uses his mind and snags Taya for his own, but be prepared to be run through the emotional wringer. Treasured characters die. Political intrigue abounds. Even the secondary characters have lives of their own, right down to Jayce, a budding dressmaker, and Gwen, Taya's landlady and, for lack of a better term, dorm mistress. This book sat in my to-be-read pile far too long. I'm not typically a gushing reviewer, but if you enjoy fantasy and complex world building, Clockwork Heart is a book you cannot ignore. The cast of characters each have their own unique voices, flawless in their mannerisms and activities. The heroine never acts too stupid to live. The hero isn't a hastily sketched, oozingly sweet man, which makes it all the harder for the author to get the heroine (and reader) to fall in love with him. The plot is as intricate as a clock's inner workings, every nuance as carefully placed as a treasured pocket watch's gears. This book made me cry, smile, snicker, and cheer. Having a computer programming background only enhanced my reading pleasure. In a

Hooked Me From The Start

Published by Thriftbooks.com User , 14 years ago
While not a big "steampunk" fan, I met the author at her booksigning and figured I'd give CH a shot. The book hooked me from the opening with that wireferry accident. And the worldbuilding, imagery, solid pacing and character development kept me going. The romance/love triangle element was nicely underplayed, unlike a lot of "urban fantasy" books out there that are just Harlequin Romances with vampires or werewolves--this book is NOT one of those. It is a suspenseful read set in a fantastic (yet scientifically plausible) world where the main city is powered by a massive steam engine and Icarus Taya works as a flying courier who is drawn into political and class intrigue. The only "quibbles" I had were with the team of programmers who showed up later on--it took me a while to keep track of who was who. And the final showdown felt oddly overshadowed by the earlier, dramatic confrontation beteen the book's main characters (trying to stay spolier-free.) Despite those minor issues, I highly recommend this book to anyone interested in fantasy/steampunk. Eagerly waiting for the author's next book!

Published by Thriftbooks.com User , 14 years ago
This book was a delight, a very original theme with varied characters and an interesting plot. Our heroine, Taya, is an Icarus, a messenger who flies using special wings impregnated with Ondium to counteract her weight. The world of Ondinium is a semi-mediaeval many-layered one with different castes who live in different parts of the land with sometimes only an Icarus moving between them. When Taya rescues an Exalted, a member of the upper caste, from a damaged cablecar she finds herself mixing with other Exalteds, including the handsome and charming Alister Forlore, as well as his outcast clockmaker brother Cristof. However the accident to the cablecar appears not to have been an accident at all and when other sabotage takes place, and people start to die, Taya finds herself investigating with Cristof and some other people. Could there be a plot to damage the Great Engine, the mechanical computer that is at the heart of Ondinium? Can she trust those with whom she works? Can she keep her Icarus wings despite having to go against the rules and training? From the start of this book I was hooked, eagerly turning the pages to find out what happened next and to learn more about the interesting world. The terminology, much of it borrowed from Latin (Icarus, lictors etc), is never confusing, although I never quite got a handle on the various Engines and machines and how they worked. The cast of characters widens as the story progresses but it's easy to keep up with who is who and there are some nice touches of characterisation for some of these bit parts. My only reservation about the book is that I didn't always understand Alister's behaviour towards Taya on such a slight acquaintance but it was still an excellent read and I'll look out for other books by this author. Originally published for Curled Up With A Good Book © Helen Hancox 2008

Published by Thriftbooks.com User , 14 years ago
I *really* liked this book! Taya is an "Icarus" in the mountain city-state of Ondinium. Icari are sort of flying bike-messengers/mailmen/couriers for the city, but with a bit more social status than that implies in our world. Ondinium is apparently the only place in the world where the negative-weight, positive mass metal "Ondium" can be mined, though it is rare even there. An ondium armature negates enough weight that Icari can fly with metal wings. Taya is happy in her job, but yearns to pass her diplomatic exams and see the world as a (flying) diplomat for Ondinium. However, her life changes dramatically when she makes a daring rescue during a "wireferry" (the cable cars which connect the citys different peaks and neighborhoods) crash. Saving the life of an "Elite" woman and her child propels her into the affairs of the city's upper-crust and into the heart of the conspiracy that imperils it. I'm trying to figure out why I liked this book so well and I think there are several reasons: 1) The setting feels real and lived in. Now perhaps there are many elements that wouldn't make sense if I thought about them too hard, but nothing slapped me in the face and said "I'm here to challenge your suspension of disbelief!". Not only did it feel real, it felt like a place worth saving, and you could believe the loyalty the main characters felt for it. No one was blind to the problems of society, but they all felt they could be addressed in the society's own context. The police force was shown to be strict but fair, and not so bound by bureaucracy that they wouldn't deputize the citizenry when necessary. There was no real democracy, but different interests were represented on the council, and the press seemed to be completely free (if no more accurate than our own). Also there was broad sexual equality and a general lack of obsession with people's sleeping arrangements. There were obvious borrowings from Republican Rome, Victorian England, Mandarinism and Hinduism, but I felt they fell together well. 2) The characters were engaging. Taya is smart and ambitious, but no steely eyed hero. When circumstances force her to kill someone (a police officer who mistakenly believes she is trying to destroy the city's great babbage engine) in self defense, she feels terrible about it. She is also able to accept her eventual love interest for who he is without trying to polish all his rough edges. Said love interest is no "love at first sight" Mr. perfect either. In the "Night Huntress" books I just reviewed, there's an obvious "something" about the "fate-ed" lover from the get-go. Here it develops gradually. 3) The plot was interesting. The other "Juno" book I read recently, _Personal Demons_ was more Supernatural Romance, with the plot designed to bring the heroine and "hero" together. In _Clockwork Heart_, we get enough plot that it would work as a "buddy movie" even without the budding romance. I would really like to see some more books in

Published by Thriftbooks.com User , 14 years ago
If you like Urban Fantasies, you'll love this book even though it's a Fantasy. The heroine is decisive without being overbearing and obnoxious about it. The hero is not the standard pretty-boy Prince Charming. In a lot of ways, he seems to be unlikely until the inner qualities begin to be unwrapped one layer at a time. It's a cross-genre book; however, it's beautifully written, cleverly orchastrated, and so original as to set a new standard. Yes, the romance is there; however, it's very humanistic. This is not a book of casual lust that miraculously morphs into the forever kind of love. It's a book where the relationship is built one drop at a time, just like in real life. What makes this book truly shine is the depth of plot, artistic world-building, vivid characterization, and sheer premise originality. Kudos, Ms. Pagliassotti. Very well done.
Trustpilot
Copyright © 2022 Thriftbooks.com Terms of Use | Privacy Policy | Do Not Sell My Personal Information | Cookie Preferences | Accessibility Statement
ThriftBooks® and the ThriftBooks® logo are registered trademarks of Thrift Books Global, LLC