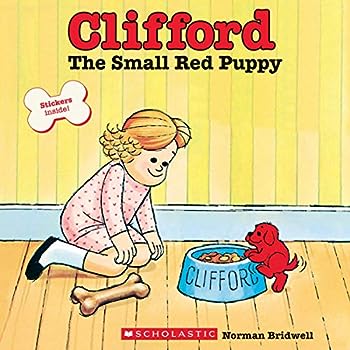 (Part of the Clifford the Big Red Dog Series)

This description may be from another edition of this product. Clifford wasn't always a big red dog. . . Clifford begins life as a very small, red puppy, but once he starts growing into a very large, red dog, there seems no limit to his potential size. Featuring...

"Grandma, was I ever that small?"

Published by Thriftbooks.com User , 13 years ago
This is a hilariously charming and educational story that tells about how Clifford, America's favorite Big Red Dog was once Clifford, The Small Red Puppy! Years ago, Clifford was adopted because he was the runt of the litter -- just so little and cute. But, he began to grow and grow to great big Clifford size, and the little girl had to adjust and learn to deal with those changes. There is so much for children to take away from this story about the responsibilities of having a pet, changes in family relationships and so much more. Because the book is so funny, the message is so much more palitable, and it will be easy for parents to open discussions. Excellent book with wonderful, eye-opening lessons.

Published by Thriftbooks.com User , 14 years ago
Like many parents, I have watched countless episodes of Clifford, the Big Red Dog. I never knew exactly how he got to be so big, until I read this book. Emily Elizabeth's love and concern over his well-being gives the little runt Clifford a whole new meaning for life. It is a metaphor of parents raising their own kids and that through kindness so much more can be achieved. The accompanying audio is a relaxing addition and especially valuable for expats such as myself who can no longer watch the show at will (imagine! I actually miss it!). I highly recommend this book as a bedtime read for kids -- a wonderful way to spend a few minutes of quiet time together. Christine Louise Hohlbaum, author of Diary of a Mother: Parenting Stories and Other Stuff and Sahm I Am: Tales of a Stay-at-Home Mom in Europe, lives near Munich, Germany, with her husband and two little Clifford fans.

Published by Thriftbooks.com User , 18 years ago
Clifford the small red puppy is a wonderful book. It's the story how Emile Elizabeth got Clifford the big red dog. When she first got Clifford he was the runt of the litter. Then Clifford started to grow and the story just goes on about how he grows. It's really a very good book. I liked the part where Clifford gets caught in Emile's back yard. This book couldn't really teach kids lessons but it could give kids a good time reading it or having it read to them. I think kids would really enjoy this book a lot. I think everyone who reads this should buy the book immediately, its that good. Clifford is a very cute red dog and everyone loves him.

Published by Thriftbooks.com User , 20 years ago
If you are like me, you love Clifford, the Big Red Dog. Do you know the story of how he came to live with Emily Elizabeth?One day, Emily Elizabeth's friend, Martha, got a new dog. She tells Emily Elizabeth all about finding the dog at the pet store. Then she asks how Emily Elizabeth acquired Clifford, the Big Red Dog."When I was little I lived in the city. I didn't have a dog." Then one day a neighbor's dog had puppies, and he offered Emily Elizabeth one. All of the puppies looked different from each other, and one was very tiny. The neighbor said to Emily Elizabeth, "Don't pick him. He's the runt. He'll always be small and sick." But Emily Elizabeth liked the idea of having a puppy who needed her. So she took the little red puppy, and named him Clifford.Clifford was so tiny that they couldn't find a collar small enough for him. He had to be fed with a doll's baby bottle. He would get lost in the house, sometimes even in Daddy's shoe! He would sleep in bed with Emily Elizabeth. One day, Mother noticed that he seemed bigger. So did Emily Elizabeth. The collar now was too small. He couldn't fit into the basket meant for sleeping. He returned to Emily Elizabeth's bed, but soon he took all the room!When they would walk, Clifford was bigger than even the big dogs. The neighbors began to notice how large Clifford was. Then the landlord complained. The police came and said Clifford would have to go. But they could not get him out, because he was bigger than the doors!Finally, a crane was able to lift him into a moving van that took Clifford to the country where Emily Elizabeth's uncle lived. Clifford and Emily Elizabeth really missed one another.Then, Daddy got a new job working with her uncle, and they all moved to the country. Emily Elizabeth and Clifford were reunited. Emily Elizabeth said, "Clifford, stop growing. You are just right."Then Emily Elizabeth politely asks Martha to tell about her dog again. Martha decides to change the subject. This book has many wonderful qualities. First, it addresses the issue of appearances being deceiving. Clifford looked like a runt, but became a giant. Second, it shows that potential can be much different from current reality. The exact nature of Clifford's great ability to be a rewarding dog is not apparent as a puppy. Third, children get a chance to realize that cute baby animals will not always be like that. Many children ask for a pet, and then will not take care of the pet when the baby animal becomes an adult. You can have more realistic conversations about your pet plans after reading this story. Fourth, it turns the idea of having an adult pet into an asset. Fifth, the story is told in such a way that your child will be laughing continuously. That will make it easier to remember the story, and will encourage learning to memorize the words. That is helpful in a beginning reader. Sixth, the story also encourages you to make the best of whatever comes your way. Althou

Published by Thriftbooks.com User , 21 years ago
When I was little, there was a shoe store that had this book. While my mother and the saleswoman put shoes on me, I would read it over and over and over. It fascinated me. I have been looking for this book for 12 years...I have finally found it again.This book had a huge impact on me. I'm sure it will have the same impact on your child.
Copyright © 2020 Thriftbooks.com Terms of Use | Privacy Policy | Do Not Sell My Personal Information | Accessibility Statement
ThriftBooks® and the ThriftBooks® logo are registered trademarks of Thrift Books Global, LLC