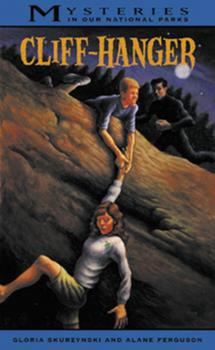 Cliff-Hanger (Mysteries in Our National Park)

(Book #3 in the Mysteries in Our National Parks Series)

This description may be from another edition of this product. When a cougar attacks a hiker in Mesa Verde National Park, the Landons have another mystery on their hands. Jack and Ashley are used to visiting parks with their wildlife veterinarian mother and...

Published by Thriftbooks.com User , 12 years ago
Cliffhanger by Gloria Skurzynski and Alane Ferguson is a great book for kids. Cliffhanger is about Jack Landon and his little sister Ashley. Their mom (Mrs.Ferguson) is a veterinarian who is called out to Mesa Verde because of a mountain lion attack on a hiker, when a foster girl named Lucky comes to them. Jack is mad at Lucky for intruding on there family vacation to Mesa Verde when he becomes friends with Lucky. The family gets to Mesa Verde but then Lucky starts to make a lot of mysterious phone calls. Everyone is trying to convince themselves that Lucky is not who she says she is and that she is a liar. That night lucky escapes the family to go with her dad. Cliffhanger has lots of adventure and real places. It is a great book for anybody who loves books with a lot of adventure in it. SW

Published by Thriftbooks.com User , 15 years ago
Cliff -Hanger I thought that the book was the best book i every read. IT kept making me think what was going t happen next. It kept making you want to read more and more. The story is about a boy named Jack , his sister Ashley ,and their parents Olivia and Steven. Their mom is a veterinarian and she goes to parks and help solve strange things that happen with the animals. Their dad is a professional photographer and he goes on trips with Olivia to take pictures. Their mom and dad are emergency care foster parents, so sometimes they take the foster kid on the trip with them. In this story they go to Mesa Verde National Park to solve the mystery of the cougar attacks. The day before they left they had to bring a foster kid named Lucky deal but Jack wants to trust her but he doesn't know if he can. I would recommend this book to someone around my age 10-12 or a person who likes mystery books. This book is also in a series of 7 other books

Published by Thriftbooks.com User , 16 years ago
Cliffhanger , by Gloria Skurzynshi , is a detailed and adventurous book. This is the story of a family who cares and appreciates wild animals. Jack, Ashley, and Lucky's mom is a vet who is responsible for taking care of animals. Their dad takes pictures of the wildlife to publish in magazines. The story takes place in Mesa Verda National Park in Colorado. At the beginning of the story they adopt a child. Her name is Lucky. Lucky and Jack develop a bond between each other while Ashley wonders about a wild animal that has been snooping around and an artifact that's been stolen. This book was an enjoyable read and I look forward to searching out other titles by this author. To find out how this story ends pick up a copy and read it.

Published by Thriftbooks.com User , 18 years ago
The name of the book I just read is Cliff-Hanger. It was exciting and mysterious. On a scale of one to ten I would give it a ten. In the book, the Landons get a strange new foster child named Lucky Deal,and the social worker,Mrs.Lopez, can't find out anything about her because Lucky won't tell them. Plus, Jack and Ashley Landon's mom,a wildlife veterinarian, is headed to Mesa Verde National Park to investigate why a crazy cougar who is attacking innocent people. If this sounds exciting you should read the book.

Published by Thriftbooks.com User , 21 years ago
This book was great! My favorite part was when the cougar came into the story. I read the book in one day because it was so good and I just couldn't stop reading! It was interesting to learn about the Hopi people and the way they lived. In this book I learned a lot about cougars and people who lived long ago. The book was exciting and full of suspence.
Copyright © 2020 Thriftbooks.com Terms of Use | Privacy Policy | Do Not Sell My Personal Information | Accessibility Statement
ThriftBooks® and the ThriftBooks® logo are registered trademarks of Thrift Books Global, LLC