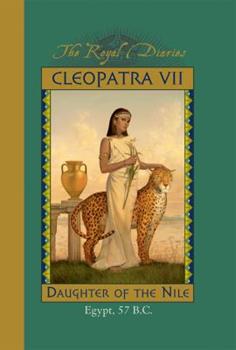 Cleopatra VII: Daughter of the Nile

(Part of the The Royal Diaries Series, My Royal Story Series, and Mon Histoire Series)

While her father is in hiding after attempts on his life, twelve- year-old Cleopatra records in her diary how she fears for her own safety and hopes to survive to become Queen of Egypt some day.

Published by Voiceman , 2 years ago
This story in diary format is very intriguing. You learn the story of Cleopatra along with the ways that ancient Egypt lived. Some things may shock you. History written in a way children will enjoy it. Very intriguing for sure!!

Published by Thriftbooks.com User , 16 years ago
As a HS parent, I seek the best in literature, either to read aloud to my children, or for their own reading pleasure. As we have been preparing for study of ancient Egypt, Greece, and Rome, I thought I'd try this book, as Cleopatra is such a seminal figure- both for her historical aspect, as well as the vast amount of literature, music, and drama based on her person. I was very pleased and fascinated by reading this book. The many and varied settings (Egypt, Rome, Italy) came to life for me, as I read of this small girl's attempts to prepare herself for ultimate Rule in Egypt. The author's inclusion of both a Greek philosopher and a Hebrew student in Alexandria (both very historically plausible) lent an element of connection to a worldview which was to come about- the Greco-Roman Christian- not 100 years after the events in this story. Because neither the story line, nor the facts of history, detracted from the validity (or, in some respects the inevitability) of the Christian Roman world that arose on the ashes of the Caesars, (yet including in her story Cicero, Julius Caesar, Marc Antony, and all the rest) I was propelled to finish reading this book. The author deals with the emotions of an adolescent girl, while maintaining decorum about such things, that any HS parent with moral standards could easily integrate this novel into any Greco-Roman study, for elementary on up to Jr. high. There are some graphic elements (Cleopatra's usurpacious sister's head being brought in on a shield, reminiscent of John the Baptist's via Salome!) but overall, the book is full of light- as well as intrigue, sense impressions of a culture long gone, and a good story. The fact that `it ends suddenly,' as another reviewer mentioned, is that the purpose for which the book was written is fulfilled. Cleopatra returns to her beloved Alexandria, there to begin her journey towards womanhood- and rule. Highly recommended.

Cleopatra : Daughter of the Nile

Published by Thriftbooks.com User , 22 years ago
Although I'm not too sure about the historical accuracy of this book, I still think it deserves five stars for being extremely realistic-sounding and well-written. Cleopatra is a twelve-year-old princess when she begins to write in her diary. Her formerly comfortable life is in a state of upheaval. Her father, the Pharaoh of Egypt, has disappeared after narrowly escaping several plots to asassinate him, and her older sister Tryphaena has usurped the throne in his absence. Tryphaena fears that Cleopatra could be a threat to her authority, so she is especially watchful of her younger sister. One misstep could lead to Cleopatra's death. Cleopatra seeths under Tryphaena's close scrutiny, but she also fears for her life. She knows that it is her destiny to become Queen of Egypt, but she does not know how she will ever be anointed with her power-hungry siblings in her way. In the midst of Tryphaena's takeover of the government, Cleopatra hears that her father is about to make an ardurous sea voyage to Rome to meet with Julias Caesar. He hopes to persuade Caesar to help him recover his throne. Cleopatra fears for her father's life, and she has also been informed that Tryphaena was planning to murder her on a certain night. So, with the help of her friends Olympus (a medical student and family friend), Theophilus (a Hebrew scholar), and others, she manages to sneak aboard her father's ship and sail to Rome. To find out the surprising and interesting things that happen to her in Rome, you must read this book. It is also in Rome that Cleopatra becomes more and more set on becoming Queen--no matter what the cost. This book centers around the preteen and early teenage years of Cleopatra's life--when she realizes how dangerous being the daughter of the Pharaoh is. She also learns that she can never know who to trust. In this book, Cleopatra also sows the seeds of her famous liaisons with Marc Anthony, a Roman general. I strongly recommend this book, as it portrays the dangers and privileges of being a princess more accurately than any other book in the Royal Diaries series.

I LOVE this book!

Published by Thriftbooks.com User , 22 years ago
This is the best Royal Diary yet. I'm 13 and I love it! It keeps you interested right from the beginning, something that the other books did not do. (And I don't even like Egyptian stuff!)It begins with Cleopatra musing about what will happen if her father (Ptolemy XII, who is in hiding) does not return and her older sister Tryphaena becomes queen. Then, Cleopatra could be killed, because she knows that Tryphaena hates her. Soon, Cleopatra's loyal friend Olympus warns her of the danger that will come upon both father and daughter if they stay in Alexandria (their "hometown"), because already, Tryphaena is planning to kill them. When her father secretly returns, the two set off for Rome. While they are there, Cleopatra meets Marc Antony, and while she does not like him she keeps having a longing to see more of him. And then comes the news that Tryphaena is dead - and now another sister, Berenice, has taken the throne. Will the king and Cleopatra be safe? Even though there is some really gory stuff in this book, it's excellent. Two thumbs way, way up!

Published by Thriftbooks.com User , 23 years ago
This book was a fictional diary of Cleopatra from when she was twelve to fourteen, from 57-55 B.C. It gave an interesting portrait of life during this time in Egypt and Rome and I highly reccomend it.
Trustpilot
Copyright © 2022 Thriftbooks.com Terms of Use | Privacy Policy | Do Not Sell My Personal Information | Cookie Preferences | Accessibility Statement
ThriftBooks® and the ThriftBooks® logo are registered trademarks of Thrift Books Global, LLC