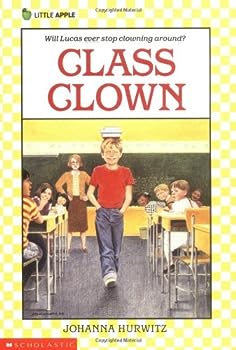 (Part of the Class Clown Series)

This description may be from another edition of this product. Lucas Cott is one of the smartest kids in Mrs. Hockaday's third grade -- but he is also the most rambunctious. Lucas doesn't mean to be the class clown, so he promises to try to behave, even though it...

This was a HILARIOUS book!

Published by Thriftbooks.com User , 21 years ago
I am a 9 year old girl that really enjoyed your book Class Clown. I especially like when Mrs Hochaday was handing out awards and Lucas Cott didn't care if he didn't get a pencil that was half red and half blue. Then when he got an award for the best improved conduct at the end of the year he really did care he that he received the red and blue pencils. I wanted to tell everyone how good your book the Class Clown is. I give it a 5 out of 5 stars for being so funny

Published by Thriftbooks.com User , 21 years ago
In the book Class Clown, Lucas's problem was he could not stop clowning arond.To prove this an event was during the cultrul arts program he stuck his head in the back rest of a chair and got stuck.I lked the book because it was real life full of tuching and funny events.Also Class Clown always had something exiting going on for example Lucas became ring master of the third grade circus.

Class Clown is a great book

Published by Thriftbooks.com User , 22 years ago
I really enjoyed Class Clown. It was about a third grade boy named Lucas Cott. His teacher was Mrs Hocaday. Lucas Cott was a very noisey boy according to Mrs Hocaday. Lucas Cott was a boy that always got into trouble with his teacher. He was in trouble almost everyday.One day his mother has a talk with him.She says to turn over a new leaf. So, Lucas trys to be better by not yelling out without raising his hand. By doing his homework, and to listen in class. Lucas is getting a little better . Somrtimes he slips up by yelling out. One day Mrs Hocaday decides to do a scool play. They decided to do a circus which was Lucas's idea.When Mrs hocaday asigned parts Lucas was a clown. He didnt want to be a clown he wanted to be the ringmaster.Will he be able to switch? Read this book and find out. Here is another mystery. Mrs Hocaday is handing out prizes will Lucas Cott get one? To find out both of these mysteries read this book Class Clown by Johanna Hurwitz. If I were you I would read this book . It is a great book.
Copyright © 2020 Thriftbooks.com Terms of Use | Privacy Policy | Do Not Sell My Personal Information | Accessibility Statement
ThriftBooks® and the ThriftBooks® logo are registered trademarks of Thrift Books Global, LLC