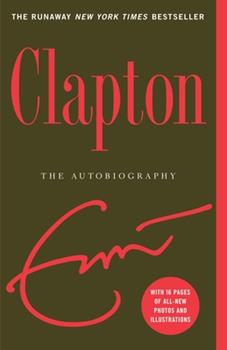 With striking intimacy and candor, Eric Clapton tells the story of his eventful and inspiring life in this poignant and honest autobiography. More than a rock star, Eric Clapton is an icon, a living embodiment of the history of rock music. Well known for his reserve in a profession marked by self-promotion, flamboyance, and spin, he now chronicles, for the first time, his remarkable personal and professional journeys. Born illegitimate in 1945 and...

Published by Monica , 1 year ago
My husband loves this book. Very good condition.

Published by Kathy , 2 years ago
Wow. Eric Clapton was always one of my favorites, his presence, mellow voice and his talent with a guitar. This book starts with the childhood of a broken soul. It was written with truth and honesty which at times is quite disturbing. I was at least halfway through the book before I could even like the guy. Selfish, arrogant, manipulative and without even a miniscule of respect for women...even those he professed to love. As his story developed and you watched his struggle to be healthy both physically and mentally ...the defeat and success...it pulled you in. He did the tough work to be drug and alcohol free and he has helped and supported many people who came after him. Kudos to him for that. I'm not really sure why he's still alive. By the end, I've come full circle. He's one of my favorites but for entirely different reasons. A good read.

Published by Thriftbooks.com User , 14 years ago
Highly Recommended for the musician and nonmusician alike. It's nice to hear the story from the source, in their own words. Clapton is exceptionally truthful and totally upfront in his efforts are telling you who he is and what he's about. As a teenager, I totally worshipped Clapton and Hendrix, the Beatles and the 'Stones. Therefore, you develop in your mind a perception of what their like based on stories that you've read and heard. CLAPTON, the biography has totally blown my perception of him as a person away. For years I have held him on a pedastel CLAPTON's story tells otherwise of a person only being too human like everyone else. His upbringing which was and is very unusual ultimately shaped him as he grew into a young man and now into a fullgrown adult. You must read Patti Boyd's bio because it corresponds totally with his and validates his bio here. I was quite taken aback at how rotten he treated Patti and used other women in his life. He admits that he has done this, maybe not as a conscious move but one spurred on by alcohol and drugs. Yes, he too was a product of his age...the age ('60s and 70's) of drug and alcohol excess. You get to learn of his family, daughter and son and as well his other relationships. Clapton has come full circle from his humble beginnings to king-like status back to humility and acknowledgement of his own faults. This is a great read, but again, you should read Patti Boyd's bio to get a full "picture" of what the age of aquarius was like. I recommend this book.

Published by Thriftbooks.com User , 15 years ago
I was pleasantly surprised that Clapton wrote as well as he did. With all of the D & D he did it is a miracle that he's still alive. Enjoyed it! If you lived through the 70's add another star!

still don't know what to say, but will try...

Published by Thriftbooks.com User , 15 years ago
Been a week since I finished this and I'm still not sure what to make of it. It's extremely well written, and if Eric really wrote this without a lot of professional help, I'm seriously impressed. But it's almost too well written, too slick, too tidy. I guess everyone has to find a way to rationalize their life's mistakes or they'd go crazy. And that's what Eric is doing in this book. He does it so well that (just like in his old TV interviews), in spite of his amazingly bad behavior, he comes out sounding like such a nice gentleman. That's why I'm still not sure what to make of it. I feel like I've been conned and I can't even tell how. Having just finished Pattie Boyd's book, I found it entertaining to compare stories that overlapped. Surreal. Psychologists could hold year long classes using these two books as texts; the punchline would be that there can never be objective truth. What isn't clear is if there are still blatent lies. The most noteworthy example is Pattie versus Eric's version of Eric's first meeting with Pattie's sister, Jenny, George's negative reaction to it, and why George reacted negatively. It's worth getting your hands on both books just to compare the two versions of this one story. But I'll warn you, not only will you never learn the truth, you will also have to settle for one of two depressing realizations: either one cultural icon is incredibly cruel, or another was incredibly immoral. These books are valuable historical documents because these are our cultural heros. How odd.

Published by Thriftbooks.com User , 15 years ago
Truly inspirational, completely candid, raw emotion, a history of rock and roll, were all the things I felt when I closed Eric Clapton's autobiography. It's the best autobiography I've ever read. I'm a huge fan of his, and I was aware of his story, having heard some of his interviews along the way, but in no way was I prepared for the depth and breadth of his candor and his ability to look within himself in writing about his own life's story, from his devastating childhood, his musical legacy, through his tormented years of addiction and bad relationships, and now he's found peace with his wonderful, loving family life. But, the part that was most moving for me is the way in which he finally recovered, falling down on his knees in prayer, as he does every day, in order to keep sober. He has given back to those in need in many ways, one of the finest being his Crossroads Centre in Antigua for recovery from alcohol addiction. I know that his story will help inspire and lead the way for many people recovering from pain in their lives because of his courage. I have read countless autobiographies, but I have never found one that I felt was more candid and from the heart, with raw emotional honesty. This book is one of his finest works ever.

The intriguing story of a rock legend

Published by Thriftbooks.com User , 15 years ago
The rock legend and great guitar player tells his own life story in this new book. He writes with passion and tremendous honesty. He seems to hold nothing back. He also writes with much wit and charm. Eric Clapton is a living legend, of course. He is considered by some to be the most influential guitarist in the history of rock. He chronicles his rise in the music world from his time with the Yardbirds to a short run with the Bluesbreakers. He writes about running around with Jimi Hendrix and Bob Dylan. He also talks about the Stones and the Beatles. He discusses how he finds his way to working as a solo artist in this very rough field that only celebrates the best and brightest. But there is a good deal of personal information here too. It's not all about his work. Though that's fascinating. He discusses in candor his drug-taking and hard-drinking years and then his eventual, hard-won recovery. He talks about his failed marriage to George Harrison's ex-wife Pattie Boyd and the accidental death of his four-year-old son, which had a crushing effect on him, as one can only imagine. I was struck by his candor and brutal honesty in this book. But perhaps one shouldn't be surprised, as he's always been one of the few really honest people in his profession. This book is a rare glimpse of a real cultural icon. You'll get a close-up look at this man in a way few autobiographies provide. Highly recommended.
Trustpilot
Copyright © 2022 Thriftbooks.com Terms of Use | Privacy Policy | Do Not Sell or Share My Personal Information | Accessibility Statement
ThriftBooks® and the ThriftBooks® logo are registered trademarks of Thrift Books Global, LLC