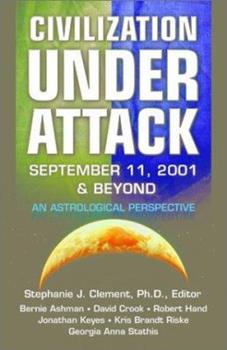 Making Sense of the Events That Changed Our World ""Our book takes the one factor that is starkly and clearly known-the exact time of the September 11 attack-and applies the one science that can analyze time to bring understanding about the antecedents of the event, about the people involved in carrying it out, and the forecast helpful to the decisions that must be made." "-Carl Llewellyn Weschcke, Publisher On September 11, 2001, our world was forever...

Just Enough Cooks for this Broth

Published by Thriftbooks.com User , 19 years ago
Explore these powerful astrological evaluations of the causes and effects of the September 11th attacks. With a selection of readings from popular astrologers such as Robert Hand and Jonathan Keyes, you'll have the opportunity to look at these events from several perspectives. How were the charts of George W. Bush and the United States itself, impacted? What were the economic influences involved? I particularly enjoyed the fact that every perspective wasn't devoted to the USA, corporate, we are the chosen children of capitalism viewpoint. Instead, we're treated to far more objective looks at the events (and the provocations) which led up to them.Finally, we're shown a glimpse of what is to come. Offering some astrological probabilities of upcoming aspects, we are invited to see fresh possibilities and insights. I enjoyed this book far more than I usually do, when several astrologers get together and caucus over the same bit of information. The repetition we may see only serves to reinforce particular ideas and the articles are woven together into a seamless and unified whole.

Published by Thriftbooks.com User , 19 years ago
This work is a terrific resource for anyone interested in understanding not only the astrological correspondences to 9/11/01, but also the implications for the economy and for the collective psyche. Essays are written by top-notch astrologers and are accompanied by maps and charts for illustration. Well worth reading!

Published by Thriftbooks.com User , 19 years ago
The nature of the subject and the writing quality of the seven astrologers involved (the most famous being Robert Hand) make this a very unusual book. A very, very, very broad range of astrological and non-astrological perspectives are very carefully covered in this assessment of the terrorist attacks on America and some of the possible implications for all of us. Astrologically the main emphasis is on interpretations of the charts of the events in September, together with related charts such as those of the United States, George W. Bush and, to some extent, Osama Bin Laden. Many other charts are also considered such as the World Trade Centre bombing in 1993 and the national chart for Israel. Interpretations of the Saturn-Pluto opposition transit through 2001 and 2002 receive particular attention throughout the book. The astrology is continually placed in a broad context, with extensive considerations of the historical, political, and economical background to the attacks, together with similar perspectives on the consequences. Many questions are asked. Did the perpetrators use astrology? Did the terrorists intend to crash into the White House? Where do we go from here? Very occasionally some of the views appear rather fanciful, but overall this is superb stuff that does intelligent justice to modern astrology.

Published by Thriftbooks.com User , 20 years ago
As I am sure with most folks, I felt a strong need to look for answers after 9/11. I have always looked to astrology as a focusing point in my life, to get guidance and answers, and was delighted to find a book with an astrological perspective on the tragic events of that day. It is written in a not too techinical way, very professionally done. The authors obviously are experts in their field. It looks at the major players, the city of NEw York, the Trade Towers, Bin Ladin, Rudy Giuliani, and analyzes their charts, and most importantly the interaction of their charts that lead up to the tragic events. To summarize, I found this book extremely helpful on a number of levels.

Astrology for the Non-Astrologer

Published by Thriftbooks.com User , 20 years ago
Civilization Under Attack does two things for the reader: it reviews many of the current events issues around the September 11, 2001 attacks, and it tells how astrologers view these events. The big thing here is that the book is not written in complicated astrological language - that information is found in footnotes.The book includes a chapter on the psychology of terrorism that explains how the perpetrators tend to think differently from the rest of us. It also has chapters about many of the key political players, like George W. Bush, Osama Bin Laden, Colin Powell and others.There are lots of questions about the plane that crashed in Pennsylvania. This book considers the question of what the actual target was and why that plane did not reach its target. Another chapter answers this question by treating the events as "twin" events. There are the "twin" towers and the planes that hit them, as well as the other two planes. This chapter explains a lot about how astrology looks at event charts.Something not found in any other books that I know of is the information about Arabic astrology and how it can be used to understand these events. In contrast to that, there is a whole section on forecasting what will happen in terms of the war on terrorism, the economy, and international politics. There is also an explanation of how astrologers determine where an event may take place, along with the honest statement that no one could have predicted this precise event because it was inconceivable.All in all, Civilization Under Attack provides the information we all need to understand these tragic events and to explore what the future may bring.
Copyright © 2022 Thriftbooks.com Terms of Use | Privacy Policy | Do Not Sell My Personal Information | Accessibility Statement
ThriftBooks® and the ThriftBooks® logo are registered trademarks of Thrift Books Global, LLC