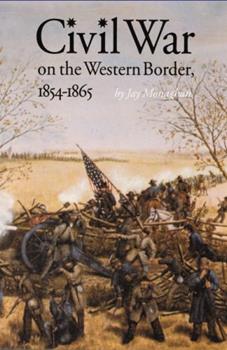 The first phase of the Civil War was fought west of the Mississippi River at least six years before the attack on Fort Sumter. Starting with the passage of the Kansas-Nebraska Act in 1854, Jay Monaghan traces the development of the conflict between the pro-slavery elements from Missouri and the New England abolitionists who migrated to Kansas. "Bleeding Kansas" provided a preview of the greater national struggle to come. The author allows a new look...

Published by Thriftbooks.com User , 19 years ago
This book explains very well why there was so much violence in the Western scenario. If you like, it also explains the violence following the civil war in the reconstruction era. If you are used to draw a gun whenever you see a political opponent one should not be surprised about the cruelties committed by the Klan after the war.This book also shows the problematic stand the civilized (Indian) nations were confronted with, being forced to choose between Union or Confederacy.To all Southerners, this is a ballanced account descibing that particular period of time. Buy it.

Never Let Me Down

Published by Thriftbooks.com User , 21 years ago
A very well written book on the history of the Civil war west of the Mississippi. Monaghan covers many of the battles I had tried in vain to locate details on. Covered are the battles of: Carthage, Wilson's Creek, Pea Ridge, Prairie Grove, and Westport. I especially found interesting the involvement of the Five Nations out of Oklahoma. Much is covered concerning the conflicts between Kansas and Missouri, but Texas, Arkansas and others are treated with some detail. Monaghan's writing style is excellent, giving you a good feeling for what happened. You will read and re-read this one.

Published by Thriftbooks.com User , 21 years ago
Fanatical politics of the western frontier, immigrant abolitionists with loaded Spencer rifles funded by mysterious personages back East, cut-throats, gin heads and horse thieves, colorful character descriptions... This book ranks up there with Pea Ridge by Shea and The Civil War by Foote. Absoltuley a must read.
Copyright © 2020 Thriftbooks.com Terms of Use | Privacy Policy | Do Not Sell My Personal Information | Accessibility Statement
ThriftBooks® and the ThriftBooks® logo are registered trademarks of Thrift Books Global, LLC