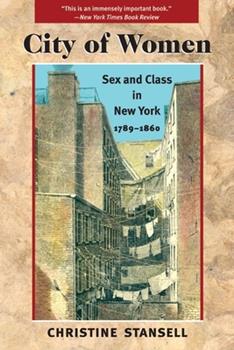 Before the Civil War, a new idea of womanhood took shape in America in general and in the Northeast in particular. Women of the propertied classes assumed the mantle of moral guardians of their families and the nation. Laboring women, by contrast, continued to suffer from the oppressions of sex and class. In fact, their very existence troubled their more prosperous sisters, for the impoverished female worker violated dearly held genteel precepts of...

Published by Thriftbooks.com User , 13 years ago
Best way to buy college textbooks! This vendors product was right on the money and I can't believe I haven't been buying my books like this all along.

A History of Survival

Published by Thriftbooks.com User , 20 years ago
During the early part of the nineteenth century, women began to experience their first taste of autonomy. Although women were finding a role in the American workplace and society there were not many options for them. As part of the struggle to escape poverty in New York City, prostitution became an increasingly viable choice for girls with out other alternatives. Historian Christine Stansell states, "It was both an economic and a social option, a means of self-support and a way to bargain with men in a situation where a living wage was hard to come by, and holding one's own in heterosexual relations was difficult." This book deals with women in the factories as well as the working girls. Easy to read and very informative.

An illuinating look into the lives of working women of NYC.

Published by Thriftbooks.com User , 23 years ago
Chritine Stansell has captured and vividly illuminated the lives of working women of the Industrial Revolution in NYC. I have studied this book for two classes and am sorry that I had not come across it sooner. If you are interested in the youth culture and the ways that a culture of single women emerged, this is a great book. If you are interested in the ways that working women handled themselves against the burden of the middle class genteel precepts, read this book. If you want a factual yet compelling picture of a history of women that is free from bias, check this out! City of Women details the lives of these women in a way that empowers and reveals truths that have long been hidden from America's full historical picture.
Trustpilot
Copyright © 2022 Thriftbooks.com Terms of Use | Privacy Policy | Do Not Sell My Personal Information | Cookie Preferences | Accessibility Statement
ThriftBooks® and the ThriftBooks® logo are registered trademarks of Thrift Books Global, LLC