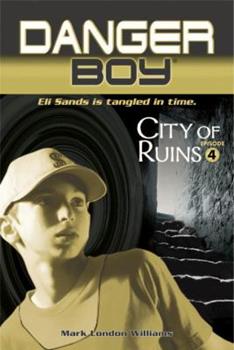 (Book #4 in the Danger Boy Series)

American Rendering showcases twenty-four new poems as well as a generous selection from Andrew Hudgins's six previous volumes, spanning a distinguished career of more than twenty-five years. Hudgins, who was born in Texas and spent most of his childhood in the South, is a lively and prolific poet who draws on his vivid Southern and,more specifically, Southern Baptist, childhood. Influenced by writers such as John Crowe Ransom,William Faulkner, Flannery...

Published by Thriftbooks.com User , 14 years ago
CITY OF RUINS is the fourth book of the Danger Boy series. The main character, Eli, is imprisoned by the Defense Advanced Research Projects Agency or D.A.R.P.A. for short. He was imprisoned along with his friends Clyne and Thea. D.A.R.P.A. uses time travel as a weapon. Thea has symptoms slow pox, which is a disease that slowly dissolves your nervous system and turns you into mush. In order to find the cure, Eli time travels to ancient Jerusalem where he meets an unexpected enemy and one angry mob. This book is great for anyone who loves history and adventure.

Published by Thriftbooks.com User , 14 years ago
Seldom do authors write about themes that are central to Judaism in young adult science fiction. However, this series is an exception. Using time travel as a vehicle, the author illustrates how one person's deeds can change the world. In this book, the main characters fight evil and try to correct the mistakes of history. The author takes us on an adventure where the three main characters -- Eli, Thea and Clyne -- time travel to 583 BC. At the start of the book, they are all in jail because the government thinks they are spies. However, when Thea contracts slow pox and the disease endangers the entire populace, the government lets Eli and Thea time travel to Jerusalem (where the disease originated) to find a cure. In addition to a slow pox outbreak, Jerusalem is experiencing great upheaval during this period. The city and the Temple have been destroyed and the people are bereft, fearful and angry. The story focuses on the ways in which the main characters address these problems and cope with Thea's disease. In addition to the exciting plot, the author uses many other science fiction devices that young people will enjoy. They will watch the characters simultaneously translate languages that are not their own and experience creative ways to time travel. Additionally, students will see the negatives of traveling through time--loss of friends, loss of family, and loss of home. Not only does this book show how one person"s actions can be transformative, but it also lets a young reader learn about history in a dramatic and exciting way. For ages 11-13. Reviewed by Marge Kaplan

Published by Thriftbooks.com User , 14 years ago
Eli Sands, aka Danger Boy, is able to time-travel by virtue of his unique molecular structure and critically important baseball cap. His friends are Clyne, an intelligent dinosaur from a different planet (ridiculously funny in a Jar-Jar sort of way), and the lovely Thea, from ancient Alexandria. Instant translator lingo-spots in their heads enable characters to understand those who do not share the same language, which is especially helpful when they get to the City of Jerusalem, year 583 B.C.E. The chapters are narrated by the three friends from different time periods and locations where they happen to be at the moment. Due to a lot of secrecy and espionage, it is difficult for the friends to discern who the bad guys are, which may or may not include the government, characters from the last book, and even Eli's parents. Getting separated and lost in time is only slightly less angstful for Eli compared to other things on his mind, such as, 'should he be liking Thea (age 14 to his 13) as a girlfriend'? This is a wildly creative work, and the reader will note with keen interest at how the author keeps this fascinating story together and running. Even with many references to episodes from the previous three books, there is no humdrum here. Readers get a large slice of history and they won't flinch a bit. In fact, they'll be looking for more. A molding of fantasy, historical and science fiction, you'll want to recommend this one, especially for the boys.

Published by Thriftbooks.com User , 15 years ago
It's the year 2020 and Eli Sands is being held captive by DARPA (Defense Advanced Research Projects Agency), the people who pushed him into this whole Danger Boy, time-travel thing to begin with. They claim to be studying him to find out what it is about his bio-mechanical structure that gives him the ability to travel through time unharmed. But, that's about all they'll tell him, and it's the least of his concerns. Eli has many more important questions, like where are they keeping his friends? Thea, a human girl from far in the past, and Cline, a highly evolved dragon-like creature from a completely different time and place, have become Eli's time-travel companions. Eli doesn't like being apart from the "family" they have created. Speaking of family, where is Eli's mother? He hasn't seen her since they all accidentally ended up in the 1960's. If DARPA can keep track of him, why can't they seem to locate his mom? And how about his dad? Isn't he supposed to be working for them? The only personal contact Eli has is with the DARPA agents, and he only knows them by number, not even their code names, much less their real names! When the alarm goes off and Eli is deserted, he sees an opportunity that he can't pass up. He escapes his prison and wanders through the DARPA tunnels in search of his friends, and maybe some answers. Finding his friends proves to be the easy part, and raises more questions than answers. Cline mysteriously appears in another set of rooms. Rooms that somehow duplicate the rooms that Eli lived in with his parents when they started their time-travel experiments. How did these things get here? Who would want to replicate Eli's home? Why? Thea is being interrogated elsewhere by the same DARPA agents that were testing Eli. But Thea seems to be not right somehow. Eli is sure she has the deadly slow pox that has been infecting the public and forcing quarantines all over the world. 30, a head DARPA agent, explains that the slow pox epidemic was created by DARPA to control people. The only people infected are the ones they infected on purpose, and Thea was not chosen for that. But then why is she sick? It turns out that DARPA's effort to control everything is causing it all to fall apart. The harder they try to contain everything and everyone, the more everything spirals out of control. And now they need Eli's help. But why should he help the people who held him hostage, who kept him from his father, lost Cline to a traveling freak show, and created a disease that mutated and infected Thea and is now incurable? He shouldn't. But he will. Because he might be able to fix all of this, repair the damage that time-travel has created in history, find his mom, locate Cline, and, hopefully, save Thea. In order to do any of that, he'll have to travel back to biblical times, to a Jerusalem destroyed by war and unwelcoming to strangers. A place far in the past where Eli finds a strange array of friends and enemie

Published by Thriftbooks.com User , 15 years ago
I really enjoyed this! I own every one of the books in this series (City of Ruins is #4 and I always look forward to each new installment) and I feel they're consistently exciting, creative and engaging; City of Ruins is no exception. The author speaks to young audiences in a distinct & accessible (for YA readers as well as appreciative adults) narrative voice, and this book (like all the others) is involving, well-plotted and a great way for older kids (and even adults such as me) to learn about history and significant moments IN history, as well as geography. Besides, what kid wouldn't want to be exactly like Eli Sands, the intrepid Time Traveler who gets to bounce around through time this way? He's a great character for kids to live vicariously through, and he gets a cool set of friends to join in his adventures as well. As a former teacher, I think older kids will be able to lose themselves completely in any of these stories and identify with the characters; my favorite is still Clyne, the dinosaur (who briefly spends time with a carnival). I loved him from his appearance in the first book--and I'm still waiting for a "stuffed Clyne" doll to emerge on the shelves someday (fingers crossed)!!! I hope the series is picked up and turned into a movie; it should be. A quick, easy & pleasurable read (as the author writes more, the books get thicker--and the stories get better). For YA fantasy/fiction, I highly recommend taking a peek.
Trustpilot
Copyright © 2022 Thriftbooks.com Terms of Use | Privacy Policy | Do Not Sell My Personal Information | Cookie Preferences | Accessibility Statement
ThriftBooks® and the ThriftBooks® logo are registered trademarks of Thrift Books Global, LLC