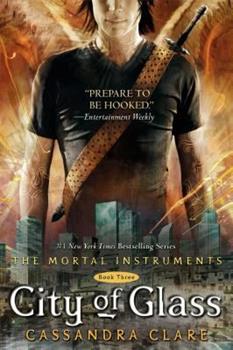 Love is a mortal sin, and the secrets of the past are deadly. Plunge into the third installment in the internationally bestselling Mortal Instruments series and "prepare to be hooked" ( Entertainment Weekly ). To save her mother's life, Clary must travel to the City of Glass, the ancestral home of the Shadowhunters--never mind that entering the city without permission is against the Law, and breaking the Law could mean death. To make things worse,...

Not the one I wanted. I wanted the one the picture shows and I got a different version.

Published by Smunoz , 8 months ago
Not ordering from this series again.

Have yet to read; happy with shipping and condition

Published by Dw018 , 1 year ago
Received my order much faster than expected, the book is in great condition. Very excited to have added it to my collection

Condition not as advertised!

Should be in english

Published by Diannabeddoe@yahoo.com , 2 years ago
Can not dead spanish

Published by Eris , 2 years ago
Finally glad the incest is resolved!

You won’t be disappointed!

Published by Jeanie , 2 years ago
This book was great! Character development is happening for a lot of them starting in this one as they find themselves and where they belong in the new world.

City of Glass is third book in series I am reading. I have received 4th book but not 3rd. I would

Published by Unsatisfied customer , 3 years ago
I ordered a hardcover to go with my series and received a paperback. My collection isn’t complete now. I wasted money

Good book, but some discrepancies

Published by Thriftbooks.com User , 12 years ago
I just finished the third book of the Mortal Instruments, City of Glass. I really liked this book a lot, it kept me enthralled in it the whole time. I really like how all the books were so intricately woven together that you didn't really catch what was going to happen until it did, but looking back there were always clues woven in so subtly that you still were surprised. ***Spoiler warning*** Even though I enjoyed the book, like the last one it had some discrepancies that left me going, wait a second! I will list a couple that I think I saw. For instance, when Simon was in the jail and Raphael comes to see him Simon says it is the first time he has seen Raphael since he was turned. But Simon previously talked about how Raphael had talked to him about some stuff, plus Simon knew some of the vampires names like he had hung out with them a couple times. Also, Simon said that after he was a Daylighter Raphael didn't like the fact that he didn't roam at night anymore. That would make you think that Simon had had contact with Raphael before the Jail incident. Also, there was a point were Clary said she hadn't seen Magnus since he took the book from her. But, after Sebastian left Alec said Magnus helped perform the tracking spell on his stuff. Now, Clary might have not been there when that happened, but when Alec told her don't you think she would have asked about Magnus? Especially since she thought he just took the book and ran without helping her mom? Just saying... I also didn't like the fact that Max death wasn't in more detailed. How did it happen? How did Isabelle escape? It was never fully described which left you wondering. Isabelle could have told more to Simon when he was comforting her but she didn't, which left you feeling like you missed something. There were a lot of other points where I felt I was missing something, but all together I really liked the books. I liked the angles she did. Making Vampires a little different than we were use to. Making the bad guy related was also a good move too. I can't wait for the fourth installment to come out and of course The Clockwork Angel as well.

A Wonderful Ending to an Amazing Series

Published by Thriftbooks.com User , 12 years ago
"To love is to destroy." It seems to me that whenever a series comes to a close, the last book is always the darkest and most serious. At least, that's how it was with City of Glass. In the first two books, the plot revolved around smaller battles with Downworlders and demons in New York. In this one, the readers are finally exposed to what everyone's been waiting for; what all the battles, mysteries, secrets, and discoveries have been leading up to. This book captivated me from the very first page and kept me fascinated until the last word. Cassandra Clare's character development never weakened as the story continued to grow. Every character has a clearly defined yet realistic personality that brings the story to life. Personally, I love Jace. Something about his unfailing bravery and deep feelings really drew him to me. Clary, on the other hand, often annoyed me. I found myself screaming at her and disagreeing with her on a number of things. This proves that although I may not be able to relate to Clary, her personality was realistic enough to irritate me. Simon never failed to crack me up, even when the tension was reaching a peak. I believe that Clare did a marvelous job of creating wonderful personalities that I couldn't get enough of. I often found myself comparing this series with the Harry Potter series by J.K. Rowling, which is high praise. Like Rowling, Clare weaves an intricate tale with a plot that never failed to shock me. I would begin to think I'd solved the mystery when BAM! Another surprise is thrown at you. As with City of Ashes, I would become so immersed in the book that I wouldn't realize I was squealing with delight until my sister looked at me as if I were insane. In the end, the story is tied up with a nice little bow, which I liked. There's nothing more annoying than a story without a proper ending. Overall, I congratulate Clare for conjuring up such an unforgettable tale. I would definitely recommend this book to anyone who enjoys a great romance and action novel.

Published by Thriftbooks.com User , 13 years ago
This was a great series that kept you going till the end. would reccomend it to anyone!

Published by Thriftbooks.com User , 13 years ago
This is the final book of the mortal instruments. I loved every single one of the books. Once you start reading these books, you won't be able to put them down, a great addiction!!

Published by Thriftbooks.com User , 13 years ago
I couldn't have asked for a better ending. I got everything I wanted. I don't want to summarize the book, I'll leave that to others, but I will say that there are some heartbreakingly beautiful scenes in this book. The characters became more developed and more endearing, especially Jace. His sarcastic wit is certainly present in this book; however, he is no longer hiding behind his carefully constructed facade. His torment over Clary is glaringly obvious from the first chapter. I noticed that another review stated that she wished Clary and Jace hadn't have been as close as they were until they knew the truth about not being related, but I have to disagree. Clary was the only person in the world that made Jace feel like he belonged and she was the only person he belonged to and the fact that she didn't turn away from him when he told her that he loved her probably meant more to him than her waiting until she knew the truth to love him back the same way. He had resigned himself to love her always, no matter what, and I'm glad that he got to know that she had resigned herself to the same fate. Cassandra Clare works magic with this novel. The excitement begins on the first page and doesn't stop until the final sentence. She brings everything full circle for a completely satisfying ending - even though fans would be more than happy to read about these beloved characters forever, I know I will miss them.
Trustpilot
Copyright © 2022 Thriftbooks.com Terms of Use | Privacy Policy | Do Not Sell or Share My Personal Information | Accessibility Statement
ThriftBooks® and the ThriftBooks® logo are registered trademarks of Thrift Books Global, LLC