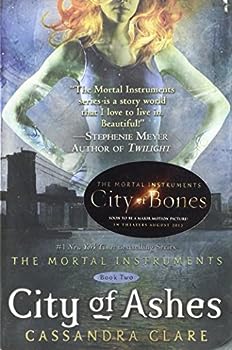 Is love worth betraying everything? Plunge into the second adventure in the internationally bestselling Mortal Instruments series and "prepare to be hooked" ( Entertainment Weekly )--now with a... This description may be from another edition of this product.

Published by Coreystest , 4 months ago
this is a test of the review system

City of Ashes by Cassandra Clare A Review

Published by Firebrand , 1 year ago
I just finished this book! Valentine is everyone’s worst Nightmare! He killed the Silent Brothers in order to get their sword, it was the original sword GOD gave a Cherubim to keep Adam and Eve from the Garden ofEden! Thus, this sword, called “Malleartach” Is a Mortal Instrument! Yet Valentine cannot yet wield it fully until he can bring it under his power by using other’s Blood! So he must kill a Werewolf child( or a teen under age 18) for that Blood;and a Vampire child, also for Blood; and a Warlock, also for Blood; and he needs a fourth demons Blood too! So the entire book, largely about Clary and Jace and their burgeoning love! Plus Simon, Clary her best friend! And as Clary begins to learn she has the Sight and is a very unique ShadowHunter too! Yet Clary and Jace learn a terrible secret! They really love one another, yet, they are Brother and Sister! And Valentine is their Father, and Jocelyn their Mother!A shocking revelation to two who are in love, to suddenly, sickeningly learn, they, are brother and sister, reared entirely apart! Yet they are still in love!!

It will leave you loving and hating it when you finish!

Published by Jeanie , 2 years ago
Jace and Clary’s relationship just got a lot more complicated! Is the family stories truth or manipulation? This book will leave you hanging and longing for more.

Published by Eris , 2 years ago
Oh, man! I liked this book more than I liked City of Bones. Isabelle is, in my personal opinion, the best character. Jace has a special place in my heart, along with Clary. I was disappointed with the lack of Chairman Meow, though. 4/5

Published by G , 3 years ago
This book was great. Reading the first book of the series, I was instantly in love with the characters and their world. The second book was not a disappointment. I enjoyed reading every page and had no issues with the shipping.

Published by Bianca , 3 years ago
I was super excited to purchase this book because I had already had the paperback but wanted to finish filling in my hardcover set, and when this book came in I was mortified. Fortunately it was hardcover like I ordered, but it was not in good condition, there was a huge stain of some sort that covered all of the pages. The pages are wrinkled as if water had been spilt on them, and I have never had this problem before and I’m really disappointed. My other good condition book came in and it was as I hoped, no shaken and no pages pushed in.

I really enjoyed it!

Published by Amber , 3 years ago
I really enjoy this series! If you did to, I recommend the The Infernal Devices series!

love this new type of fiction

Published by aw , 3 years ago
This book series is one of my favorites.

Published by Thriftbooks.com User , 12 years ago
To anyone that has read City of Bones, City of Ashes does not disappoint. It will keep you hooked to each page and thirsting for more. Give it a chance.

Good second helping, and going back for thirds...

Published by Thriftbooks.com User , 13 years ago
As the second installment of the Mortal Instruments trilogy, the Shadowhunters have to deal with the fact that Valentine, a charismatic, brilliant man bent on their destruction, is alive and well, and not dead as they once supposed. Some shadowhunters believe that Valentine's son, Jace, may have conspired to spy for Valentine and help him all along. Clary, the heroine, is caught in the middle of her love for Jace (who, according to Valentine, is her brother), trying to find a way to wake up her comatose mother, trying to find it in her heart to love her long time friend, Simon, the way she loves Jace (who she thinks she should not love, because he is supposed to be her brother), and trying to stop her father, the cruel and merciless Valentine, from summoning a hoard of demons to kill everyone in the Clave, or those belonging to the shadowhunter world. And as if these concerns were not enough, Clary also starts having strange dreams and begins to realize that she has certain powers that not everyone in the clave have, a fact that could make her an asset and a target. Fairies have a larger role in this novel than the last one, and vampires and werewolves are still on the scene, as in the first book. Simon, Clary's best friend, also becomes a part of the shadow world, so he is no longer an outsider looking in on Clary's new life as a shadowhunter, and has a prominent role. Many parents/teens are concerned about the appearance of sex/drugs in books, so I will mention that this book is clean of both. There are no drugs, sex may be referenced once or twice, but there are no sex scenes. There is, however, one amazing kiss in the fairy court that changes a couple of lives, as well as some other kissing and moments of romance that are short-lived but sultry. This book is more about love than lust. I loved the scene where Valentine was about to kill Simon and Simon could not pray, so he said the only word he could think worth saying, which was absolutely heart-wrenching... I loved the scene where Clary brought Valentines entire enterprise crashing down...I loved how we get to see Magnus start to connect with Alec. I know I should not put too many details about the book in the review, but I just had include those three things. There are probably about a dozen more I could include. I really love this series, even though you still think Jace and Clary are related throughout this entire book (but you may doubt it) and they are very obviously in love.

Published by Thriftbooks.com User , 13 years ago
The suspense was too much!! She loves to torment her characters. You just had to keep reading. I love how the story slowly unravels throughout each book and the entire series. Excellent!

Published by Thriftbooks.com User , 13 years ago
The fantasy genre is well known for taking rich, varied, and well known mythology and twisting it up in new ways. Or at least, attempting to twist it up in new ways. Because let's face it, the vampire has already been invented. Now it's all about what you do with him. So first, the really good- Cassandra Clare does a mighty fine job of taking rich and varied and well known mythologies and giving them a brand new spark of life that has not been written into the ground already. I enjoy that she picks bits of mythology from all over and uses it to create a world full of truths and half-truths and the people who have to deal with it all. This isn't just another fantasy novel. It reminds me of The Dresden Files for young adults. The other really good thing about this book, is that the characters are a lot less cliched and stereotypical than most books in this genre. The main male character, Jace, might be pretty and the love interest (more on that in a moment) but he is also haughty, cocky, unlikeable and reactionary. She writes him so well that I sometimes find myself irritated with him- a beautiful and well drafted flaw. Who says our heroes need to be perfect anyway? This is also somewhat of a problem for her though too, because she tries so hard not to write predictable characters that they tend to fall out the other side of the extreme. I'm also delighted by her fight scenes, which are clear and well written but not long and drawn out. Fight scenes have a tendency to be repetitive. She knows when to get on with it. The bad- some of the prose is a little watered down. Contrite but clearly written with pleasure. Clare has never met a metaphor she didn't like. Still, the book was a page turner- I ferreted away in an empty cubicle at work to devour it during my breaks, flowery language or not. The weird (and ugly)- The romance is bizarre. It's not even thinly veiled incestuous desire...it's right in your face and deals with it in a way that is going to make a lot of people uncomfortable. It makes me uncomfortable. I was at first horrified by her choice. Why would an author do this? But I am a little impressed with her ballsy choices for romances- a very homosexual blooming romance and a heartbreaking passion between two people who only recently found out their brother and sister. That's gutsy, and I can't say I haven't been craving some gutsy romances lately. But like I said, the incestuous romance is so weird it's not good. It reminds me a lot of the incestuous romance in The Royal Tennenbaums. I'm pretty sure we'll find out they aren't brother and sister, but honestly, the damage has been done. Finally- I like Clary. She's weak and flawed and easily scared and up until the end of the second book, she's sort of a liability in every dangerous situation she's been in. And that makes sense, up until a very short while ago, she was a normal girl getting dressed up to dance at a goth club. It does surprise me though that no one offers to help her be

Published by Thriftbooks.com User , 13 years ago
I loved this book so much that even though I usually just get my books from the library I bought it and the other two books in the series. Cassandra Clare is one of the best authors I have read. I would recommend this book to anyone who likes vampires, werewolves, fairies and anything else supernatural, it has everything.
Trustpilot
Copyright © 2022 Thriftbooks.com Terms of Use | Privacy Policy | Do Not Sell or Share My Personal Information | Accessibility Statement
ThriftBooks® and the ThriftBooks® logo are registered trademarks of Thrift Books Global, LLC