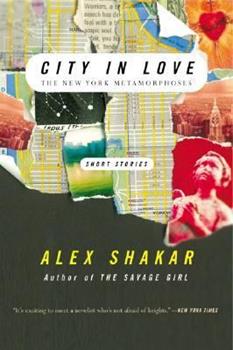 A City Dangerous, Seductive, and Strange Set in a fantastical New York City of 1 B.C., these seven stories are a stunning mythic vision. In odysseys that wind through urban streets, Shakar's modern characters pursue their quests and meet their fates. Roxanne, a schoolgirl superhero from Queens, saves the day at a brutal playground. The Junk Man build his lady love from trash he finds while Dumpster diving. A tough police detective comments on a city's...

Published by Thriftbooks.com User , 12 years ago
I bought this book with the intention of rereading Ovid's Metamorphoses first (the Ted Hughes translation). Unfortunately, my timing was off, and I didn't get to this book right away. I cannot comment on the veracity of all the myths, as I deliberately chose not to go back to read them. These stories are interpretations, not transliterations, so I read them as such. As this is the writer's first book, not to mention that he comes from an esteemed writing program, I see this as a prosaic experiment. I agree that the myths seem at times, incidental. If we judge the stories on his faithfulness to Ovid, I suppose "Waxman's Sun" "A Million Years From Now" and "On Morpheus, Relating to Orpheus" seem to work more consciously with the storyline. They also stuck with me as a reader more than the others; however, that doesn't mean his experiment is a failure. I found his prose style fascinating. For each story, he chose a different voice, a different style of language and he even played with the conventions of narrative--"City of Love" is a perfect example of the latter. By engaging in such inventive prose methods, he summed up New York City perfectly, as it is a polyglot of culture and socio-economic class. Like Rome, people go there to be part of the power source: I have so many friends who went to NY to become actors, writers, dancers--it ran the gammet of the arts. New York is a place for the wealthy to have a second or third home--almost always a condo as it is nearly impossible to find a house in the city. With so many people stacked on top of each other, the city is both the center of life, and the heart of darkness. Ancient Rome was a filthy place. Right now New York is overrun by bedbugs and rats. The apparent randomness of Shakar's prose style captured that hustle and bustle of the overcrowded city, where people will knock you aside to get on the subway. This will never be a popular novel, but if I wanted to teach students how to work with prose, I would make this text mandatory. It doesn't matter that some of Shakar's reworkings of the myths seem contrived; for those who judge the book as such are missing the main point of the narrative. The author exposes inconsistencies in the urban experience through a variety of voices. Large cities, with all their problems and gifts, haven't changed much since Ovid's time. Take the work for what it is, not for what you think it should be.

Published by Thriftbooks.com User , 18 years ago
I had to comment, because the reviews currently listed here rather missed the point of this collection. I don't just mean the Ovid allusions (which are more often irrelevant than crucial to understanding the stories). Shakar takes each myth and explores the psychological and emotional elements, emerging with something ancient and something new. "Maximum Carnage" is perhaps the subtlest of them. It begins with the tale of Caenis/Caeneus from Ovid's Metamorphoses, and focuses on the rape element. Roxanne's own violation is presented subtly and in chillingly sinister allusion. Her fixation on penetration and bloodshed is depicted in what seems a nauseatingly realistic way. In the end he seems to attribute trauma not to the media violence children encounter (video games, etc), but to the violence children experience at the hands of adults and each other. On the other hand, it is interesting that Roxanne chooses to express her trauma in the language of video games and comic books...The last story uses an experimental narrative technique that works well with the subject matter. It offers an oddly hopeful and optimistic outlook, but only to those who will listen to the voice in their ears. The "end" is a bit confusing, and made me wonder whether the second-to-last number on the last page might be a misprint.Yes, read these stories. They are less about a city than about civilization (which hasn't changed much since Ovid's day).
Trustpilot
Copyright © 2022 Thriftbooks.com Terms of Use | Privacy Policy | Do Not Sell My Personal Information | Cookie Preferences | Accessibility Statement
ThriftBooks® and the ThriftBooks® logo are registered trademarks of Thrift Books Global, LLC