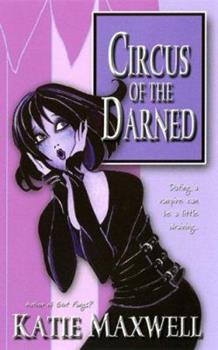 Circus of the Darned

As Fran travels around Europe with the GothFaire, she has to deal with hundred-year-old ghosts, a paranoid mother, and the rules of dating one of the undead.

Published by Thriftbooks.com User , 13 years ago
If you haven't read Katie Maxwell before, you should definitely give her a try! I have not only read Got Fangs? and Circus of the Darned, but I have also enjoyed her adult books, written under Katie MacAlister. Ms. Maxwell/MacAlister is truly someone to be admired! Her books are creative genius that make the reader come back for more. I can honestly say that out of all the paranormal authors I enjoy reading, that she is at the top of the list! --- Jessica Jessica Coulter Smith Author, Paranormal Romance "Whispering Lake" coming Nov. 2008

The Perfect Follow-Up to GOT FANGS?

Published by Thriftbooks.com User , 15 years ago
If you like vampires, Vikings, Goth Faires, Valkyries, and people who believe that a young girl just might be the reincarnation of Cleopatra, then CIRCUS OF THE DARNED is definitely the book for you! Fran is back, still traveling with her mother and new-found friends throughout Europe with the GothFaire. She's got a kind-of, sort-of boyfriend, Benedikt, who just happens to be a vampire. Oh, he also claims she's his beloved, but since they haven't even been out on one actual date yet, Fran is withholding judgment. Now she's waiting for Ben to show back up at the Faire, since he took off without a word to anyone to who only knows where. Tibolt, one of the men involved with Circus of the Darned, whose traveling with the Faire, is driving all the ladies on the fairgrounds crazy--maybe due to his charming good looks, but quite possibly with help from a little magic. When he asks Fran to hold on to his valknut pendant, she's happy to oblige. Turns out Tibolt doesn't want to get the pendant's power near the old Viking burial ground during his ritual sacrifice to the gods. The only problem is, he doesn't quite explain this plainly to Fran, who ends up running through said burial ground while wearing the pendant and chasing after a huldra. And all this after a strange man came to the Faire wanting to buy Tesla, Fran's old horse. Needless to say, the raising from the dead of an army of Viking warrior ghosts doesn't sit well with anyone, since their main form of entertainment is still, well, pillaging. Fran has no idea how to send the Vikings on their way to Valhalla, so she's stuck babysitting corporeal ghosts until someone can get them gone. As Fran recruits help in finding out the best way to do this, all manner of gods and goddesses come into play--not the least of which is a pretty bad one, who has an unhealthy obsession with the horse Tesla. CIRCUS OF THE DARNED is another laugh-out-loud paranormal delight. Katie Maxwell always does a great job of drawing on myths and legend for her storylines, and this book is no different. I can't wait to read the next installment, which hopefully with have Fran and Ben finally being able to go on that first date! Pick up a copy of the book today...you won't be disappointed!

Circus of the Darned

Published by Thriftbooks.com User , 15 years ago
Fran has adjusted to life in Europe, pretty much, and to the fact that she is Ben's Beloved to be. That does not exactly mean the teen is his girlfriend; Ben is a vampire, and the Beloved is the mortal woman, in this case, girl, who is his soul mate. The link is essential for the vampire, but has great potential for inconvenience for the Beloved. Having a mother who is more than a little worried about her relationship and a time-travel counselor who'd like to steal said boyfriend is not helpful. However, all the drama surrounding Ben is not Fran's primary concern at the moment. Some strange guy wants to pay her a thousand dollars for her battered horse, Tesla. First off, Fran loves her horse; second, she gets a strange vibe off the guy (she's a little psychic), and therefore, it's no deal. Then, Tesla disappears. That's just the tip of the iceberg. Somehow, Fran manages to conjure up a band of Viking ghosts who think she's a goddess, love to shop, and have entirely too much dating advice for their goddess. On the plus side, they are kind of endearing, and are very willing to go to war with Loki for her, which is good because Freya, as in the goddess, is more interested in partying than helping Fran take care of the Vikings and Loki. Somewhere in there, Fran would really like to go on her first date with Ben, right after she takes care of her holy war. ***** If your resolutions for the year include laughing more, then buying this book will help you keep it. The Vikings almost steal the show, which is of course, fitting, as they are Vikings and like to pillage. Whatever age you are, then this will bring a grin to your face, not just a smile. ***** Amanda Killgore

Katie Maxwell Proves That She Has Bite...

Published by Thriftbooks.com User , 15 years ago
Francesca Ghetti, to-tall teenager and psychic extraordinaire, is finally learning to adapt to her somewhat...abnormal way of life. After all, having the powers to summon the dead, and being the daughter of an actual witch is more than exciting, when you actually think about it. While everything is crazy in Francesca's life, however, her mother only chooses one thing that upsets her, and that's Francesca's boyfriend, Benedikt Czerny. Benedikt is centuries older than her, and possesses a strange tooth problem...he has fangs. And, as he reveals that Francesca is his life mate, he also reveals that to seal the deal he must give her the kiss of death, and bite her, as well, in an attempt to make her a night person as well. But Francesca doesn't know how well she'll adapt to the life of a night person. After all, she has a curfew. Katie Maxwell is a wonder, who has the talent to write anything that comes her way, be it teen fiction, or paranormal fiction. Her writing is fresh, and interesting, and keeps the reader turning pages long into the night. Her character of Francesca, like her Emily character, faces the normal teenage problems, only with a twist, and makes for an interesting character to relate to. CIRCUS OF THE DARNED is a marvelous sequel to GOT FANGS? and could, quite possibly, be even better than it's predecessor. I can't wait to see what will happen to Francesca next! Erika Sorocco Book Review Columnist for The Community Bugle Newspaper
Copyright © 2020 Thriftbooks.com Terms of Use | Privacy Policy | Do Not Sell My Personal Information | Accessibility Statement
ThriftBooks® and the ThriftBooks® logo are registered trademarks of Thrift Books Global, LLC