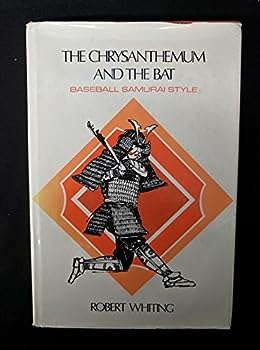 The Chrysanthemum and the Bat: Baseball Samurai Style

Rare glimpse of the true story of Japan and Japanese through Baseball This description may be from another edition of this product.

Published by Thriftbooks.com User , 18 years ago
It's now been nealry 30 years since The Chrysanthemum and the Bat was first published, and Japanese baseball (and Japan) have both changed a great deal in that time. Whiting has since published two more books on Japanese baseball, You Gotta Have Wa, which is very good, and The Meaning of Ichiro, which I unfortunately haven't read yet. If you're looking for a view of what the current era of Japanese baseball is like, you should definitely start with those books. Definitive though it may have been when it was released, and I have little doubt that it was, TCATB now exists primarily as a cultural artifact, and is only worth tracking down if that's what you're interested in.
Trustpilot
Copyright © 2022 Thriftbooks.com Terms of Use | Privacy Policy | Do Not Sell My Personal Information | Cookie Preferences | Accessibility Statement
ThriftBooks® and the ThriftBooks® logo are registered trademarks of Thrift Books Global, LLC