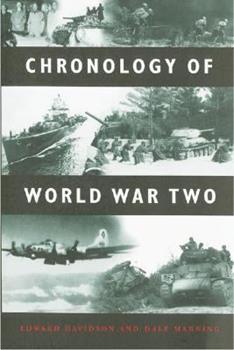 by Dale Manning and Edward Davidson

The rampaging Blitzkrieg techniques of the Nazis overwhelmed the nations they invaded so suddenly and completely that even now, more than 50 years later, experts still attempt to sort out the facts. This valuable chronology clarifies the confusion and shows each step in the Axis nations' plans and executions of their invasions, side by side with the Allies' repulsions of the assaults and their build-up toward eventual victory.

A Great Resource for all Students of World War Two

Published by Thriftbooks.com User , 16 years ago
World War Two was, and still is, the greatest war ever fought on the face of this world. When Adolf Hitler allied himself with Benito Mussolini of Italy and the Japanese Empire, he set in motion a war that would encompass the entire world. Although it is suggested that we learn history because we "need to learn from our mistakes," textbooks are not always the best way to reach out to students. Chronology of World War Two by Edward Davidson and Dale Manning gives a great guide to learning the details of this momentous event in history. This Chronology is organized by date and lists all the events of every battle, treaty, and armament, as well as political events. It makes an obvious choice as both a reference book and a straight-through read that helps readers determine the specific events of this war. It is written in an exciting prose that gives concise yet accurate details on every portion of the war. It is not necessary to come in with any background knowledge; a pretext and postscript are both given which discuss the impact and situation that the world is in. This novel is a compelling narrative that gives the basic premise, the basic plot, and the basic implications of this tragic event. Perhaps the best thing that the book can give is a look at the fragile state that the war always existed in. For example, such a little thing as 100 German fighters, which were ordered to protect Berlin instead of participating in the Battle of Britain, could have tipped the balance in German favor. If Britain would have been defeated, what would the world be like now? Would Russia still be able to stand up to Germany's full army, instead of only having to face a portion of it? Could the United States fight a war against Japan and Germany with no support from its two greatest allies? Although we can breathe a sigh of relief today, it is a depressing thought that the world was close to such a situation. This book helps break down World War Two so that all may understand, and I highly recommend it to anyone interested in this war.
Trustpilot
Copyright © 2022 Thriftbooks.com Terms of Use | Privacy Policy | Do Not Sell My Personal Information | Accessibility Statement
ThriftBooks® and the ThriftBooks® logo are registered trademarks of Thrift Books Global, LLC