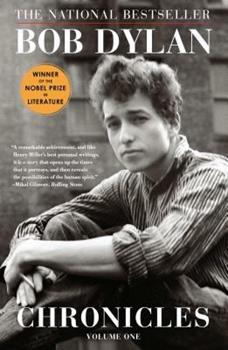 WINNER OF THE NOBEL PRIZE IN LITERATURE The celebrated first memoir from arguably the most influential singer-songwriter in the country, Bob Dylan. "I'd come from a long ways off and had started a long ways down. But now destiny was about to manifest itself. I felt like it was looking right at me and nobody else." So writes Bob Dylan in Chronicles: Volume One, his remarkable book exploring critical junctures in his life and career. Through Dylan's...

More and less of what everyone seems to want from Dylan, again!

Published by Thriftbooks.com User , 13 years ago
Simply put, I loved Chronicles, incomplete, yes, though it may seem to some, perhaps for that very reason. This writer struck me as Bob Dylan, the normal guy, raised in Hibbing, Minnesota, who happened to find what he loved to do at early age and had to leave because there was no real community for him there, not because he hated his family, or really, even, rejected their values. His love of wife(ves) and children and family come back time and time again in this work. This is just a guy who does what he does because he can't do anything else and the world morphed him into an unending number of prism images of what it wants to see. He may be some of those tings, but as this work makes clear, he has never been nor ever will be ALL of those things. And so someone, some critic, some generational community will always be pleased with and critical of him at the same time, because ultimately he is just who he is and not whoever whoever would like him to be. It sounds like Dylan will continue to tour until he is physically unable...he's called it "the neverending tour" and considers it his debt to God. I saw him two or so years ago and I truly thought he sounded like he'd had a stroke. I also had heard that he suffers from bad back pain so can't really stand anymore with his guitar. Who knows? Maybe at his next show, he sounded different or stood for hours with his guitar and harp. Never mind, the next time he's in the area, I will be among the first buying tickets. There is, after all, only one Bobby, and there will never be another one like him. As T-Bone Burnette said, and I agree, Dylan is the Homer of his time. Get his records and by all means....read the book. It may not be perfect to you but it feels to be the truest statement we have had about him so far. He may or may not throw out any more.

Gotta Love It Despite Its Omissions

Published by Thriftbooks.com User , 13 years ago
After reading the last page, you'll know more about Dylan than you knew before, but don't expect to find all the answers to the enigmatic Mr. Zimmerman, who chooses to remain as reclusive in his prose as he does in his life. The book is a delight to read since Dylan's prose flows, and the book is most decidedly a page turner. He provides many insights into his thinking as he haltingly takes us from the time he arrived in New York City to the days of his mega-fame. In the pages of CHRONICLES, we see a man who is a keen observer, but also one who is far more pedestrian in his views than anyone would have guessed. He speaks at great length about how goofy the 60s and the counterculture looked to him, and his discussion of raising his children and walking his dog like any other parent is endearing. Dylan's chronology is difficult to follow since he continually fast forwards in his description of events, and one is often not quite sure what period of his life Dylan is referring to. He names no years whatsoever by which we can match action and time. What is especially annoying is that entire periods of his life are simply missing. He goes from being a new arrival in New York, living from hand to mouth, to becoming a pop icon (a term he detests) within a matter of pages, no explanation given. Blink an eye, and he's suddenly recording the album OH MERCY in New Orleans in 1987. With major portions of his life omitted, it is impossible to discover the reason for changes in his philosophy or musical styles beyond a certain point. Ultimately, this is not autobiography, but rather observations about life. But that's okay. His narrative is nevertheless powerful and engrossing. His prose, bordering on the poetic at times, is accessible and puts us in touch with a man who has sought to write songs and live his life. While he may have chosen to skip over major events in his life, what he gives us is pure gold. He has allowed to eavesdrop, as it were, on select moments of his life. That's worth the price of the book.

More scenes from a life than an autobiography

Published by Thriftbooks.com User , 14 years ago
My copy of the paperback comes loaded with a long listing of all who chose this as their Book of the Year on release - while understanding their joy at Bob opening up on his life in Volume 1, unless followed by further volumes, Chronicles is in danger of leaving many wanting. This is because the book in structure while using an interesting forward and backward time structure centred around the creation of Dylan's songwriting style, with the exception of one chapter actually gives very little away. The book starts with Dylan just signed to CBS and laying down some of the myths that clouded early bio histories. After 20 pages it reverses back to arriving in New York and covers at length how he moved around sharing people's rooms and taking in all the influences available (everything seems to get name checked in the process) with the central theme of how he took time to develop his approach to songwriting. Skip forward (briefly) to the recording of "New Morning" and a parallel project with poet Archibald MacLeish who wanted some songs for a play he had written (which is clear will abort from the way Dylan writes about it) but then to the longer key counterpoint chapter to his earlier arrival in New York. This is how in the mid-1980s, after feeling a need for change post the dire prior recordings of the 1980s, he recorded "Oh Mercy" with Daniel Lanois producing in New Orleans. The coverage of how Dylan dealt after an accident that hurt his arm and just before setting off on touring, shows a clear case of knowing he was on an artistic slide. The time taken to get to acceptable compromises to finalise the recording after taking a long bike ride to settle his muse are easily the best part of the book. They also dispel the often quoted myths that Dylan writes his songs in one go and then records very quickly. His skill seems to be he writes a lot quickly when motivated and then scales these verses down in the studio. As the detailing of the recordings shows they were painstakingly rehearsed and developed, with Lanois being an ideal counterpoint in this. A final closing chapter of back to the early 1960s with a mix of his trip to get to NY via a long stop over in Minneapolis and how in New York he started using records and singers heard (notably Guthrie, Dave van Ronk (the critical influence of his first LP) and Joan Baez) to start creating his own songwriting style driven especially after hearing Robert Johnston's recordings. What is clear is that if Dylan wants to, the continuation of the Chronicles filling in the gaps (especially the 1960s and early 1970s) will be needed to make this a true autobiography rather than a few chosen scenes from his life to date.

So much for enigmas

Published by Thriftbooks.com User , 17 years ago
When I was in college back in the mid-1960s, I remember a piece in the student newspaper that sought to explain the new folk music phenomenon Bob Dylan. I wish I had a copy of that story today, just to see how it matches up with the man revealed in Dylan's new autobiography, Chronicles Volume One. My dim recollection is that the sophomoric student article painted Dylan as an inscrutable eccentric trickster, deep yet elusive. That's pretty much the general impression I've had of Dylan since I first heard him around 1964 or '65. And, of course, I thought of him as the conscience and voice of my generation. Well, it turns out that he's neither, as least not in the way most of us thought. Dylan, in his own words, comes across as a regular guy who just wanted to do his job and go home to his family without being hassled by every freak and geek who imagined him to be the new Messiah. In a recent radio interview on NPR - the first he's given in my memory - he's asked if he ever thinks about walking away from music. "Every day," is his comeback. The book reveals a devoted family man who has spent much of his life plugging away at his craft and trying to shield himself and his loved ones from the glare of offstage attention. The further I went in the book, the most shared impressions and cultural perceptions I discovered. I became a grandfather earlier this year and have been wrestling with the idea and its implications of advancing age and life changes. I feel a whole lot better about it now that I know Dylan owns a "World's Greatest Grandpa" bumper sticker. Oddly enough, many of us thought of him as the voice of our generation while at the same time seeing him as detached and set apart from the rest of us. It turns out that he's much more one of us than we realized and it's probably more accurate to think of him as the voice of every generation, whether they know it or not. This is an invaluable book because it demystifies Dylan and blows away all of that "mad genius" stuff that has swirled around him for 40 years. My son, who owns a recording studio, is getting this book for his birthday this year for a variety of reasons, not the least of which is the chapter on working with producer Daniel Lanois in New Orleans. I find maybe two books a year that I just can't put down. This is one of those books.

Published by Thriftbooks.com User , 17 years ago
From one of the great music talents comes a masterful memoir of life in the early stages of his life. It is well worth the purchase and you will find it to be most memorable. Other memoirs to look for: Nightmares Echo by Katlyn Stewart and A Paper Life by Tatum O'Neil.
Copyright © 2020 Thriftbooks.com Terms of Use | Privacy Policy | Do Not Sell My Personal Information | Accessibility Statement
ThriftBooks® and the ThriftBooks® logo are registered trademarks of Thrift Books Global, LLC